Monday Forum - as you will 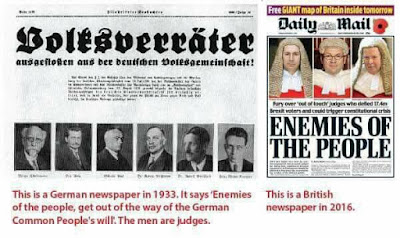 Another Monday Forum. As always, feel free to go in in whatever

The UK Daily Mail got quite upset at the High Court's decision on the Brexit matter, leading to this Twitter comparison. UK PM Theresa May has, more or less, been forced to come to the defence of the High Court.  I must say that I thought that the Daily Mail heading was quite gross.

I haven't commented on the US elections since my very brief post on 8 October, Mr Trump - you are fired. We are almost at the end of this race and the results are still uncertain. We complained about the length of the last Australian election campaign. The US campaign has been going for two years!   In How far does Section 44 of the Australian constitution actually stretch? I commented on the apparent aging of Australian PM Turnbull. under the pressures of office. How on earth does one survive a two year campaign? Both US lead candidates have clearly aged during the campaign process. What might be done to shorten the process or, more broadly, to ease the load on political leaders? Or does it matter? 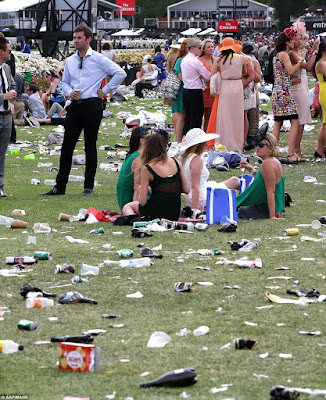 Last Tuesday was the Melbourne Cup, the race that stops a nation, well, more or less. People do let their hair done, providing lots of opportunities for photo journalists. For examples see here, here, here. This led Anna Usher in Sydney's Daily Telegraph to write a piece headed Ladies, you are an utter disgrace. It begins:


To the young women who mounted rubbish bins, vomited into paper bags, urinated in bushes and crash-tackled their friends at Flemington yesterday, I have just one thing to say: Ladies, you are an utter disgrace.

In turn, this led Lucia Stern to write a feminist ABC piece on the whole thing: Has media coverage of women like 'wheelie-bin girl' focused too much on looks and 'ladylike' behaviour? The story came equipped with a photo that arguably ran against the message.To both ladies, if I am allowed to use that word, get a life.

Yes, there was too much drinking by both sexes and I feel a bit sorry for those whose images have now been emblazoned across the web. But people were having fun. In the meantime, focus on the real problem. As illustrated by the photo I chose, there was just so much rubbish generated. Let's fix that. It's dangerous, apart from anything else.

Like many people, I have followed the US elections all day. Now before my perceptions become crowded by others' commentary, a few brief comments.

I have no idea what Mr Trump will be like as President or actually just what he will do. Like many,  I did not want Mr Trump to win. It was very much like the Apprentice come to Washington, with Mr Trump and Ms Clinton in the role of candidates with the American people in the role of judge previously played by Mr Trump. Mr Trump has made big promises, including in his Victory speech; he has made many throw-away comments. Now he has taken on a role whose powers are constrained and work within a complex system. We will just have to wait and see what might happen. None of us know. 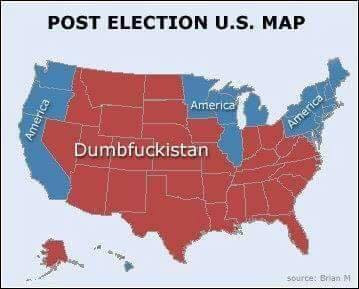 This graphic shows one reaction to Mr Trump's victory. It captures a common thread, incredulity.

Today, I found myself trying to explain what had happened. I made two points.

The first was that Mr Trump reached out to many Americans who saw themselves as disadvantaged, facing decline, sometimes economic but also culturally and politically. These were many of  the people in the UK who voted to leave the EU, now they gave Mr Trump his Brexit + 2 result.

My second point was that Ms Clinton had been a member of the established US power establishment for a very long time. She was tarnished. Because of the context of the discussion, I described it in this way. With Ms Clinton or those like her, whoever you voted for a Key Performance Indicator got in. I accept that's unfair, but I was trying to make a point.

Mr Trump appealed to those who felt disadvantaged, threatened. They covered a number of groups, including conservative evangelicals, but for most it was the loss of the American dream. The problem for this group is that when the establishment appears to offer nothing that might redress your decline, that might improve things, you will go with some one who at least appears to offer a choice. In many ways, it's the only sensible choice.

Well, he still might not pull it off, but how sweet will be the desparate back-pedalling of all the so-called pundits :)

Won't change a thing, I know, but the likes of Paul McGeough at the SMH moving from "explainer" to "analysis" to "opinion" articles - and then rapidly back again. I hope they all get fired for incompetence.

Or, at the least, for destroying any last remaining respect one might have had for the '4th estate'.

He has! I will bring a postscript up. I take your point on Paul.

One of the things, kvd, in the various threads that I watched yesterday was a growing sense of incredulity at the result. Wearing my analyst hat, I hadn't ruled out a Trump win and could provide reasons why, but it did seem unlikely based on the polls. It was also hard to get by the group think in the reporting. "They couldn't do that" is not a good base for objective analysis, "they shouldn't do that" worse.

- to apply one my dear departed mother's sayings :)

How can anyone treat with anything but utter contempt an "analysis" which contains the words "and Donald Trump, such a dreadful man"?

Notice how Clinton's much touted "blue wall" and "firewall" of states has rapidly returned to that good old tried and truism: "the rust belt".

These people just never learn - or maybe it's just the case that they're lost for new words, so revert to old? They really should just stop talking to each other; get outside, smell the world; maybe actually visit those areas they fly over?

The last would certainly be a good idea! This may be pure prejudice, but I have argued before that Australians (and I think its true in the US) increasingly mix with a narrower slice of relatively like people and therefore do not have their views challenged.

It's funny. I was saying elsewhere that the left seems to have run out of ideas, and so has devolved back to personal insult and invective. Where were these people educated, and do they not have parents to provide some sort of role model?

Perhaps that cartoon we are all angsting about cut a little too deep.

'hope and change' sounded great - but not the second time around, and certainly not eight years later - sans 'hope', and certainly with no 'change' offered.

Anyways, that 'getfuckistan' jpeg has been floating round since 2004, as far as I can tell. Wonderful how bright, silly, things can divert from real life - like getting a job :)

Now, now, kvd! Just at the moment, bigotry runs deep on both the left and right. I have to read it, I am not referring to your comment, but to the stream of vituperation. I don't have to like it.

As we reflect on the momentous result, and the months of reporting and polling that preceded it, we aim to rededicate ourselves to the fundamental mission of Times journalism. That is to report America and the world honestly, without fear or favor, striving always to understand and reflect all political perspectives and life experiences in the stories that we bring to you. It is also to hold power to account, impartially and unflinchingly. You can rely on The New York Times to bring the same fairness, the same level of scrutiny, the same independence to our coverage of the new president and his team.

That has to be the funniest thing I've read in months.

Morning, kvd. I had missed this. Fox news coverage - http://www.foxnews.com/politics/2016/11/12/new-york-times-publisher-vows-to-rededicate-itself-to-reporting-honestly.html

I haven't been following the New York Times coverage, so not able to make judgement.