On menstruation and menopause

When I was young, my mother used to send me down to the corner store with an envelope. I would give this to Mrs Beatty who would pop away and then on return hand me a brown paper bag. It was years later that I realised that I was buying sanitary pads.

A little later, I suddenly started growing pubic hair. I had no idea what was happening. Something was wrong. Each night in my bath I would use my father's razor to shave the hair away to try to get back to my smooth skin. Eventually I realised what was happening.

There was no internet then. Years later I asked my mother what she hadn't told me about these things. She looked very embarrassed and said but we gave you a book! She may have, but I have no recollection of ever seeing it,

The Victorian period wrapped sex and bodily functions within a blanket of restrictive language, religion  and custom that would create scars lasting to this day. It wasn't until I started going out with girls and then later still after marriage and the birth of my daughters that I started too understand the female body including the impact of menstruation.

When I say body I do not mean the body in a sexual sense, but the body as a functioning physical object with all its processes. By now, I was used to going to the chemist or supermarkets to get tampons or painkillers.

This knowledge affected my management style. I became much more sensitive to changes within female staff members. If a woman was displaying signs of bad period I didn't ask are you having a bad period? After all, she might just be having a bad day and might question might be construes as an insult. I would just ask are you alright? With time and trust, this would usually be sufficient to bring out any problems.

The idea of menstruation as somehow unclean is deeply imbedded in past and some present societies. I know that this is silly, even dangerous, but the idea persists.

Later still, I was introduced to the menopause. This can be a difficult time for women. Apart from things like sometimes hot flushes and pain, it affects women's attitudes to themselves, the attitude of partners and others, It also affects sex as lubrication can be reduced.

As men age, they retain the capacity to create children but libido is reduced. As with women, many men suffer sexual anxiety, fear of non-performance, fear that they are losing their attractiveness.

This can be physical. More, it relates to a variety of things like contribution and intelligence, to the fit between people.

We presently live in a world dominated by sex and sexual activity, an obsession that would have done the Victorians proud. I wonder in all this if we are missing the point? We should be concerned not just with with activities at a point in time but with changing relationships over life.

One of the things I have been monitoring is the impact of covid on international trade with a particular focus on Australia. This also links to the relationship between Australia and China.

On 4 March  2021, the ABS released the latest trade data showing that Australia was maintaining a trade surplus in terms of goods and services. This is set out in the following graph from the ABS. 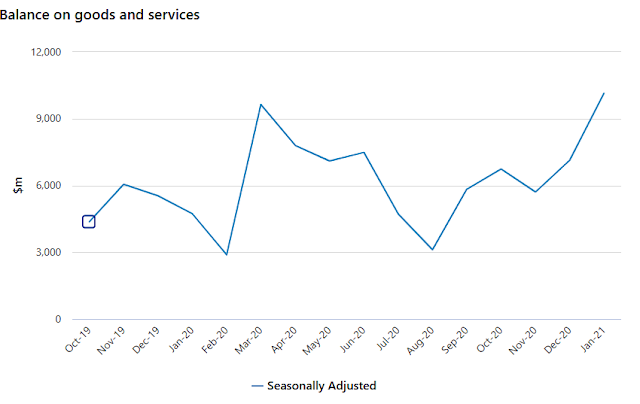 As Greg Jericho pointed out in an interesting Guardian article, Australia's economy is more reliant on iron ore than ever, the pandemic reduced both exports and imports, leaving a trade still making a positive contribution to GDP.

The following graph by Greg refers to merchandise trade, but service exports and imports both declined dramatically, leaving the position broadly unaltered. 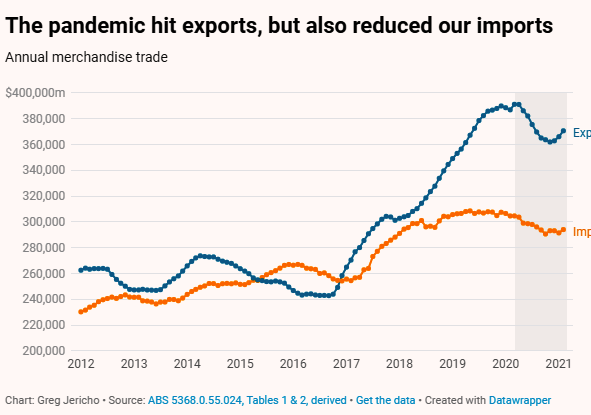 Greg also noted the growing importance of iron ore exports, offsetting declines across the board in other export areas.

China gives and it takes away. Iron ore exports have grown because China presently still needs Australian iron ore. This growth has been sufficient to offset an average  40% decline in most other Australian exports to China, with some exports blocked entirely.

Greg suggests that the growing dependence on iron ore reveals and conceals a narrowing of and potential fragility in Australia's export base. I agree with him.

Setting myself a challenge

I think that I have something like six part completed posts written over the last two months. I know that I should have finished them but events - personal and external - intervened.

This morning in a an interview with the ABC's Fran Kelly, Federal Communications Minister Paul Fletcher made the point that the business of Government has to go on regardless of current controversies. I immediately said yes!

Like many Australians, I am disgusted by some of the allegations now coming out. Like many older males, events over the last few years have caused me to reflect on my own past. And yet I am very conscious and indeed confused about present change processes, some of which threaten this country's future.

I have tried writing very short posts focused on one issue but find myself distracted.  I wonder if I can change this? We will see!

Posted by Jim Belshaw at 5:41 pm No comments: