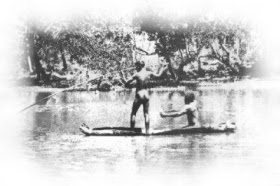 Photo: This photo is taken from the Tobwabba Art site. Tobwabba is a 100 per cent Aboriginal owned artists' cooperative located in Forster.

The picture shows one element of traditional life among the Worimi, the tribe (language group) located especially around Forster and Port Stephens.

I have so far hesitated to write anything on issues connected with Australia's aborigines because this area has become a bit of a mine field, especially for some one like me who does not have much direct contact with aboriginal people. However, events have conspired to create a need for me to make some comments.

Just to explain why.

I have been interested in the aborigines for a long time. I did my honours thesis on the economic structure of aboriginal life in New England at the time of European intrusion, drawing mainly from ethnographic records. At that stage I still planned to become a prehistorian specialising in Australian prehistory. I also wanted to write a history of New England that started by looking at the aborigines.

While at University I attended a speech by Charles Perkins. He was, I think, the first aboriginal university graduate. He made the point, one that I thought was very fair, that instead of talking about the aboriginal problem we should talk about the European problem since it was the Europeans that had created the problem.

While my career then went in different directions, I retained my interest. I built up a collection of early anthropological and ethnographic studies and followed, if at a distance, the aboriginal cultural renaissance. By the 1980s, I thought that the aborigines had come an enormous distance when looking back to that day Mr Perkins addressed us at the University of New England Union.

From my perspective the wheels then came off.

To begin with, I found myself resenting the sudden overall emphasis on the wrongs of the past that dominated discussion over the next twenty years. In parallel, all the reporting on aboriginal issues appeared to turn negative. I do not mean that it was anti-aboriginal, simply that all the stories were about problems, creating a constant negative flow that seemed to affect both aboriginal and non-aboriginal views. I started wondering just how things had gone so badly wrong.

I do not mean that everything was negative. Social attitudes do change, if slowly.

In similar vein, rise in pride in aboriginality is now having a clear impact. I have a colleague whose grandmother was aboriginal. Twenty years ago, this was never mentioned. Today it is. I suspect that twenty years from now having some aboriginal ancestry will be a badge of pride among the broader Australian community. Indeed, it already is to some degree.

The only thing that will stop this happening is if we ourselves destroy it. Here I have found my own views shifting again.

Back in 1999 I was involved with work on aboriginal eye care. The Taylor Report had pointed to a number of on-going problems that needed to be addressed. However, when I came to look at the on-ground details of eye care in NSW drawing on the work of Rosalind Hecker two things became clear.

Number one was the great variety in on-ground experience making it difficult to draw universal conclusions. Number two was the fact that in key problem areas we were dealing not just with an aboriginal eye care problem, but with a broader problem of access affecting all members of the community. Without action to address this broader problem, any specific aboriginal eye care programs must fail.

This lead me to a simple conclusion. We should stop talking about specific aboriginal problems as though all aborigines were a uniform group quite distinct from the broader community, but instead should focus on disentangling the facts so that we knew just what we were really talking about.

I must say that this remains a real frustration. We simply don't get the information we need to be able to understand, let along make informed judgements.

The second thing that happened was the resumption of my own research and especially the reading and writing that I have been doing this year linked to New England. This has shown me how little I know on some issues.

Take the family material that Neil Whitfield has put up on his blog about his family history. This contained historical details about the aborigines that I did not know, forcing me to look at some things again. Now here I actually have a personal issue that I will need to address.

When I did my historical research on my grandfather (David Drummond) my focus was on his overall role, including his long period as minister for education in NSW. While I looked in passing at the Woolbrook school incident - an important case in the history of aboriginal education in NSW - this was very much peripheral to my broader focus.

However, now that I am looking at the broader history of New England including its aboriginal people I have to address the question of his role and views on aboriginal education as an activist education minister throughout the thirties.

This brings me to my final linked point. As part of my work in trying to understand and present New England on the New England, Australia blog I have begun digging down not just into the past but also the current position of New England's aborigines. Again it shows me how little I know.

Aboriginal New England was in resource terms a very wealthy area at the time the Europeans arrived. Reflecting this, the aboriginal population especially along the humid coastal zone was very substantial. This means that today New England still has a far higher, and I think growing, aboriginal proportion of its population than the Australian average. Lower than the Northern Territory, but still up to five times the Sydney average. Further, that population is especially concentrated in particular areas.

This makes aboriginal issues and the aboriginal experience relatively more important than, say, in Sydney. My frustration here is that the fragmentation imposed on New England by current systems makes it very hard to see and understand changing patterns.

In the absence of any integrated material I am forced to try to dig down location by location to discover the facts. Without these, anything I might say is likely to have little real meaning. Further, I have found little on some of the questions that I am interested in such as the nature of modern internal migration patterns. It becomes yet another total story that needs to be written from ground up.

Jim, I have serious reservations when I read regular articles by spokesmen who attempt to represent the whole of the aboriginal community (which you say is diverse). I agree with you, we cannot refer to them as a homogeneous mass. Why do the intellectuals like Charles Perkins and others attempt to speak on behalf of all aboriginals? They should know better. As for the mood of negativity, I think it arises from the Aboriginal community who is constantly pointing the finger at the government (probably justifiably) on issues such as poor health.This is only one example. Over the last few months, I think there is at least one story per day in the newspaper regarding aboriginals. If there is negativity, it is originating from the spokesman/spokeswomen who put themselves up as representing "their people". Of course, anybody who follows these issues would get increasingly frustrated and annoyed with the apparent failures. The petrol sniffing issue, the alcohol issue, the tribal laws issue, the poor health issue, the poor nutrition issue, the housing issue, the schooling issue, the list goes on and on. Corruption and graft in ATSIC, Geoff Clark, the pedophile issue...do I need to go on? It seems to me that instead of people trying to solve these problems the focus is on who is to blame. We seem to be going around in circles with each group blaming the other but no real solutions being considered. My contribution might be naive, and ignorant but at least I try to discuss the crux of the problem rather than pointing the finger of blame.

Merry Christmas Jim to you and all your family.

Lexcen, I hope that I did not make you feel defensive, I think that you do try to discuss the crux of problems. The fact that your views are sometimes different from mine remains an important influence on the way I think.You have actually now generated more than a dozen posts of mine as I try to rease issues through.

Your point on the stories is just my point as well - the constant negative drip feed. I agree with you that some of the aboriginal spokespeople add to the problem.

I agree with this point too:
"It seems to me that instead of people trying to solve these problems the focus is on who is to blame. We seem to be going around in circles with each group blaming the other but no real solutions being considered".

This really drives to the heart of my personal concerns. When an topic is presented as a series of apparently unsolvable problems,then we all give up.

Now here I want to go back to a comment that you made elsewhere, about the aborigines you knew. Thinking about it, I know far more people with some aboriginal ancestry than I had realised. It's just that I don't really think of them as aborigines, just people.

Take one of my eldest daughter's friends from school. Yes, I know that she has aboriginal ancestry. But what's relevant is that she is Helen's friend, that she is bright and attractive, that she is good at sport and I have watched her play in the same teams as Helen many times, that she is academically bright as well. In all, a complete all-rounder.

To what degree are she and your Melbourne friends "typical" aborigines? I think that they are far more typical than most people realise, and that's a measure of success.

My problem in all this is that I just don't know enough, and I don't trust much of the information that's presented to me, not so much because its wrong but because its partial.

Fascinating, Jim, and you have motivated me to revise and republish my page on this (which was on Tripod) to WordPress: Indigenous Australians. By the way, I have also revised and augmented the family histories there.

Thank you for your comment, Neil. You have some very good material on that page.

I absolutely agree with you comment on that page re honesty. To me, honesty is respecting the facts, the evidence. I may interpret them differently, but if you do not have the fact to begin with there can be no debate.