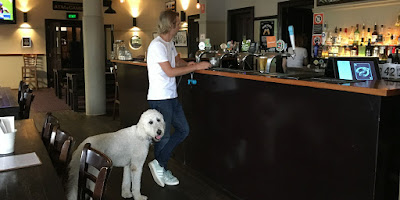 When I first went to England one thing I noticed was the presence of dogs in some pubs.

I wasn't sure about this. It wasn't an Australian practice, but I decided that I liked it.

Over recent years there appears to have been a slow expansion of Australian pubs allowing dogs at least in Sydney.

I don't own a dog at this point so this hasn't been a problem for me in a personal dog owner sense. The only issue is whether or not I like it as a customer. Again, I found that I didn't mind. In fact, having a drink with a friend who does own a dog was an enjoyable experience. The dog himself was quite fun, the dog friendly staff petted him and provided water and doggie treats, while the dog provided a very useful way of meeting other patrons and their dogs. There were very few problems. Maybe it's time I got a dog?

I see from a piece in the Sydney Morning Herald by Andrew Taylor, (Crackdown on dog-friendly pubs prompt renewed push to change law, 23 February 2020) that some Sydney councils are cracking down on venues that allow dogs. This has led Jamie Parker, the Greens member for Balmain, to re-propose a law to explicitly allow dogs in pubs.

While I am not naturally a Greens' supporter and do not know enough of either the current legislative framework or Mr Parker's proposed bill to know whether or not I agree with its detail, I am certainly in agreement with the idea that pubs should be able to allow dogs. It adds to the texture of life. If customers object, let the market decide.
Posted by Jim Belshaw at 12:06 pm 2 comments: 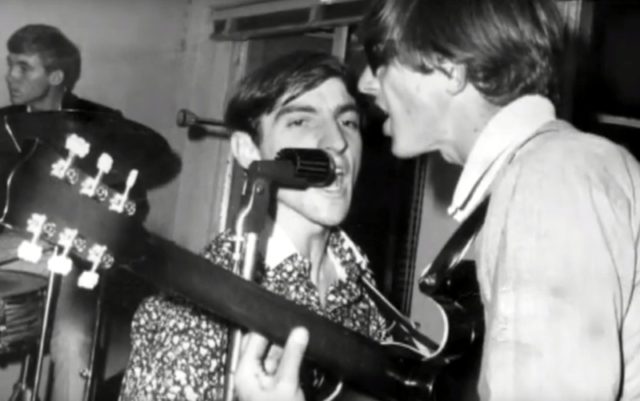 Unlike our friend marcellous, I am not especially musical. My exposure to music was limited to an old wind-up gramophone when I was young. Later we had a radiogram. That was mums and I rarely used it.

In 1965, brother David went to the Australian National University, staying at Bruce Hall  Our parents were away in Bangkok  I was working at TAS (The Armidale School) as a duty master.This involved me taking sport and acting as master on duty (it was still a predominantly boarding school) several days a week either in Broughton House or on lesser occasions for the whole school.

In 1966 I was back home. David had left his little record player and a few records behind when he moved away, so I took them into my bedroom. There was one little 45 by the Bitter Lemons. I had never heard of them, but played it quite a bit.

Formed in Canberra in 1965, David must have bought the record that year, the Bitter Lemons were quite a feature of the then very small Canberra pop scene. This YouTube video may be one of their few clips that survives.

Posted by Jim Belshaw at 5:25 pm No comments:

Drought, fires, floods and the coronavirus: "We'll be rooned (ruined) before the year is out"

Said Hanrahan is one of Irish-Australian poet John O'Brien's (Monsignor Patrick Joseph Hartigan) best known poems, one that has added the ironic phrase "We'll be rooned (ruined) before the year is out" to Australian English. The poem reads:


"We'll all be rooned," said Hanrahan,
In accents most forlorn,
Outside the church, ere Mass began,
One frosty Sunday morn.

The congregation stood about,
Coat-collars to the ears,
And talked of stock, and crops, and drought,
As it had done for years.

"It's lookin' crook," said Daniel Croke;
"Bedad, it's cruke, me lad,
For never since the banks went broke
Has seasons been so bad."

"It's dry, all right," said young O'Neil,
With which astute remark
He squatted down upon his heel
And chewed a piece of bark.

And so around the chorus ran
"It's keepin' dry, no doubt."
"We'll all be rooned," said Hanrahan,
"Before the year is out.

"The crops are done; ye'll have your work
To save one bag of grain;
From here way out to Back-o'-Bourke
They're singin' out for rain.

"They're singin' out for rain," he said,
"And all the tanks are dry."
The congregation scratched its head,
And gazed around the sky.

"There won't be grass, in any case,
Enough to feed an ass;
There's not a blade on Casey's place
As I came down to Mass."

A heavy silence seemed to steal
On all at this remark;
And each man squatted on his heel,
And chewed a piece of bark.

"We want a inch of rain, we do,"
O'Neil observed at last;
But Croke "maintained" we wanted two
To put the danger past.

"If we don't get three inches, man,
Or four to break this drought,
We'll all be rooned," said Hanrahan,
"Before the year is out."

In God's good time down came the rain;
And all the afternoon
On iron roof and window-pane
It drummed a homely tune.

And through the night it pattered still,
And lightsome, gladsome elves
On dripping spout and window-sill
Kept talking to themselves.

It pelted, pelted all day long,
A-singing at its work,
Till every heart took up the song
Way out to Back-o'Bourke.

And every creek a banker ran,
And dams filled overtop;
"We'll all be rooned," said Hanrahan,
"If this rain doesn't stop."

And stop it did, in God's good time;
And spring came in to fold
A mantle o'er the hills sublime
Of green and pink and gold.

And days went by on dancing feet,
With harvest-hopes immense,
And laughing eyes beheld the wheat
Nid-nodding o'er the fence.

And, oh, the smiles on every face,
As happy lad and lass
Through grass knee-deep on Casey's place
Went riding down to Mass.

While round the church in clothes genteel
Discoursed the men of mark,
And each man squatted on his heel,
And chewed his piece of bark.

"There'll be bush-fires for sure, me man,
There will, without a doubt;
We'll all be rooned," said Hanrahan,
"Before the year is out."


It's been a strange topsy turvey time here in Australia, one that would do Hanrahan proud.

The fires spread south with remarkable footage caught by NSW RFS (Rural Fire Service) cameras. Then came heavy rain and floods in parts of Eastern Australia that have put most of the fires out. Despite the rain, drought continues in many parts of the country. In the midst of all this came the coronavirus. The number of Australians infected is still very small, with the real effects coming from the impact of supply chain breakages and border controls. Those Australian universities heavily dependent on Chinese full fee paying students have been especially affected.

The public discussion around drought, flood, fire and viruses has been quite febrile, not helped by national politics that has taken the idea of febrile to a new level. It's hard to keep up with ministerial resignations, political infighting, application of fixed positions constantly over-run by events and a rolling National Party implosion.  Australia is fortunate that our basic systems work quite well.

The difficulty with rolling febrility that reacts to events is that we respond with emotion and then effectively roll on before issues can be effectively discussed.

The drought, fires and floods revealed some of the best features of the Australian character, the responses to coronavirus some of the worst, fear combined with a degree of xenophobia that I find repellent. There are many issues that will need to be worked through from recent events. Still, as the present king tide of events moves on, I think that it pays us to remember Hanrahan and the ironic meaning Australians attach to the phrase we will all be rooned before the year is out.