The first quake hit at 5.16pm local time on Wednesday 30 September. I am not sure when the news first reached Canberra. Not long after that I'm sure, given the speed of communications. I am not sure of current structures in Canberra, so I am working from past knowledge in describing what would have happened.

The phones would have started ringing at once. This is after hours Australian time, so duty officers would have been contacted in Foreign Affairs and Defence and planning steps put in place. Urgent briefing would have been prepared for Ministers, the Indonesian Embassy contacted if indeed it had not already advised the Australian Government. 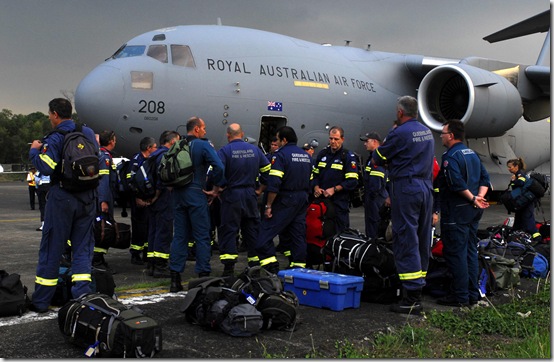 team and a RAAF health assessment team. In the afternoon, a C-17 Globemaster departed from RAAF Base Amberley (near Brisbane) with an ADF medical team and a 36-man civilian urban search and rescue team from the Queensland Government.

The photo shows the Queensland Search and Rescue team on their way to Padang.

At the same time, HMAS Kanimbla was preparing to set sail for Sumatra on Saturday 3 October with an embarked medical facility. The ship was to visit Townsville and Darwin en-route to Padang in order to pick  up additional personnel, engineer equipment and infrastructure and humanitarian aid.

Between Friday 2 October and 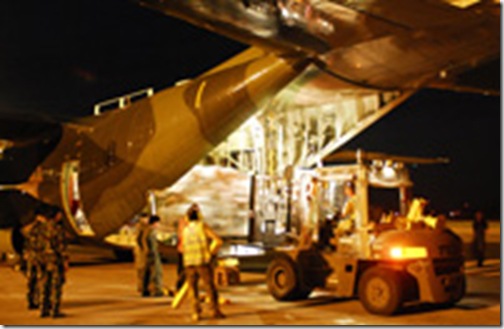 I have deliberately picked this photo because it shows Australian troops uploading a Singapore Defence Force Aircraft at Padang airport. Operation Padang Assist was an international effort.

On Monday 5 October a water purification plant was uplifted to Padang following a request from the Indonesian Government. This had tested capability with a similar plant providing support to flood-affected Queenslanders earlier in 2009 as well as being previously deployed to Banda Aceh following the tsunami and earthquake in December, 2004. The plant began operating on the following day, Tuesday 6 October, with a capacity to produce enough water for 78,000 people.

By then, RAAF C-130 Hercules, flying missions in and out of Padang from Jakarta, had ferried 250 tonnes of equipment and emergency aid from United States, the United Kingdom, Malaysia, Japan, Thailand, Singapore and Indonesia.

On 6 October too an an Australian Defence Force Primary Health Care Team and forward elements from the 1st Health Support Battalion (1HSB) - 22 specialist medical staff with stores for self sustainment and basic medical aid -arrived in Padang on a RAAF C-17 aircraft. With basic medical needs in Padang now met, the team moved to the village of Sie Geringging, a village identified by Indonesian authorities as requiring critical support.

At the same time, the advance team of Army and Air Force engineers from Darwin were inspecting government buildings to assess the levels of structural damage as well as determining what work can be done. Once established, the engineers would focus recovery work on clearing irrigation channels, repairing a damaged bridge, clearing rubble and debris from two schools. The team would also construct a semi-permanent medical centre to be used by local medical staff at 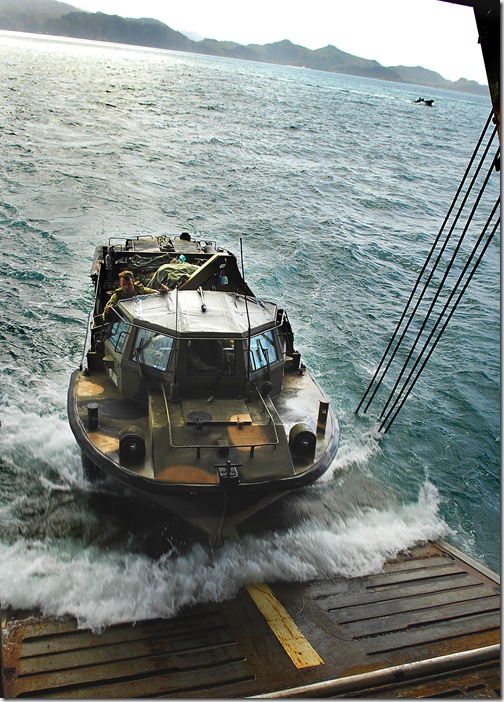 Meanwhile, planning was well underway for HMAS Kanimbla to depart Darwin on the weekend of 9-10 October, bringing its significant medical facility, two embarked Sea Kings, a large team of Army engineers and various landing craft to assist getting equipment ashore.

ADF personnel really had a busy time of it. The aircraft used in Padang went straight there from providing assistance to Samoa.

This story has dealt with just the official ADF response. Australian welfare organisations including the Red Cross, Care and World Vision were also quick to respond. Their involvement was coordinated by the UN in conjunction with the Indonesian Government.

Nothing can bring back the dead or ease the immediate distress of families suffering loss of loved ones,  homes and possessions. However, quick response can at least reduce the damage.

Looking at this story and the previous stories I have written on this general topic, the critical issues in fast response are people, equipment and logistics. You have to have the people available with the necessary skills and the equipment to support them. You then have to get both to the disaster point.

Take a simple thing like water. In natural disasters, making clean water available is absolutely critical in saving lives. Transport is required to get bottled water in. Then, as soon as possible, you need larger scale water purification on the ground. This gives time to rebuild basic infrastructure.

In thinking through just what is required to improve our collective capacity to manage natural disasters, and there will be more of them, a focus on logistics is a necessary first step.

Take HMAS Kanimbla as an example. The ship had to come from Sydney. Do we need a second Kanimbla based in Darwin? Further, how do we reconcile Australia's defence needs with the ever-growing requirement to use the ADF for disaster relief?

I do not have answers. I am simply clearing the ground by posing questions.

This post was drawn from various sources. The Australian Defence Force site was especially important.

Jim,
The earthquake has devastated Padang and Pariaman. But it's good that we are not alone in this, we have friends like Australia to help us.

Thank you, HN. Nothing can bring back the lives of those lost, nor ease the immediate pain of those whose have suffered loss of the very fabric of day to day life.

Life does go on. I met a girl from Aceh on rotary exchange the other day. She was attending a Sydney University International House function.

The more we can build cooperative mechanisms that will provide support, ease immediate burdens, aid longer term recovery,the better-off we will all be.