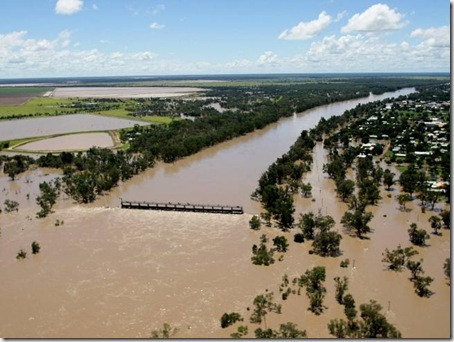 The big floods from the recent rains in Southern Queensland continue to roll south towards Lake Eyre in one direction, the Darling River in the other. This photo shows floods at St George and is from the Brisbane Courier Mail which has some good photo galleries of floods past and present (here, here, here).

Back in February I wrote of the slow ending of the big drought in South Eastern Australia. Jamie pointed out, correctly, that much of NSW was still in drought. The rains since then, including record falls around Wagga Wagga where Jaimie lives, mean that the drought has continued to ease. So far so good.

The Lake Eyre Basin is one of the world's largest internal drainage system. It covers approximately 1.2 million square kilometres of arid and semi-arid Central Australia. This is about one-sixth of the continent or the same size as the Murray Darling system or about twice the size of the US state of Texas.

Lake Eyre itself, at 15 metres below sea level, is Australia’s lowest point. It is also the fifth largest (9,690 square kilometres) terminal lake in the world, although it usually contains little or no water. Lake Eyre has its own yacht club. It aims to:

On 3, the latest status report reads: Lake wet - some water in LES (Lake Eyre South), rivers navigable. It will be interesting to see what impact the latest floods will have on the Lake. Clearly boating on the Lake has its own challenges. The LEYC warns:

Navigation is extremely difficult on the Lake. Having such a low flat horizon it is often impossible to determine features from within the mirage at a distance of 5 km. The wind is generally constant in direction which is of some help but wind driven currents of up to 5 km/hr, often hard to detect, can play havoc with navigation.

For small craft it is best to limit travel to around 10km hops. From point to point, landing to re-establish position from a higher (say 3m higher!) hill. :

A handheld GPS with storable waypoints is an essential navigation aid both on the Lake and should have to walk out.

I always wanted to see Lake Eyre in flood. Maybe one day.

Do have a browse of the LEYC site. It really contains some fascinating stuff for those like me interested in detail. Have a look at the Yachting Guide section, for example.