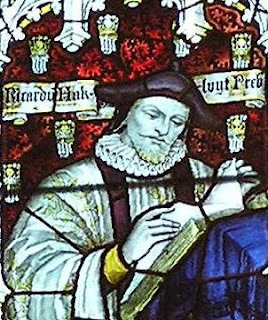 My present train reading is Richard Hakluyt's Voyages and Discoveries: The Principal Navigations, Traffiques and Discoveries of the English Nation edited, abridged and introduced by Jack Beeching (Penguin 1972). The illustration, from the Wikepedia article on Hakluyt, is the stained glass window in Bristol Cathedral celebrating Hakluyt's life.

First published in 1589 with the final and greatly enlarged version appearing between 1598 and 1600, the book is a compendium of every voyage and commercial report that Hakluyt could get his hands on. The first two reports in the edition that I have date to 890, with the majority falling to the period 1553 to 1596.

Today Voyages and Discoveries is interesting in part as travel yarns, in part because it presents eye witness accounts of events and commercial activities at a critical time in English and European history. This period saw the beginning of the colonial period with the early growth of the first overseas European empires; it saw England begin the challenge to the interests of Portugal and especially Spain (think Drake and the Spanish Armada) that would lay the basis for a wholesale land grab and the establishment of its own Empire; it also saw Europe's commercial and trade focus final shift from the traditional land routes towards the sea.

Richard Hakluyt was born at Eyton in Herefordshire in 1553, the second of four sons. His father, also Richard, was a member of the Worshipful Company of Skinners whose members dealt in skins and furs. Richard Snr died in 1557, Richard's mother soon after. A cousin, yet another Richard Hackluyt, became his guardian. Cousin Richard  was a barrister and a member of the Middle Temple'

Hakluyt was educated at Westminster School and then at Christ Church Oxford. awarded his MA in 1577. He was ordained as an Anglican minister in the following year.

Hakluyt decided to dedicate himself to what we would now call geography while still a schoolboy at Westminster. Visiting his guardian whose conversation was illustrated by "certain bookes of cosmographie, an universall mappe, and the Bible", the boy resolved to "prosecute that knowledge, and kind of literature". At Oxford, he set out to read all the printed or written voyages and discoveries that he could find and began to give public lectures on geography following his graduation.

In 1582 his first publication, Divers Voyages Touching the Discoverie of America and the Ilands Adjacent unto the Same, Made First of all by our Englishmen and Afterwards by the Frenchmen and Britons,  appeared , establishing his reputation. The following year, he was appointed chaplain and secretary to Sir Edward Stafford, English ambassador to the French court, a position he held until 1588, where he investigated sources as well as collecting intelligence on Spanish and French activities.

Following his return, Hakluyt held important positions at Bristol Cathedral and Westminster Abbey and was personal chaplain to Robert Cecil, 1st Earl of Salisbury, principal Secretary of State to Elizabeth I and James I. He was the chief promoter of a petition to James I for letters patent to colonize Virginia, which were granted to the London Company and Plymouth Company (referred to collectively as the Virginia Company) in 1606.

The combination of his publications, his church roles, his commercial activities and inheritances from two of his brothers had made him a wealthy man by the time he died in 1616. He had married twice, but there seems to have been only one son who squandered his wealth following his death.

Today Hakluyt is principally remembered for his writings and his efforts in promoting and supporting the settlement of North America by the English through those writings. His works were a fertile source of material for Shakespeare and other writers. He also encouraged the writing of historical and geographic works by others. In 1846, the Hakluyt Society was founded to printing rare and unpublished accounts of voyages and travels. A house at his old school carries his name.

In my next train reading post I will look in more detail at the book and its context.
Posted by Jim Belshaw at 11:30 pm