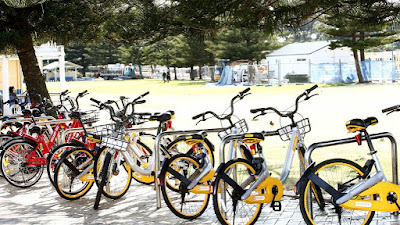 A month or so back I suddenly noticed these yellow bikes sprinkled around the area where I live. They literally just appeared. One day they were absent, the next day they were everywhere just sitting on the pavement Each had a helmet attached in some way; safety helmets are presently obligatory in Australia. A little later, a red variety appeared.

Over the next few weeks, I saw them spread around adjoining streets, just parked on the footpath or leaning against a power-pole or a bus shelter.  I even saw some Asian students from the University actually riding them.

Investigating, I found that they came from two companies, obike and Ready Go. The dockless business model was a simple one. To use the bike, you needed to download an app and pay a small deposit. Then you could select a bike, use the app to communicate with the company. They would send a signal unlocking the bike. When you reached your destination, you parked and locked the bike there. You were then charged a small fee for the time used. The GPS function on the bike allowed the companies to track the bikes.

I found the concept attractive, somehow beguiling. It would be nice to hop on a bike and go for a ride or pick one up at the shopping centre and use it to bring my shopping home without worrying about the hassle of actually owning a bike.

When I went to Copenhagen on my first visit to see eldest I saw a real bike culture of a type I hadn't seen since childhood. I became enamored with the idea, although I wasn't blind to the practical realities in Australia with its differing geography, streetscape and regulatory landscape that effectively discourages bikes. 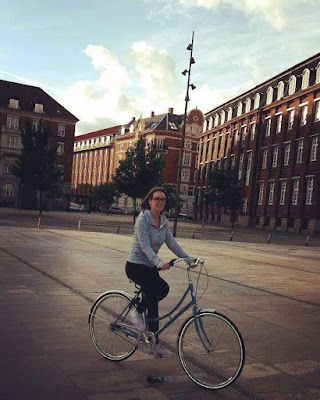 Incidentally, even eldest has succumbed to the Copenhagen bike craze, buying a bike in June.

I was curious as whether she she had actually ridden much since that first wobbly start. She has been back in Australia briefly, so at dinner last night I asked her. She has indeed kept biking, pedaling most days to work, a process that takes less time than public transport.

Copenhagen is different to Australia. Its flatter, you can apparently ride without a safety helmet, while bikes are parked everywhere. There are problems with bike parking and abandoned bikes, but they appear relatively minor.

In the weeks after I first saw the new bikes, they spread into the side streets. I saw bikes just dropped on the nature strips. I saw at least one case of a bike being vandalised as a person smashed the lock. I didn't know what was happening, it was just somebody banging at the bike, until he got on and rode away. Walking over to where the bike had been, I found the smashed lock on the ground.

I also noticed that the bike helmets were vanishing, presumably stolen, making them illegal to ride. I had wondered on this once once I saw the helmets loosely attached to the bike. 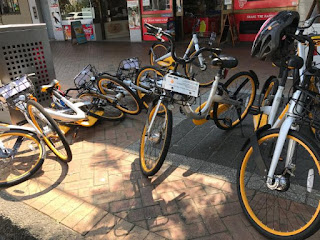 Bikes concentrated in spots.It's a downhill run from Randwick to Coogee. The cost of bike hire is cheaper than the bus. People would take a bike down and then take a bus back, leaving a growing concentration of bikes at the Coogee end.

I saw an increasing number of media stories about problems. This is one example, this a second. Councils (and not just in Sydney) started to become very concerned.about dumped and sometimes vandalised bikes as well as bike clutter, seeking new regulations and controls.

Today when I went for my walk I saw only three obikes, two vandalised. I really would like the obike system to succeed, although the odds are against it. It requires too many cultural, infrastructural and institutional changes.
.
Posted by Jim Belshaw at 6:08 pm

Even if much of Sydney presents a hilly challenge to cycling, it's hard to imagine less of a challenge than Daceyville.

That hill down to (or back up from Coogee, on the other hand....

Shanghsi is very flat. It also has advantages over Sydney of population density and low labour costs for bike retrieval, if necessary, and of course the absence of compulsory bike helmet laws.

The last have always been an obstacle to bicycle "sharing" schemes in Australia.

But the trashing/vandalization is disappointing, isn't it?

PS: sorry about the typos. Feel free to fix them.

Hi marcellous. Daceyville/Pagewood/Mascot/Rosebery and much of Kingsford/Kensington are indeed flat enough to make local biking attractive Oh, and Eastlakes, Green Square. That's quite a large contiguous area, although there are some problems in road configuration and a total absence of places to park bikes. It wouldn't be a big infrastructure challenge to fix things up, although four local government areas are involved. There is also a myopia linked to institutional structures and ways of thinking (the focus on what we might call trunk routes, the longer distances such as to the CBD) that stand in the way of seeing bikes as a device for more local travel. And then you have the helmet issue.

The shift in my own views on the bike issue dates partly from the CPH experience, but also the way that not having a car for several years has forced a degree of localisation on my views.

Trashing/vandalistion is indeed frustrating and disappointing. There is a cultural phenomenon here that has been, I think, getting worse.

On the editing point, I haven't worked out how to or indeed if I can edit comments in the blogger format.

These types of bike are prevalent in many cities in Europe. They are very heavy and don't offer much in the way of a riding experience. There are plenty of conventional bike rental shops that offer much better bikes at better rates. The internet bikes will make very heavy weather of Sydney's terrain. Helmets here, too, are an absolute pain.

Morning, DG. They are very heavy. I've picked up a couple of them that have just fallen on the footpath to repark them. Agree terrain is an issue. The question is whether the pick-up, go, drop dockless model can work. The nearest bike shop to me is a twenty minute walk. I'm not going to walk there, hire a bike, go and do my shopping, ride home to drop that off, ride back to deliver the bike and then walk home. I might walk up the road to find a bike, ride it to the shops, ride it home and park it against my front fence. But then again I might not. A two hour shopping trip would cost $8 in bike hire costs with limits on what I might carry. That is quite pricy.