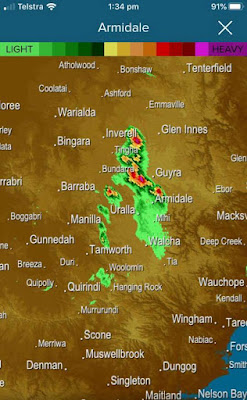 A remarkable number of people have brought rain gauges or home weather stations. There is a difference between the two, although I’m not certain of the difference. These provide ammunition for our constant discussions about the weather, plotting results across space.

Monday it did rain, enough rain that the gutters ran. I drove out through the rain just to see if the creek was flowing. It was!

The rain was not enough to ease the drought, but with other smaller falls (Armidale has had 25.6 mm so far over November) the grass has turned green and started growing. As have the weeds!

For some reason, Armidale has become ground zero in stories in the Sydney Morning Herald and on the ABC about towns likely to run out of water. Armidale has also featured in stories dealing with water problems in the Murray Darling basin.

The reality is a little different. Armidale does not lie in the Murray Darling basin. Further, on current water restrictions and assuming no rain, Armidale has enough water in the main Malpas storage on the Gara River, part of the coastal Macleay  River system, to last 371 days before Day Zero when the city runs out of water from that source.

Because of the publicity, Sydney Irish businesses have just organised a truck convoy to deliver 600,000 litres of stock water plus 200,000 litres of bottled water to Armidale. While one could argue whether Armidale is the centre of greatest need, locals were very grateful. 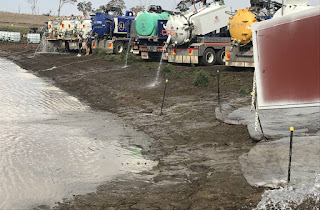 The Armidale city supply has been providing water for rural and stock needs as well as firefighting. The bulk water was unloaded in a dam near the airport for firefighting needs, while the bottled water was distributed around the district to meet local needs.

Armidale Regional Council has been drilling for ground water to provide emergency back-up.
One SMH story on Council’s plans to tap ground water suggested that Armidale was too high to have good ground water. This added to the trope about Armidale’s desperate water problems. Mmmmm!

It is true, I think, that height and geological fragmentation affect supply, but prior to the building of the Dumaresq Dam (1896-1898), Armidale relied on the combination of wells and rainwater tanks. As reticulated water spread, wells were filled in, but some remained in use for domestic or industrial purposes into the 1950s.

Independent of Council plans, Rosemary Johnson from the Historical Society has been mapping the previous distribution of wells and springs across the city. This led to an active discussion on the Armidale Families’ Facebook group where some 140 past wells or springs were quickly identified. 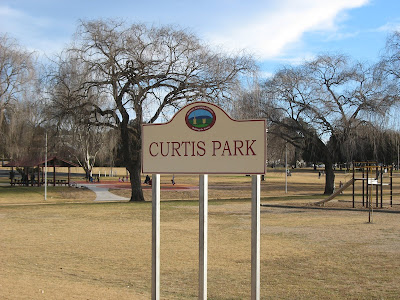 At a personal level, I have spent much of the last two days watching my neighbour over the back fence put in an apparently successful bore. It was quite distracting because of the kit involved and also the noise. I actually hadn’t seen a bore sunk before.

Council’s drilling for ground water has had sometimes unforeseen consequences.

The University of New England Archaeology Department has a new ground penetrating radar. This was to be tested on Curtis Park, part of the Creeklands that run through Armidale. Curtis Park was the site of the original bridge across Dumaresq Creek and of early buildings in colonial Armidale. The survey was to be done before construction of a new playground.

Chatting to friends, they said that the radar and the Council drill contractor arrived at the same time, with a bore put down in the middle of the survey site. The spoil from the bore hole included pieces of broken crockery and other historical material. Oops!

We have come to the point now with the fires that they are all on advice level.

Apparently there was some distress among the South Australian crews that they were not back in South Australia to fight the fires there. Some had been directly affected by those fires. I can understand that. 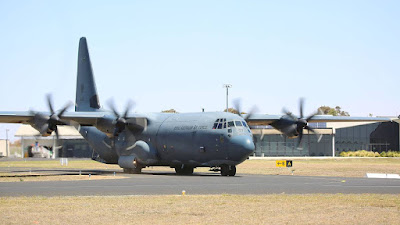 Fighting these fires has been a huge effort.

The Armidale regional airport was used as a hub for both RFS and contracted fixed-wing aircraft and helicopters flying around the clock as they fought fires from the Queensland border to Tamworth.

Between September 8 and November 17 there were 81 extra charter flights into the airport carrying firies in addition to those travelling on scheduled flights. Aircraft included a RAAF Hercules whose size mean that it had to park on the taxi way.

I couldn't finish this entry without mentioning another of those fire related human stupidity stories.

Bundarra is a small town to the west of Armidale. Friday last week a trio, two men and a woman, were allegedly driving at high speed through Bundarra.  Police gave chase, but were forced to stop when the car entered rough terrain. There is some pretty rough country around Bundarra.

The trio abandoned their car and then allegedly confronted two women on a nearby property at knife-point, stealing another knife, cash and a Toyota Prado, the later version of the Toyota LandCruiser. When the police spotted them, they took-off across country, smashing gates and fences and then crashing the vehicle which burst into flames.

The trio left the vehicle and fled on foot, with one allegedly lighting fires behind him to slow pursuit. One was captured in the pursuit, the other two were found two hours later sheltering in a dam from the bush fire they had created. The fire burnt out 1,400 hectares.

Thanks Jim paints a good picture for me. I have not lived in or visited Armidale for many year, but the picture is vivid.