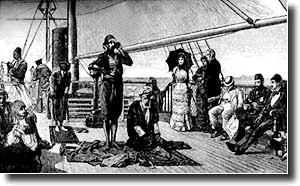 Illustration: Afghan camaleers at prayer while on their way to Australia, 1880s. See Wikpedia story on camels and camaleers.

In this, my third post, on migration matters, I want to extend my analysis by looking at migration and its impact through the prism set by my own experience. I doing so, I want to try to tease out further my two key themes:

As I write I am listening to radio reports of the absurd comments from the NSW Opposition Leader Peter Debnam on the information session held to assist Lebanese Australians evacuated to Australia during the recent war. This follows Federal Opposition Leader Kim Beasley's comment yesterday that he wanted migrants to sign a document expressing support for Australian values as a condition of visa grant. Both reflect a local political response to what are essentially overseas influences, both will be misinterpreted internationally.

I would therefore add a third theme, the need for us to be more aware of the ways in which things we say are fitted, squashed, into external models. I am reasonably sure, for example, that the 3 September Gulf Times (Qatar) article Muslim integration calls are not discrimination: Howard will be read in a context set by, among other things, the Muslim migration experience in Europe and the divides created by the War on Terror as evidence that Australia is a racist and anti Muslim country.

In my first article I referred to Don Aitkin's book What was it all for?, an examination of the changes that had taken place in Australia through the eyes of the Armidale High School Class Leaving Certificate class of 1953. I share many of the same experiences as Don, although I did the Leaving Certificate for the first time in 1961 (my parents made me repeat because they thought that at 16 I was too young to go to University). Even in that short period of eight years the change process was well underway.

I was born in Armidale in 1945 into a middle class academic family with town and country connections. My family came from the dominant anglo-celtic group within Australia's seven million people. My mother was a second generation Australian of Scottish ancestry, my father was a New Zealander (one of the eight per cent of the Australian population born in the UK or New Zealand) from North English stock who had come to Armidale in 1938 as one of the foundation academics at the newly established New England University College.

We were a political family. The Belshaws came from Wigan and were English working class. Grandfather Belshaw went into pit at twelve, Grandmother into mill at twelve, later migrating to New Zealand. Dad's personal politics can best be described as Fabian Labor in the tradition of Sydney and Beatrice Webb. However, he had married the daughter of David Drummond, a local Country Party member of first the NSW and then the Federal Parliament, got on well with his father in law and shared many of his regional development interests as well as his desire to improve education. This tempered his public involvements. For my part, I was very close to my grandfather and was involved with Country Party politics from a very early age.

The Australia I was born into is best thought of as another country. 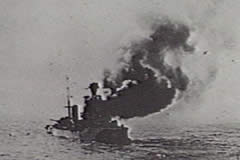 The Second World War in which almost a million Australian men and women served was still underway (Germany surrendered on 7 May 1945, Japan on 15 August). Photo: At sea off Crete in the Mediterranean 19 July 1940 Italian cruiser Bartolomeo Colleoni under attack by HMAS Sydney near Cape Spada AWM P01103.005.This was followed by the Korean and Malayan campaigns.

While Australia had turned to the US during the war in face of the Japanese threat, the symbols of Empire and Commonwealth were still omni-present. The map on the wall in my bedroom, the globe on the desk, still had large parts of the world coloured pink. The Royal family was a symbol of respect, not of celebrity.

This does not mean, however, that there was not a strong sense of Australian nationalism. There was. Australians saw themselves as very distinct, in part defining themselves in terms of their perceived differences from the United Kingdom and its population. Attitudes were also influenced by ethnicity and Christian denomination, with the attitudes of those of Roman Catholic and Irish ancestry (the Irish connection within the Australian Catholic Church was very strong) influenced by their attitudes to the troubles in Ireland.

Australia was also then a strongly Christian if sometimes irreverent country. This was reflected in the very fabric of life in terms of unconscious thought patterns, activities and political and social divides. The biggest divide in Australia was a sectarian one, between the Roman Catholics on one side, the Protestants and Anglicans on the other.

Intellectual life was necessarily more limited than today. In 1945 it was still possible to read every book published in Australia. This was partially a function of population size and wealth, partially a feature of a country that had experienced depression followed by war.

How can this be?

Today we are submerged in information about the rest of the world on a 24 hours, 7 days a week basis. A quarter of our population was born elsewhere. Australian troops are serving in multiple countries round the globe. Australians travel the world constantly on business. Almost a million Australians live outside the country. Yet access to information should not be confused with involvement. Consider this.

In 1945, almost 15 per cent of the population had had direct service involvement with the war, many on overseas service. Australian cities had been bombed by the Japanese. Almost a million US troops passed through Australia during the war, a huge number relative to the size of the Australian population.

Turn from this to other aspects of life. Here I am working on impressions so I stand to be corrected. But consider this for the immediate post war period.

The school curriculum was both less crowded and different. Subjects like history and geography occupied a much higher proportion of the curriculum. Within both, there was a strong British, European and Commonwealth/Empire focus. We learned more at school about the rest of the world and at greater depth than is the case today. There were far fewer academics, but a much higher proportion were from overseas or had trained overseas.

Excluding military service, a smaller proportion of the population travelled overseas. But those that did went for a much longer period given the long steamer journeys at each end. Migration rules, especially in the Commonwealth and Empire, were easier, so that many families such as my own were spread across Commonwealth countries. Australians could and did stand for election to the UK parliament, UK citizens could and did stand for election to Australian parliaments.

This was a very different world. As Australia got bigger and wealthier I think that it turned inwards, the local increased in importance relative to the rest of the world.

At the end of the Second World War the Australian people were, quite simply, scared.

There had long been deeply held fears that the small Australian European population on the edge of Asia would be swamped by Asian migration. The Second World war had given added force to these fears. Now the Australian Labor Government and its Immigration Minister Arthur Calwell (photo), Australia's first Immigration Minister, launched a mass migration program that became probably the largest voluntary migration program of the twentieth century.

The new program had bi-partisan political and public support from the beginning. This was a necessary pre-condition for success for what was, although this was not fully perceived at the time, a major exercise in social engineering.

The program was, in today's terms, unashamedly racist in that it was limited to people of European stock. However, while there was a strong focus on people from the traditional home countries in the British Isles, the new program covered every European country. This meant that anglo-celtic Australia was deliberately targeting people of different ethnic, cultural and language backgrounds, people whose very presence must alter the country they were coming too.

I wonder whether in today's world of focus groups and constant opinion polls such a program would even be possible. Australians are as prejudiced about outside groups as any other society. All the evidence is that many Australians of the late forties had prejudices against southern Europeans in particular. Today those prejudices would be picked up in the polls and spread across the newspapers, feeding back into popular opinion. In so doing, they would have negated one key feature of the Australian character, the capacity to distinguish between group and individual.

I am not sure that this feature is unique to Australians, but it is certainly strong among Australians. All politicians are crooks (a commonly expressed Australian view), but I know my local member and he's okay. In similar vein, I dislike Group x because they are - insert whatever phrases you like - but Fred from Group x is an okay bloke.

In saying this I am not saying that the new migrants did not experience individual discrimination, every new group coming into Australia has experienced this. What I am saying is that our overall capacity to treat individuals as individuals independent of attitudes towards the group those people come from was critical to the success of the migration program.

Assimilation was central to the immigration program.

Like the word gay, assimilation is a word that has changed its meaning, making it difficult to use today.

To test this, I asked my sixteen year old what she thought the word meant. She explained to me that the only use of the word she had heard from her teachers was in the context of approaches towards the aborigines where she was taught that the assimilation policy meant absorption into the dominant European culture. In this case, assimilation is equated to cultural destruction. I note from reading the overseas blogs that current use of the word outside Australia generally equates to this meaning.

Given this, I think it important to define how the word was used in the context of the immigration program. Our new migrants were expected to observe Australian laws, to fit into Australian society in a general sense, to help build a new country and to leave their home conflicts behind . This last was important given the recent War as well as European ethnic clashes in areas like the Balkans. They were also encouraged to learn English and were given a measure of support to do so. There was none of this high fallutin stuff like learning Australian values! We just did not take ourselves that seriously.

I will continue this story in the next post looking both at the overall picture and the on-ground experience as seen through my own eyes.

Very good posts. Currently writing lectures on this very topic. One of the more sensible contributions I read was Tony Abbott's article in Quadrant March 2006 (way above the usual level of Quadrant). This identifying Australian values is definitely high fallutin!

Thanks for this comment, Geoff. I really am very worried that the tone of the current debate will end up twisting things beyond repair.