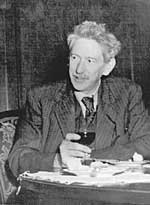 I was very pleased to find a story about Dr Murray on the Academy of Science web site (link above). The material in this post is largely drawn from that material.

I did not know whether to report on this on this site or on the New England Australia blog. I decided to put the story here because Dr Murray is part of the story I am presently writing, a symbol of the Australian world pre 1970. There is in fact a two way link, through Armidale and then through Canberra where Yarralumla, a Canberra suburb where I was to live for a period, carries the name of a Murray family property.

Born 0n 18 June, 1900, Dr Murray was a member of a distinguished family. His grandfather, Sir Terence Murray, was a pastoralist and politician and, for a time, President of the Legislative Council of New South Wales. His father, Sir Hubert Murray, was Lieutenant-Governor of Papua from 1908-1940, his cousin also Hubert Murray followed Sir Hubert as administrator in Papua, while Sir Gilbert Murray, was Regius Professor of Greek at Oxford University. Dr Murray had an elder brother who became a Brigadier-General in the British Army, and a sister, Mrs Mary Pinney

Dr Murray was born at Dorchester, England, where his mother had trekked from Australia with her two children while his father was serving in South Africa during the Boer War. In some ways his upbringing was typical of Anglo-Australian families in those days of Empire and Commonwealth, while his later career also typified the widespread nature of academic links.

1901 found Dr Murray aged one and just starting to walk, in Brussels with his mother, brother Terence, and sister Mary. The idea was for the children to learn French. From Brussels Dr Murray was taken back to England and after a period spent settling Terence into school, to Australia. The family then lived at various places in NSW, and finally at Manly, near Sydney. His sister remembers him from this time as a small, quite but determined child struggling gamely against the authority of a French governess. This was also the only time in which their father was with them for an extended period.

After a period living in Australia. Dr Murray, his mother and sister returned to England where brother Terrence was still living. He then attended St Johns College and later Beaumont College. However, in 1914 he was back in Australia at Riverview College, Sydney.

According to his sister, at 14 years old Dr Murray was definitely dedicated. While older boys were playing cricket, he would be discovered on hands and knees discoursing earnestly with ants, and all manner of strange beasts lived in his pockets. This aspect of his younger son's character was a disappointment to his father, whose tastes lay in the direction of sport, for which in his youth he collected a number of medals, and the Marquess of Queensberry's Cup for Amateur Boxing. But in spite of these contrary interests. his sister recalled that Dr Murray and his father were great friends and no influence was brought to bear on him to change his interests.

Dr Murray commenced his formal scientific education at the University of Sydney where he graduated with first class honours in botany and zoology in 1922. For this he gained the John Coutts Scholarship for distinction in science and a University Medal.

His distnguished scientific career from this point is covered in the link reference and I will just summarise. From Sydney he went to Oxford where completed a postgraduate Bachelor of Science degree in 1924. About this time Murray started his work on experimental embryology and published several papers in collaboration with J.S. Huxley.

From 1924 to 1929 Dr Murray worked in Sydney during which time he completed his DSc. In 1929 he was awarded a Rockefeller Fellowship and continued his research at the Universities of Freiburg and Cambridge. From 1930 to 1949 he worked in the UK at Cambridge and then in London, continuing pioneering work in the biological sciences, publishing a number of articles and two successful books.

In 1949 Dr Murray was appointed Challis Professor of Zoology at the University of Sydney. Professor Rogers, the author of the article, notes that this was a difficult time in all Australian universities. Undergraduate numbers, augmented by ex-servicemen, were increasing, expecially in the advanced classes. The universities were short of staff, equipment and laboratory space. Much of Dr Murray's time was taken up with administration, and his research work suffered. He also suffered a heart attack in 1957.

In 1960 he resigned his Chair and shortly afterwards took up the post of Reader in Zoology at the University of New England. He held this post until 1966 when he was appointed Research Fellow of the University. During this time Dr Murray took up his research work with renewed vigour and published a number of papers chiefly on experimental embryology.

I have already spoken of the University of New England during this period with its gowns, its sometimes formal but always active campus life. The University's rules then provided that all internal undergraduates must live in College in, from memory, for at least the first year. The only exception to this rule were local students who could live at home, but were also required to be affiliated with a college, in my case Wright College.

I met Dr Murray in 1963 because he was appointed my moral tutor. As I remember it, the genesis of the moral tutor system lay in Oxford and Cambridge at the time when women were first admitted. There were concerns about the potential pressures upon such a small group in a male environment, leading to the appointment of moral tutors.

At New England, the role of the moral tutor was to oversight the well being of a small group of college students. To this end, the group met with their tutor on a regular basis in the late afternoon, then went in a group with the tutor to formal dinner.

Dr Murray was a modest man in terms of his own achievements, although he did talk about his father and Papua. As an 18 year old, I had no idea that my moral tutor was a world class scientist, only a limited idea as to the range of things that he had done, the places he had seen. However, we all found him a kindly and interesting man. His tutorials were fun.

As I remember it, he explained that his wine collection was so large that he could not drink it all before he died. Our job was to help him! So at the start of the tutorial while he was finding out what we had done, whether we had any problems, he would offer us different sherries to try. Then we would carry wine to the dinner suitable for each course, returning after the dinner for port. In all this, I do not remember any students actually getting drunk.

This is Australia of 1963. Outside the Colombo plan students, New England drew most of its undergraduate students from across New England. In many cases this was the first family experience of a university education, the first time away from home. A lot of students had had no exposure at all to wine and its rituals. In retrospect, what Dr Murray was doing was introducing his group to the broader and more sophisticated life that he knew so well.

When I saw the photo above with Dr Murray holding his characteristic glass of red wine, it all came flooding back.

Dr Murray retired at the end of 1966 intending to return to Cambridge to pursue his research interests. He died at sea on 17 May 1967 soon after leaving Australia.
Posted by Jim Belshaw at 8:25 am