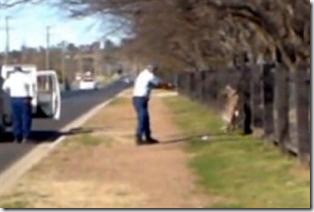 I had actually missed this story beyond vaguely noticing it. Then I found it front page in the Armidale Express.

Before going on, the heading in the Nine story reads Teens watch cop shoot kangaroo.

I need to set a location for you first. This is the main road out of Armidale to the east. The fence on the right is the front fence to my old school (TAS).

The facts appear to be this. A kangaroo was hit by a car. The accident was reported. Wires, the wild life service, asked police to put the animal down. It took three shots from the service pistol. TAS boys, one of whom had reported the incident, watched. One took some video that was then posted to Facebook. Someone else then took the video and posted it to My Tube.

All hell broke lose. Police incompetence. The need to save the kangaroo. Teen age boys exposed to this brutality. Their insensitivity in posting it. And so it goes. The police were in trouble. The boys were in trouble. The Express commented that it was another example of the growing divide between metro sensibilities and the reality of country (I would leave country out) life.

There was no time to get a humane killer if indeed it would have worked. You try applying a humane killer to a kangaroo with a broken leg. A few years ago before the gun law changes a .22 rifle would have been readily available. It was not, so the police had to rely on their inefficient (for these purposes) service revolvers. Boys are boys and watched while commenting. I doubt that this scarred them for life. Even today when TAS has many town students, a goodly number actually use firearms for sport, hunting and clearing vermin.

I really don't know. On my soapbox, I would talk about the growing unreality of many social attitudes. Leaving my soapbox aside, I just think that the apparent reported reactions are just dumb and to the extreme.

Hmm, Armidale plonkers can kill a human with their 'inefficient' service pistols', but not an injured kangaroo. No time to get a humane killer? There are at least 2 vet surgeries within a very short ambit of TAS. All the vets keep large animal euthanisers at hand. Having tormented and tortured the poor bloody thing to death, they could at least have picked up the body, rather than grabbing it by a leg and hurling it into the paddy waggon. Arseholes all.

I've been in a similar incident at about age 19, long before the gun law changes. But there were no vets or farmers near the Cotter River at 2 a.m. I think the cops were more scarred than I was. Poor buggers - those little guns couldn't penetrate the skull of a kangaroo.

It's actually more efficient to take one out with a length of 2 by 4, but imagine the screams arising from that.

Anonymous seems to have an axe to grind, judging from his(?) condemnation of what they did to the dead body. I don't think, despite his tone, that it was an occasion of fun and joy for them.

I suspect, Bob, that Anon may be influenced by local events including a recent tragic shooting. That said, he was very jaundiced.