Problem ownership and Indian students - it's time to draw the line

Problem ownership is one of the analytical techniques that I use in consulting. This technique has been especially developed by one of my Ndarala colleagues, Tim Russell, an international trainer and consultant.
The basic concept is a simple one. Faced with a problem, you need to ask two questions. Can I do anything about the problem? Should I do anything about the problem?

If you cannot do anything about the problem, then it is not your problem. You can only control your responses to it.

Some of Australia's politicians need to learn this.

In Death of Nitan Garg and the Indian connection I suggested that the Indian student issue was spinning out of control. I also said:


I think that we just have to accept that Australian Governments cannot guarantee the universal safety of any group, nor can we promise to do so.


To argue, as some Australian have done, that Australians are more at risk in India than Indians in Australia is a tit for tat argument that completely misses the point. This is actually an Australian domestic policy issue that needs to be dealt with here, independent of international reactions or issues. My key point here is that we cannot control Indian or international reactions, we can only control what we do or say.


Starting from this point, we have seen our politicians take ownership of this issue in quite inappropriate ways, attempting to control things that we cannot control. One side-effect has been the introduction in Victoria of police procedures that breach that State's Human Rights Charter. 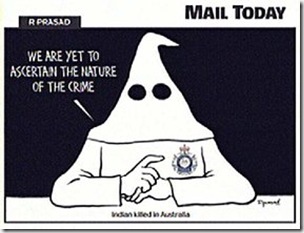 To extend this argument, consider this cartoon from today's Delhi Mail. The Victorian police are apparently outraged. Get real, fellows.

When I saw the cartoon I laughed. It's really quite risible, as are the suggestions that Australian racism is a reflection of our convict past! Over Christmas, my daughters learned that they actually have convict ancestry on their mother's side. This was quite a thrill!

We cannot control reactions in India, nor can we control the Indian media who are behaving just like the Australian media in similar circumstances. As indeed are some of the more extreme expressions of individual Indian opinion.

What can we control?

First, we can control our responses. We may not like it, but if we cannot do anything about it we just have to live with it.

Secondly, and I think this is very important, we need to think of and protect our own Indian community many of whom have been living in Australia for generations and are proudly Australian.  I wrote a little of this in Sunday Essay - for Ramana: India and Australia.

In  Moree's gain, Indian students and social change in Australia, changes in Australian higher education I quoted Paul Barratt's suggestion that the very publicity itself was having a copy-cat affect. I am frankly quite afraid that the growing reactions of some Australians to the whole affair will lead to damage to our whole Indian community.

Thirdly, we can deal with issues on the facts independent of views in India. Those views are irrelevant to the facts.

The death of Ranjodh Singh in Griffith appears to have little to do with anti-Indian feeling. There are almost 2,000 Indians living in Griffith, a relatively small inland NSW city, the first of whom arrived 30 years ago. They seem to be very well accepted. Mr Singh's death appears to be connected with purely local issues linked to labour contracting.

If it is established that specific ethnic or racial issues are involved in the attacks, then we deal with that as part of the Australian response.

At the moment, Indian media and Indian blogging responses are at least partially driving Australian responses to the detriment of both countries. It's time to stop.

The editor of the Mail Today newspaper, Bharat Bhushan, has apparently defended his decision to publish the controversial cartoon. Mr Bhushan has also defended the paper's cartoonist, R Prasad, who drew the piece in response to attacks on young Indian men in Melbourne. I quote:

"What he does is he exaggerates things," Mr Bhushan said.

"He forces people to look at a particular point of view, which we had thought in a mature society like Australia would lead to introspection, rather it has led to hysteria."


I have to agree, although Mr Bhushan then rather spoils things by reportedly adding


But Mr Bhushan says the anti-Australian sentiment will stop as soon as there is an end to violence against Indians in Australia.


"The day racist attacks stop, the day these criminals are brought to justice, you would not find any newspaper in India calling Australians racist," he said.


Now this is part of my point.

The first sentence is undeliverable. We cannot deliver because Indians, like all of us, are exposed to undercurrents in Australian society. The second point is also undeliverable.

This does not mean that we should not address issues. We should, but they have to be issues that we can do something about. This includes racist attacks.

Thanks, Neil, appreciated. I suddenly felt that I had to write something, but to try to put in a different way.