Just a bit of a round-up this morning on various blogs and blogging.

I have been enjoying maximos62's posts on revisiting Indonesia. I was struck by a number in his last post well captured in the title: #Indonesia has 11.76 million #Facebook users, #Twitter is Growing #CNN relies on Web2 Growth. 11.76 million? That's a big number.

As I read, I mused about the way that something like Facebook might play in encouraging cohesion and cross-links in a very diverse country, at least among that group able to access it. Another post, Some blatant errors in Australia’s ‘Howard Era’ Foreign Policy towards Indonesia, was interesting because of the way it looked at on-ground effects of the Howard Government's decision to reduce Radio Australia services.

Maximos' first cited post includes a discussion of the role of blogs and other new media in reporting versus the conventional media. Not much appears to be the short answer!   Legal Eagle looked at a linked issue in Bloggers, journalists and the law.

There seems no doubt that many bloggers simply replicate material from the mainstream media, sometimes without attribution and without any real value added. This, to my mind, is plain wrong. That said, the relationship between blogging and other new media and the conventional media is far more symbiotic than the conventional media sometimes allows.

The conventional media itself happily uses Twitter, social media sites such as Facebook and blogs as sources of information and not just on fast breaking events. Further, the new media also plays a role in directing traffic to specific stories and sites.

In writing in a blog environment I do not claim to be a reporter, although I do report.

Like all bloggers, I use the conventional media as a source of stories. Interestingly, I very rarely use the TV news services as an information source. Australia's ABC isn't bad, although when you drop to local or regional level the on-line stuff is so scant as to be almost useless from my perspective. CNN and BBC are far worse than the ABC. Al Jazeera's English language service sometimes has material that others miss, but the limited nature of coverage means that a weekly check of the site is generally all that is required.

To some degree, the print media itself has moved away from reporting into commentary. Here bloggers are at least as good and sometimes better.

To illustrate my point, take this post by Paul Barratt: ASC Board: changes ill-advised. The post is part reporting, part commentary. Paul is a former head of the Australian Defence Department. He writes from a particular perspective, but no-one can deny his expertise.

Another example can be seen in Will Owen's Noel Pearson's Hopes. Will, an American blogger who has been writing on Aboriginal issues and especially art for some time, is an informed observer.

Sometimes, though, I wish bloggers would provide more detail.

There is something of a constitutional crisis running in Canada at the present time following the decision of the Governor-General on the advice of the minority PM to prorogue Parliament until the new year. Christopher Moore, for example, posts on it here, here, here. Note the flattering references to Australia!

The problem for non-Canadians in interpreting these posts is absence of contextual knowledge. I have a reasonable knowledge on constitutional issues in general and within the Westminster system in particular. So I understand the difference between adjourn and prorogue.

For the benefit of those without this background, adjourn simply means that the Parliament sittings are suspended until a future date. All the business of that Parliamentary session continues in existence.

By contrast, prorogue means that that Parliament is actually terminated. Everything on the books at that point including legislation under consideration is relegated to history. When Parliament resumes, it is a new Parliament starting with a blank sheet so far as business is concerned.

Parliamentary adjournments are common. By contrast, proroguing Parliament happens when an election is called. The Canadian PM's move is most unusual and is actually the first technical step that would be required to create a dictatorship. You see, the existing Government continues in power until the new Parliament is formed.

The conventions dictate that that continuing Government should act in caretaker mode. However, and in the absence of the Governor General or President in a Republican Westminster model acting under what are called the reserve powers, there is no legal constraint on what the Government might do so long as formal Parliamentary approval is not required. So proroguing Parliament without an election is a most unusual  and potentially very dangerous step.

Oddly, or perhaps not given the way coincidences work, I was talking about these issues with a friend over lunch during the week.

Dennis Sligar and I worked together in the Commonwealth Public Service, then later as consultants and then later still in the the Royal Australian College of Ophthalmologists when I was CEO there, he Director of Education and Training. So we have known each other well for a very long time.

Over lunch I commented that the thirty year rule applying to release of Commonwealth Government records meant that some of the things that we had been involved in at senior level were nearing release date. He laughed, and said that he had already featured in the released Cabinet papers.

Going back in history, the first Fraser Liberal Country Party ministry was appointed by Governor-General, Sir John Kerr, in a caretaker role upon the dismissal of the third Whitlam ministry on 11 November 1975. It remained in place until a double dissolution election on 13 December 1975.

This was a very turbulent period. The crisis had been brought on by the refusal of the opposition to pass the budget in the Senate. Finally, in a decision that remains controversial to this day, the Governor General dismissed the Whitlam Government and commissioned the leader of the opposition as caretaker PM with the sole duty of passage of the budget and then the calling of an election.

Prior to the dismissal, Dennis had been on secondment to Education Minister Kim Beazley Sr as Principal Private Secretary and was still formally working for him. So he wrote to the Governor General in that role.

The Australian Cabinet papers are interesting because they do provide an insight into the working of caretaker Governments.

While I have the knowledge to interpret Christopher Moore's comments on the Canadian situation to some extent, I do not know enough about the Canadian constitution to properly understand the nuances attached to the things he has talked about.

This is an experiment to see if I can get an actual copy of the Cabinet Minute into the post: 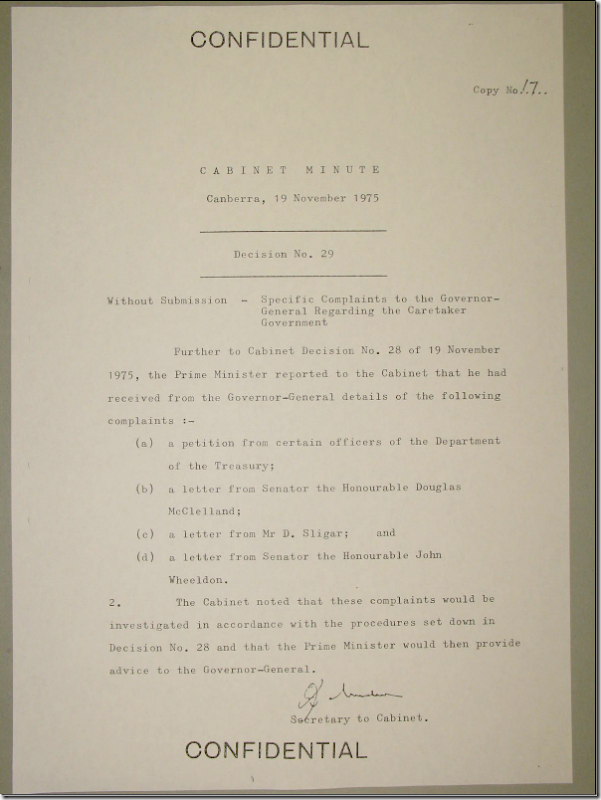 Being Canadian, your post hits a nerve. The majority of Canadians are unaware of what is transpiring under their very noses. I am ashamed to say that many of them are sheep, easily led by what parliament advises them.

Thanks, Barbara. I will have to try to learn more.

Jim, I'm glad that you're finding some of my current posts on Indonesia useful. I share the view that Indonesia is important. It's not merely important in a strategic sense either. We share a large and highly porous border with Indonesia, in a Bio-Geographic sense there are ancient links and continuities. There are also many possibilities for trade and cultural exchange. Perhaps some of the current negativity expressed about Indonesia, in Australia, might be easily dispelled if we're able to initiate more of this type of cooperation in the future.

Boggers like Niar (now a Facebook friend) and Tikno helped reignite my interest in Indonesia. It's partially a familiarity thing - getting to understand the other side. This is where I think blogs and bloggers can help.