I woke early this morning with a very bad cold and a fogged head. It's raining, and there are again floods in South East Queensland and Northern New South Wales.

I wonder where summer went this year? Our pool is clear and would be inviting if only it were warm.

Today is Australia Day. The hash tag #australianfacts started running early. The thread began with a suggestion by kedgie: "We should so troll the rest of the world with stereotypes about Australia tomorrow with #australianfacts."

A few random examples for you:

Today is also India Day. Last year we went to a lunch at an Indian friend's house that kind of combined them both.

Over at his place, our Indian blogging friend Ramana has been fulminating against Indian corruption. This cartoon comes from one of his posts.  I did laugh.

In Queensland, Premier Anna Bligh has announced a state election for 24 March. On all indications, the Labor Government is likely to be heavily defeated, continuing the Party's national decline. This election has a number of interesting features, so I will do a round-up at some point for the benefit of international readers.

In my last post, I referred to Winton Bates'  review of Robert Frank's new book. Now Winton has followed up with a second post, Should wasteful competition for positional goods be taken into account in tax policy?

I recognise that some of this can be pretty eye-glazing stuff for a non-economist. In any event, my thinking triggered by Winton's first post has been continuing in a different direction.

I found this (a quote from Winton) a useful point in clarifying my own thinking, the sometimes confusion I feel between my support for market forces as the best way of achieving results and the negative results flowing from relativist competition. This is a 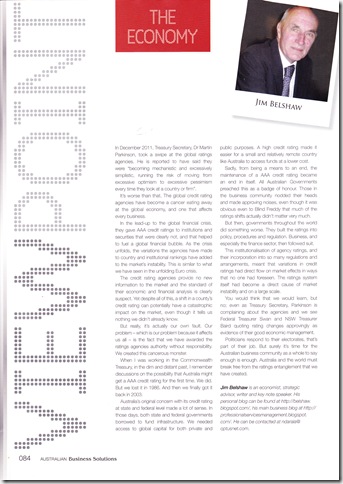 In an apparent digression, my first column has now appeared in  Australian Business Solutions Magazine.  It's quite pretty!

The column is on the impact of the ratings agencies. I will re-run it in another blog, for our Indonesian blogging friend Niar kindly wanted to actually read it!

The challenge I face in writing on the economy for a business audience is similar to the one I face in extending my response to Winton: how do I simplify so that my ideas are clear to a non-specialist?

This is especially difficult when my own thinking is just so clouded.

I see the negative aspects of the things that I am talking about every day.

We have also taken the concept of markets as a device for matching buyers and sellers and turned it into an overarching idea that markets are universally good.

In terms of the conceptual underpinnings to the the thoughts that I have, we start with the presence of externalities, something Winton has referred to.

In simple terms, an externality is a cost or benefit that occurs beyond, is not reflected in, an individual transaction or activity. Then we add to that the presence of multiple markets that interact and can conflict.

The broad amounts a CEO is paid is determined by the market for CEOs. This sets a boundary. The actual amount a CEO is paid depends in part on performance.

But what happens if there is a conflict between the firm and CEO market needs?  Here we need to introduce time.

At this stage I must pause. I will continue these thoughts in a later post.

Maybe its time to look for an Orbitz coupon and get away.
Posted by Jim Belshaw at 6:48 am

Jim, in something I have read recently (possibly Frank's book) the point is made that there has been a major shift in corporate culture in the last few decades with firms being much more willing to hire outside CEOs.
Why is it so? After all, a CEO recruited from inside the firm is likely to know much more about the firm, have greater loyalty and be less expensive to hire than an outsider. I think the answer to the question might shed light on the issue you are trying to grapple with.

I think Ross Gittins is a good model for how to write on economics.

You raise an interesting point, Winton. I have a rough mud map in my mind as to when and why that change took place. It's part of the broader changes that came to a head during the eighties with their focus on market models.

Jim, my impression is that outside CEOs are hired because they have no ties to people within the firm and no pet projects to look after. Boards had the impression - correct in many instances - that culture within their firms was serving the interests of the staff rather than owners.

That's true, Winton. But did it actually work?

It worked in some firms and not in than others. Is it possible to predict when the strategy is least likely to work?

I suspect that it is, Winton, although I am still thinking this through. I am presently writing a post on the tent embassy imbroglio, but will pick this issue up tomorrow.

Thanks for the mention Jim. I hope that you caught that description of me in http://rummuser.com/?p=7363

“Ramana is opinionated about politics, sentimental about family, and pragmatic about the direction his life has taken.”

Doesn't the description ring a bell?

Yes, Ramana, it could apply to me as well!

Jim, I have followed up Evan's comment with a review of Ross Gittin's latest book on my blog.