Back on 10 February 2008, Birthday shopping with my girls - moleskins and double pocketed shirts recorded a Dad's pleasure at being taken shopping by his daughters. The post began:

Now anybody who reads this blog will know that I am a tad, some would say a lot more than a tad, old fashioned.

In buying clothes, I am very cautious about ever buying anything in high fashion. Instead, I go for a more conservative cut because experience has shown me that this is more likely to be long-term wearable.

For a number of reasons I have bought very little new clothing in recent years, no more than a few pairs of socks or some undies. So my wardrobe is in an absolutely parlous condition.

This year for my birthday my daughters took me clothes shopping. This was a major event in its own right because they were paying! But it was also a chance to start filling some gaps.

My first targets were some double pocketed shirts plus some moleskins. 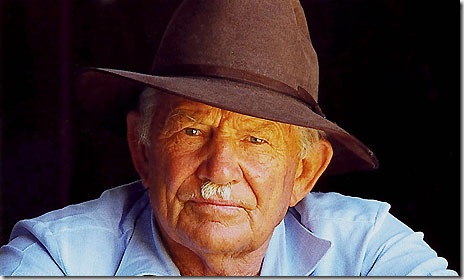 From this point the post went on to talk a little about the story of moleskins, country style and the Australian bush outfitter R M Williams.

Reginald Murray Williams was born on 24 May 1908. You will find a little of his life if you click on his name. It's quintessentially representative of one stream in Australian life.

Williams sold the the company he founded in 1988, but it went into receivership in 1993 and was then purchased by a then partnership of Kerry Stokes and Ken Cowley. Ken Cowley is better known as a former senior associate of Rupert Murdoch's. Mr Cowley, a close friend of Mr Williams, has preserved the firm' integrity. However, Mr Cowley has begun to exit for, as I understand it, family reasons.

On 15 April 2013, R M Williams announced that a 49.9 per cent share had been sold to L Capital Asia, a private equity fund sponsored by French luxury giant LVMH Group, in a deal believed to be worth about $A53 million. The intent is to extend the global reach of the R M Williams' brand.

It's interesting, but after all these the Australian country style remains the most distinctive Australian fashion trait even if, as I suspect, most of the customers now live in urban areas!