Fire, Fireworks and Wild Weather - the year ends in Australia 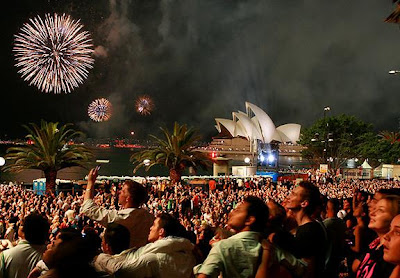 In Sydney, 2008 ended with the usual fireworks. This photo from The Sydney Morning Herald shows revellers watching from the Rocks area.

It is a great show, especially in fine weather like last night. We went once when the kids were young, sitting on a blanket to watch from one of the city parks near the water. But the crowds are now enormous, the Herald estimated 1.5 million people. This means that you have to get there very early to get a good spot, while the sheer number of people can be oppressive. Still, it is a great party. International readers will get a feel for it from the SMH story.

Further south in Melbourne and Adelaide people celebrated despite the oppressive heat. This was Adelaide's hottest December night in 110 years. It was hot too in WA, but there the celebrations were muted by tragedy.

“Then the fire jumped the road and we were stuck. I tried to turn back but was told I couldn’t, a gentleman in front of me drove for me and I proceeded to have an anxiety attack.” Bush Fire suvivor reported in the West Australian. 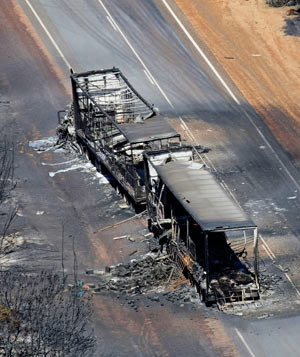 The story is a simple one.

A major bush fire broke out near the Great Eastern Highway linking Perth and the gold mining town of Kalgoorlie. At 8pm on Sunday 30 December, authorities decided to lift a road block as the fire – which had already burned thousands of hectares of Borrabbin National Park - was believed to be under control. A weather change was not forecast to arrive until 9pm.

The result was tragedy as a group of trucks was caught by the fire. Three people died. Details can be found here, here, here.

As always, Australia is a land of contrasts.

A major low pressure area meant heavy rain, strong wind and wild seas in Southern Queensland and northern New England. Nearly 46,000 homes were without power at some point over the weekend.

Photo:Talitha and Dion Grobbelaar, Courier Mail, surfers trying to get out to sea in the face of the waves.

Some of the surf photos are quite spectacular, with the big seas stretching far south, closing all of Sydney's ocean beaches.

The tragedy of trucks getting caught in bushfire seems to overshadow the real issue which is an over dependence on weather forecasts. The fact is that weather forecasts at the best of times are no better than reading tea leaves and people should realize that the weather bureau is only effective in telling us what the weather WAS and not what it will be.

Coincidentally, Lexcen, 1 January turned out to be the 100th anniversary of the establishment of the Bureau of Met.

While I think that I agree with you re the over-dependence on weather forecasts, they are only forecasts, I think that you are a little harsh re tea leaves. Met actually does a pretty good job.