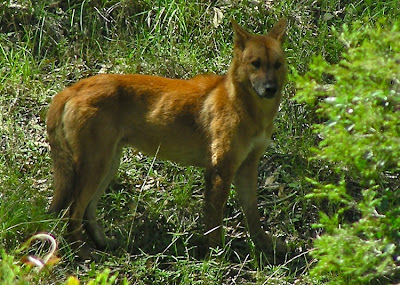 For those who do not know the Dingo, it is Australia's wild dog.

I had not expected to find a personal connection in the Wikipedia story about the Dingo. However, one of the archaeological sites used to date the arrival of the animal in Australia is the Wombah midden in the Clarence Valley. This is actually a dig I went on.

Having just finished my post on Why I am not a conservative revisited - and now Saturday Morning musings I was going to let things rest there. But I could not resist a short tour of my immediate blogging world.

Lexcen, do not misread my last post. I am as opposed to unthinking application of all forms of PC as you.

During the week visitor 23,000 arrived on this blog. I missed him/her completely. Ah well.

Also during the week, Legal Eagle invited me to become her friend on face book. Quite a thrill really. I see that LE hates clowns. I do not share this phobia, although I see her point.

Oddly, I had to go out to buy some stuff. There was a very good clown at the shopping centre really entertaining the kids.

My thanks to AV for his latest post. Neil also picked the discussion up in An outbreak of civilised discussion. I wasn't quite so civilised in a response to a comment from jpw2040 on the on-line opinion post. He wrote in part:

I’m not an expert on what is or isn’t a conservative, though I suspect that Neil might have nailed it. Personally, I find it remarkable that you can call him an old friend while supporting a situation in which he is treated as a citizen second class. However that’s your business, and his.

Now this actually got under my skin because of the reference to Neil. I don't think that my reply was rude, but jpw2040 deserved a fuller explanation, one that would have encouraged discussion.

Staying with Neil for the moment, he had a post generated by the latest sad case of a person dieing alone at home and then not being found for a considerable time. Mike Allen, Director General of NSW Housing, has released an open letter discussing the Department's approach in trying to keep in touch with its 50,000 over sixty tenants.

Still no new post from Blonde Canadian - I begin to fear that we have lost her to her new job.

I really enjoyed Marcellous's Riding westwards - loved the photos. Can I pinch to illustrate stories, M? There was a sort of Thomas flavour at points.

Speaking of Thomas, he kindly explained the mystery of US Democrat Party super delegates.

After a short break, Clare has resumed posting on her new blog, Life post HSC. During the week we learned that she had been accepted into the Ancient History degree at Macquarie, so that's good too.

I suppose that I am biased. I also know some of the people she refers to.

If you look at Insane -Please we do this every day! (and can overcome the paragraph breaks) you will see the true story of how a group of girls that could have been lonely misfits came to be welded into a regular cohesive group with a recognised position and considerable influence in part because of their very eccentricity and unwillingness to conform.

I fear that I am going to have to cook lunch. So, with my tour really just begun, I will finish.

PS - a message from Clare

If you do visit, please do leave a comment!

You are welcome to use the pictures as you choose, Jim.

...Mike Allen, Director General of NSW Housing, has released an open letter discussing the Department's approach in trying to keep in touch with its 50,000 over sixty tenants. If you look at the report I quote on my post, you will note that despite their being highlighted in the media, "only 22 of almost 600 had died in Housing Department flats over those two years."

Sorry, Neil, I was writing in a hurry and should have been a little clearer. Yes, I did see the reference to 22 out of almost 600. I thought that Mike's open letter was a useful overall contribution to the discussion.

NO SUCH THING AS A GOOD CLOWN! Seriously. I can't possibly comprehend it.

LE, I fear that I woll have to take you on a clown tour!