Saturday Morning Musings - Aboriginal blogs, more on "The Daily Telegraph Test" and the need for simplification 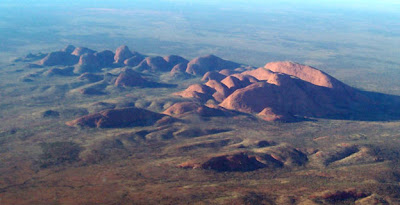 As presently mentioned on the side bar, Will Owen's Aboriginal Art & Culture: an American Eye has been running some absolutely stunning photos of Northern Australia and its Aboriginal art and artists.

Will's latest post, Art Centres and the Business of Blogging, referred in part to Aboriginal arts blogs in Northern Australia. I will write something on these, but in the meantime in response to a challenge from Will I have done a post on simple blogging tips.

By the way, Will, I took the liberty of showing your blog to daughter Clare, thinking that some of your photos might generate story ideas. She thought that the photos were great, but might not take up my gentle prodding. Life is just too busy, I suspect, even for the discipline of interesting blogging.

Still on Clare, you may find Clare's post Wild Thang! - schoolies stories interesting. After my recent excursion into inedible teachers, Clare clearly gets her spelling from me.

What do I say about the story? Clare did warn me that I might not want to read it. But I did laugh!

My post on The evils of "The Daily Telegraph Test" led one of the David's, Kangaroo Valley I think, to chide me in a comment. He wrote:

Jim, leaving aside your delicious mis-choice of word, I would like to make a comment on your conclusion: "I would simply note that Telegraph readers are not going to subject the piece to critical analysis".

This strikes me as an elitist view of a fairly large proportion of the NSW population based on circulation figures? This is not your usual thoughtful stance.

Ninglun said the story is stupid but damaging. I agree - but on the other hand, it sold papers, and probably won't be remembered beyond the next large headline.

I always understood that the prime role of a newspaper editor was to make a profit, and that this is achieved largely by maintaining or increasing circulation and, hence, advertising support. Questions of truth, fairness, and accuracy are buried way down in the mission statement - if considered at all.

More to the point, I would be very interested to see the generalisations that you would attach to the other main newspapers in NSW.

And how you would support your opinion (as you more usually do) - as opposed to just baldly stating it.

One of the problems I have been discussing on this blog is what I see as a decline in the effectiveness of public policy and administration.

This, I have suggested, is partially a function of the growing complexity of public administration. In complex systems of all types it becomes harder to see relationships across the whole system, so that actions in one area flow across in often unseen and unexpected ways into other areas.

I have also suggested that the problem lies in part in the wholesale application of particular approaches such as our obsession with standards, quantification and measurement, leading to a cascade of performance objectives and performance indicators of such scale and complexity that no one can follow them or see the relationships.

All this is further complicated by the tendency of all Governments to respond in an ad hoc fashion, introducing measures in response to particular pressures that either cannot be achieved or are, in fact, counter productive.

To my mind, the media plays a particular role here because of the pressures it creates by focusing on narrow specifics.

I have written a number of posts attempting to show how interaction across the media (all forms) can create what amounts to a fire storm, a feeding frenzy, that prevents rational discussion.

The fact that there is such a phrase as "the Daily Telegraph Test" within the NSW public sector is an example of what I mean.

Of course public servants should be concerned about questions of ethics and probity. Inevitably, they have to take into account in their advice possible media responses. But, I would suggest, when a phrase like "the Daily Telegraph Test" comes into usage, we have a problem at political and administrative levels.

The point of my post was to show how this works in practice.

As David said, the Telegraph story is stupid and damaging. As he also said, media businesses are just that, businesses. But the practical effect of the story could well be further restrictions on the employment of public servants with any form of criminal conviction or even criminal charge.

Now that may or may not be a good thing. But if it were to happen, it would be happening for the wrong reasons.

My comment on Daily Telegraph readers was not a comment on Tele readers as compared to, say, Sydney Morning Herald readers. The same argument applies.

Newspaper readers do not have the time nor, in some cases, the skill to deconstruct newspaper arguments.

More broadly, I would argue that few Australians - and that includes politicians and public servants - have the capacity to really understand or comment on the general workings of Government simply because the system has become so complex. They can only focus on specifics - specific cases, specific actions, specific proposals.

I gave health as an example in a previous post. Here the system is riven with complexities and conflicts of interest.

Worried about Medicare costs and the potential for over-servicing, Minister Wooldridge cuts back on the number of doctors in training, increases the hoops doctors have to go through to get a Medicare certificate. Ten years later we have a major shortage of doctors.

And so it goes on.

To my mind, the simple solution put forward of greater central control is unlikely to have much impact. I think that a much more fundamental simplification is required if our current system is not to choke on its own overloads and complexities.