A message for our overseas (and Australian) blogging friends 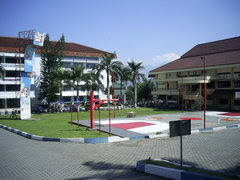 Jember (also Djember) is a city in eastern Java with a population of around 299,000.

This is the city Niar comes from, the city she has just left to travel to Jakarta. I am guessing, I do not know, that she studied at Muhammadiyah Jember University. I can understand how she felt when she left home.

In similar vein, Tikno's story Flood In Samarinda City suddenly told us where he was and gave us a picture of his life.

I write a lot, perhaps too much, on very specific personal issues. I suspect that I get the worst of both worlds: serious and sometimes very local.

However, I do try to to explain things so that they will be understood by others from different worlds.

I don't want to make this post too complicated. All I really want to say is that the best conversations, and blogging is just that, mix the personal with the serious.

I obviously believe that there is a place in blogging for long - some times very long! - pieces. But isn't it nice sometimes to learn about people as people? And I find that I do learn from those pieces.

In a comment from Niar, she said that she actually went to the University of Jember. I did not know that there were two universities in Jember. 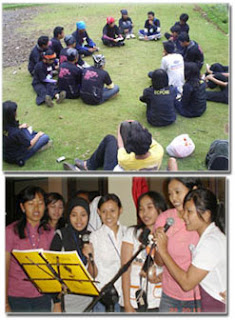 Both are located in university cities in rural areas.

UNE was established in part to serve its regional area, UNEJ provides services the agricultural areas of East Java. I quote from the welcome from the University's Rector, Dr. Tarcisius Sutikto:

About 45% of Indonesian labors are engaged as farmer who cultivate approximately 31 millions ha area, and East Java Province, where University of Jember (UNEJ) located, contributes more than 40% of the national agriculture products . Therefore UNEJ has vision to become an outstanding university in developing science and technology for sustainable agro-industry.

UNEJ is also focusing on the market needs for its course and research as well as the community development program, by offering more than fifty study programs. They cover various range of the most sciences including basic sciences and applied sciences. You will find most likely a study program that suits you!

UNE helped pioneer the study of Agricultural Economics in Australia, its Rural Science Department provided a range of research based services in conjunction with local research institutions, its university extension services carried adult education to a wide range of country communities.

Both universities emphasise the vibrancy of student life, something sadly lacking now in our huge metro universities. Both emphasise the welcome international students will receive from the local community. Both point to attractions in the surrounding country.

There are, I suspect, other similarities too.

Just as I left Armidale to work in Canberra after graduation, so Niar went to Jakarta. Australians who study at the big metro universities often, nearly always in the bigger metro cities, stay in the city after graduation. This is one of the reasons why Australia's regional areas have such great difficulty in attracting professionals.

If you go to UNE, then you will almost certainly leave Armidale to pursue your career. I suspect that the same is true of UNEJ and Jember.

I have really enjoyed my short tour of Jember and UNEJ.

It will be good when they get the Surabaya-Jember and Denpasar-Jember domestic fllights operating. At present, the connection appears to be by road. But then, too, the main connection to Armidale was by road or rail - the long trains packed with school and university students that used to mark the start and end of term are now a thing of the past.

I wonder whether UNEJ has considered its Australian marketing? Possibly not.

You see, that future plane connection from Denpasar turns Jember from a remote Indonesian destination into a short domestic hop away from the part of Indonesia that Australian already know best. Study at UNEJ whether short course or long and have a break in Bali on the way back. It sounds attractive to me!

PS. Like UNE does in English for its overseas students, UNEJ offers Indonesian language bridging courses.

Thank you for make a short review about UNEJ. Actually Jember not only has 2 Universities, but many. UNEJ is one of national universities in Indonesia, and the others is private Universities, like Muhamadiyah University. It is right that the agricultural faculty is the best faculty than others in UNEJ, and perhaps it has a similarity with UNE in Australia.

I had no idea. When I started I thought that Jember had one uni, then I found two, now I find multiple.

Dear Jim,
I am so surprise you've put a pict of one of university in my hometown. But, actually it is not a university wher I studied. I studied at University of Jember.
It is somethings beneficial that we can get from blogging, can recognise and understand the life of other people which different from our own from every words they wrote on their posting.
making new posting sometimes quite difficult by both how we can put our personal interest and something that everybody really want to read. And mix personal with serious is a better way to get the effective posting for our blog...

I could not have put it better Jim. Great sentiments which I heartily reciprocate.

I am glad that blogging has brought you into my life.

Hi both and thanks. You will see from the update on the post, Niar, that your correction as to UNEJ led me into an enjoyable journey of discovery!

You are right, I am also interested to know who the person behind the posting that I read, although a little about their live.

From you, I read your posts with the label "Belshaw Family".
From Neil, I read his post with the title "About the Whitfields".
From Rummuser: "The Tuckloo Club" (but I could not see his photo after he got problem with his blog).
From Niar: "Graduation (Part 2)."

I feels a special sense to all of you through the blogging activity.

dear Jim..
thank you for make a short review bout UNEJ. Actually Jember not only has 2 Universities, but many. UNEJ is one of national universities in Indonesia, and the others is private Universities, like Muhamadiyah University. It is right that the agricultural facultynis the best faculty than others in UNEJ, and perhaps it has a similarity with UNE in Australia.
the trend to leave hometown after graduation to the metro city is really bring into effect to the development of town it self. Many regional area difficult to developt and plan it development because lack of good human reseources. But sometimes it is a difficult choice where we have to choose to get a bigger opportunity than stay in our hometown that lack of good employment.
Jember has a air field now. Although it is not too commercial but many of people using this to easier their trip. Enjoy your short tour and blogging time, sometimes i also like you, getting beneficial of this blog by knowing everything out there...

Tikno, we must ask Ramana what happened to the photo of the Tuckloo Club. Like you, I noticed that it was no longer appearing. I actually wanted to use it to illustrate a story.I must also recheck the Belshaw tag - I don't think that I have used it recently.

Niar, thank you too. I will add a little further information to the main post to bring out the multiple universities.

I also plan to write more on the broader regional problem - it is common to most countries.