Sunday Snippets - cultural differences between Indonesia and Australia, the wonders of Sydney tribalism

A short post to record some of the things that I discovered while browsing.

In April 2008 Andress Hamenda, a postgraduate student from Indonesia completing a Master of Commerce program at the Australian National University in Canberra, started a blog called Dealing with Culture Shock. Andress described his blog this way:

This blog is created mainly to help international students who study in Australia to deal with culture shock.

The blog did not last long - only 15 posts over a few months. That's a real pity. The blog is worth a browse.

See, for example, a Comparison between Australian and Indonesian Cultures. This was slightly qualified in the next post, Exploring Indonesian Cultures, to make the point that Indonesia had many cultures; the first post had a Javanese perspective.

His last post, Saying Thanks, draws out beautifully some of the cultural nuances that can lead people astray.

Australians are generally fairly informal, straightforward and direct. They can sometimes seem rude to people from other more formal cultures. Yet saying thanks shows an example where there is a very special formality in the Australian culture. If you breach this one, Australians will think you rude.

Culture Matters is a blog I found through Neil's Google Reader series. This one is relevant to the series I began with Culture, Groups and Public Policy - 1 because it is an Australian anthropology blog. Many of the posts are what we might loosely call house keeping; calls for conference papers is an example. However, those with an interest in cultures are likely to find it interesting.

Finally, and still under the influence of Neil's Google Reader, one interesting thing about the somewhat eclectic collection of blogs that Neil has chosen is the way they illustrate different aspects of Sydney life.

I have written a number of posts over time pointing to the complexity and variety of Australian life, including the variety in Sydney itself, as well as comparisons between life in Sydney and life elsewhere.

As I have said before, Sydney's growing tribalism is quite remarkable, especially to an outsider like myself, someone who has known the city well over many years but has never belonged to it. While I have written about this, I have been wondering whether I can bring this to life in some way. 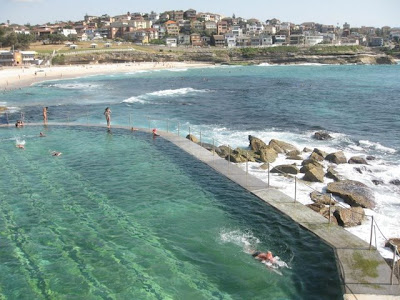 Take, as an example, this photo from Sydney Daily Photo of Bronte Beach and the sea baths on a hot Sydney heatwave Friday.

This is not the best shot I could have chosen. I have deliberately selected it because it shows the sweep across the baths to the beach beyond. It's quite a pretty shot, but it does not tell you much.

It does not tell you, for example, that this is claimed to be Sydney's second most dangerous beach.

It does not tell you that this beach is a centre for one of Sydney's most pronounced tribal cultures, the one my wife and her family most identify with.

It says nothing about the varying life styles that centre on that beach, nor the clashes that can arise. Not physical clashes I hasten to add, but clashes between residents and visitors, clashes over development, clashes over access.

You are either a Bronte Beach person or you are not. I am not.

Bronte Beach regulars know each other. On a Saturday morning, the elderly French boule players sometimes keep my mother-in-law's favourite beach shed free for her if she is late because they know that she always comes. I rarely see much of my wife on Saturdays during the day because she is off to Bronte.

This is a completely different world from that of the nearby inner suburbs such as Surry Hills that Neil so often writes about or photographs.

I sometimes think that the only thing that really unites Sydney people is their love for their city and dislike of Melbourne! Otherwise, the thing that stands out to me as an outsider are the differences.

But how to bring some of this alive to outside readers is, I find, a fascinating challenge.

Enough for the moment. I will finish my group series tomorrow.