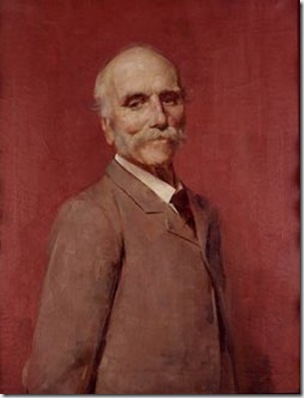 This is the story of the rise of the Ogilvies, one of New England's great squatting dynasties. It is a very good book that brings people and events alive. It helps in reading to have some knowledge of history, but the book does not require this, nor does it require a detailed knowledge of Australia.

Consider this. It is Sydney 1824. The family has just arrived.

The book was first published in 1973. George Farwell was then 62. Three years later he was dead.

Born in Bath (England) on 3 October 1911, Farwell arrived in Australia in 1935. A professional writer, Farwell was one of those interesting and peripatetic writers who managed to make a living in that past Australia when markets were so much smaller, literary grants unknown. Still, at the end of his career, Squatter's Castle itself was written on a literary grant!

This book may not be counted as history in a formal sense, although it includes some footnotes. Rather, it is a literary work written by a craftsman who wished to entertain. It is all the better for that. That said, it creates a real challenge for someone like me.

At one level I wish to quote him. His description of the frontier war in the Upper Hunter in 1826 is, I think, the best such description I have read. He brings it alive. However, it is hard to quote him as a source in a professional history book when I cannot check his sources.

At a second level, the standard of his writing is a challenge in itself because it sets yet another standard to be met.

For a ten year old boy the sight was a traumatic one. Edward was to remember it all his life. A row of gibbets emerged from the drizzle as their launch passed down the Thames. Three shapeless figures there in chains on that raw late autumn morning, vanishing into the mist again. Thirteen weeks later, anchoring in Sydney Cove, the ship swung close to another gibbet; on Pinchgut Island, a few cable lengths away.

Farwell uses the voyage as a device to mark the distinction between an old and new land.

The Ogilvies - William, his wife Mary and their four children - sailed on the 400 ton convict barque Granada sent from London to bring eighty one female convicts to their new prison in Australia. There were nine other passengers.

To Mary and the children, ship life was a very different experience. To William Ogilvie, it was familiar. He knew this world well; he had joined the Royal Navy at the age of twelve, retiring from active service at the age of thirty two. The ship's Scottish commander, Alex Anderson, was a highly competent captain. The ship's surgeon who doubled as convict superintendent was another Scot, Peter Cunningham.

This was Cunningham's fourth voyage to New South Wales. He was an intelligent man with wide interests. His later book, Two Years in New South Wales, became an English best seller upon its publication in 1827 and remains the fullest contemporary account of life in the new colony during the period.

Cunningham's sense of irony made him an acute observer of the evolving and complicated nuances of social life in New South Wales; Sterling (English born) vs Currency (locally born); the Legitimates also known as Crossbreds who had come to Australia by force of law vs the Illegitimates, those who had come to the colony of their own free will; the Merinos whose blood was worthy of a stud book.  Each part of colonial society had its own structures, each applied a sometimes sardonic assessment to others. The result, Cunningham suggested, was a series of subtle grades as rigid as the castes of India.

Cunningham and the Ogilvies became friends, a friendship that was to last throughout Cunningham's life. His knowledge of the local scene was invaluable to the Ogilvies. He and William agreed to look for land together.

The land they chose lay in what is now the Upper Hunter. William called his place Merton after the village in England where Lord Nelson had built a house for his mistress to the scandal of English society and where the Ogilvies had lived just prior to their departure for New South Wales. To William with his naval background, Nelson was simply a great man.

At the time William took up his grant, he was undercapitalised. The grant itself, 2,000 acres (800 ha) was too small to be properly viable. Economic survival was a battle, one that many lost. As stock numbers built up, the family occupied new land beyond the grant, thus becoming squatters.

Stock and the management of stock was central. Land was cropped for grains and stock feed and gardens planted; this was both a Government requirement and a necessity to meet immediate needs. However, transport costs meant that there was little market for produce. Horses, cattle and especially sheep with their high value wool were the source of income.

Stock was in short supply. When Peter Cunningham and William Ogilvie arrived at King's Town (now Newcastle) on the Lord Liverpool's weekly service from Sydney, they found that there were no horses available. They walked from there to the Upper Hunter, walked around the area they saw as especially interesting, walked back to King's Town.

Everything revolved around stock. Sheep were purchased with a deposit, the balance to be paid with interest from the wool clip. Money was borrowed at high interest rates to buy stock. Managers were paid in part in stock. The cost of any lost sheep was automatically deducted from shepherd's wages. A careless shepherd could be brought before the bench and sentenced to flogging. Herds were carefully managed for future increase.

The Aborigines had a different view. The flocks and herds of the settlers were on their land. To them, they were another source of food. Two different perspectives that help explain frontier violence. The Aborigines speared stock for food, the settlers responded with sometimes violence to protect their livelihood. As the Aborigines came to comprehend this, stock were speared as conscious retaliation, economic warfare.

We can see a little more of this complex evolving mosaic if we look through the eyes of young Edward Ogilvie.

The ten year old Edward who travelled down the Thames past the bodies on the gibbet knew the quiet tenant farming world of Merton. Now he was thrust into the world of the convict ship, then the strange new world of colonial Sydney. Once the family moved to Merton, the world changed again. Now it was the battle to build a new life in an isolated world far removed from anything the family had known.

It seems clear that the children were involved in property work from an early age. There was no formal schooling. They were taught especially by Mary Ogilvie.

Edward was twelve when the frontier was broke out. He was home when a large party of armed blacks threatened the house. Mary Ogilvie was alone. The stories as to what happened vary. What is clear is that she persuaded the blacks to leave. What is also clear is that she was able to do so because the Ogilvie's had treated the local Aborigines well.

This is actually a pattern across colonial New England, one that fits with Aboriginal cultural structures. The Aborigines were selective. In retaliating against Europeans, they generally targeted those who had been insensitive and brutal. Young Edward himself had played with the local Aboriginal children and had learned to speak the local language.

Childhood was short in this world. The children all took on adult responsibilities at an early age. The boys had to learn to manage a largely convict workforce, one that was changing because the convicts sent to New South Wales were changing. There were more serious criminals, fewer petty offenders. At eighteen Edward reported a life for shirking his duties. The sentence was fifty lashes.

In 1840 Edward with brother Frederick was in the New England, the Northern Tablelands, looking for new land. The escaped convict Richard Craig had discovered a huge river, now called the Clarence, while living with the Aborigines.

Pardoned for the discovery, Craig was now taking a massive party from Falconer's Plains near Guyra on the Tablelands down to the Clarence following the seasonal routes he had learned while living with the Bundjalung.

The huge column moved out in order. First came Dr Dobie's cattle destined for Ramornie. The Mylne Brothers' cattle for Eatonsville followed. Dr Dobie's sheep came next, then drays, horses and a further flock of sheep. There were no roads. Craig's job was to get the column through to the Clarence down what had become known as Craig's Line though some of the most rugged country in New England. The resulting journey is an epic in its own right.

Edward and Frederick Ogilvie asked to join Craig's party. Denied, they pushed on as fast as possible with an Aboriginal and reached the Clarence at Tabulum ahead of Craig. Downstream Edward took up fifty-six miles (90 km) on both sides of the river and later named the runs Yulgilbar. By 1850 Yulgilbar was about 300 sq. miles (777 km²) and included Fairfield, a 100,000-acre (40,469 ha) cattle station in the mountains.

Not unexpectedly, there were again troubles with the local Aborigines. Edward quickly became fluent in the local dialect and at a parley explained that he only wanted the grass and gave them complete hunting rights on his run including honey.

With success, Edward's direction changed. Father William had fallen in love with what is now Italy, something replicated by modern Australians. Edward did the same.

In August 1854 Edward Ogilvie sailed for Europe. For two years he travelled widely. His Diary of Travels in Three Quarters of the Globe, published in London in 1856 under the pseudonym "An Australian Squatter",  describes his visits to the war front in the Crimea and his enchantment with Florence where he had his portrait painted by Pietro Milani shortly before his return to Australia.

In 1858 while in Europe Edward married Theodosia, daughter of the Reverend William de Burgh. He returned with his wife in 1859, now building what was to become known as Yulgilbar Castle.

I will leave the story at this point. I hope that I have interested you in the Ogilvies as a small part of New England's history.