Because of the move I have not been able to keep up with all the interesting material round in the immediate slice of the blogosphere that I follow. So this morning I have spent a little time just catching up. 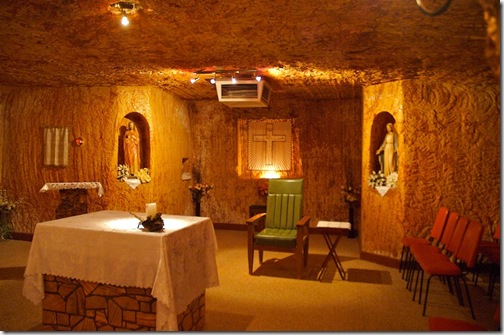 Coober Pedy is an opal mining town 846 kilometres north of Adelaide. It is famous in part because many of the homes have been built underground often in old mines to escape the heat. The earth provides natural insulation.

You can follow Gordon's full series of photos on the trip by clicking here.

The discussion at the ALP National Conference on gay marriage drew Neil back to this topic. The link in Neil's post back to an earlier post of his will take you into an October 2007 blogging conversation that a number of us had on this topic. It was an interesting discussion.

The cat wants to be fed!

In More on Indonesian terrorist bombing Neil also picked up posts by Rob Bainton in Sydney and Tikno in Indonesia. I found Tikno's post very interesting because he writes, I think, from an Indonesian Christian perspective.

Many years ago, an uncle of mine tried to explain to a bemused Liberal Party pre-selection meeting on the North Shore made up mainly of blue-rinsed ladies why he saw Muslim fundamentalism as the main coming challenge to world order. The cold war was still raging, anti-communism was still the theme of the day in many Liberal Party circles, so his audience found it hard to see the relevance. Needless to say, Jim did not win the pre-selection!

I don't think that Jim was anti-Muslim in any way. His argument was couched in terms of his perception of the dynamics within the Muslim faith.

He had very particular reasons for adopting the views that he did. He loved old Imperial India. During the Second World War he and his twin brother were sent to board at TAS, my old school. That is where Jim met my aunt, his wife to be. At the end of the war Jim returned to India, leaving during partition. He travelled through some of the worst affected areas, at one point walking across a bridge over a ravine filled with the bodies of those killed for religious reasons.

Jim's shelves were filled with books on India. In many ways he still saw the sub-continent as home.

Jim and I were quite close. While I wasn't blind to his faults, I also understood and was interested in his ideas and especially the stories of his side of the family. They certainly influenced my thinking.

The model that I use to interpret developments in the Muslim world comes partly from Jim, also from my own studies of European history. My problem with so many of the interpretations of current developments is that they are in fact one dimensional.

I do not share the moral relativism that seems central to that strange beast called post-modernism. Over the last week my train reading has been Helen Garner's Joe Cinque's Consolation, the story of a very horrid Canberra murder. I kept saying, as she did, why didn't anybody stop this! In a way, the book reveals the moral void at the heart of of a particular group, as well as the way in which the substitution of law for morality and individual responsibility creates a blight.

The story is made more dreadful because it is set in a world that I knew; I lived in Canberra and was also a full time student at ANU for one year. I kept asking comparing the Canberra I knew with the one in the book, how did this dreadful decline occur?

This may sound a long way from my starting point, but I think that it sets a context.

Tikno is writing from a moral, not political, perspective.

In pointing to the opposition to the fundamentalists who would kill to impose their view of the world - they hold the same view as those who burnt people at the stake in Europe - he makes the point as I see it that part of the battle for hearts and minds must by fought out by Muslims within the Muslim faith.

He also makes a very special point about Indonesia:

I'm strongly believe that there are still a lot of good Muslim, even far more than you imagine. I live in Indonesia, the country with the largest Muslim population in the world, and I have many Muslim friends here. They (my Muslim friends) are also condemns terrorism action.

Now I want to set a context here.

One of the challenges that Indonesia faces is the maintenance of unity within diversity. Indonesia may be the largest Muslim country in the world, but it also has a very substantial Christian minority. In recent years, the religious divides here have flowed over into the most dreadful violence. At one level, this is a state problem. However, the real solution has to lie at individual level, the fight of people of all faiths (here I include all faiths including secularism and modern atheism) to find a way to live together.

Living together cannot come from the imposition of state power, although this has a place. Rather, it comes from learning and joining, from the respect for differences.

Here I find Tikno rather inspirational because he cares and he tries.

Joe Cinque would still be alive, his family united not torn, if more people cared and tried.

Why did Cadbury's make white chocolate? So black kids could get dirty too!

This joke comes from an Aboriginal colleague. I laughed because it was so unexpected.

I have continued to enjoy Aboriginal Art & Culture: an American eye. I find it interesting that someone living in the US should have such a powerful Australian blog.

Understanding the Research Game by Prof Victor Minichiello on the UNE senior management blog explores some of the issues involved in getting research grants.

As it happens, having finished Joe Cinque's Consolation my train reading has switched to Keith Leopold's Came to Booloominbah: a country scholar's progress 1938-1942 (University of New England Press, Armidale 1988). This book with its memories of university education in times past in Armidale and Sydney actually provides an interesting counterpoint to Professor Minichello's post.

While I am a lot younger than Keith, he died in 1999, I grew up in the world he described. There were negative elements, but I do miss many aspects of it as compared to Professor Minichello's views. But that's a matter for another post!

Speaking of academic life, Thomas is coming to the end of his university career. Thomas has been at university for my entire blogging life. I suppose we have to let the young go, but it will seem odd! Still, so long as we can keep Thomas writing outside Twitter and Facebook (!), I am looking forward to the next stages.

I have barely kept scratched the surface, but I have other things to do. Like gardening!

Thank you Jim.
Finally I came to a conclusion like this: "They are "naughty children" who using the "false truth" to rebel against their parents. The false testimony is similar with lying."

But... my big question (my confusion) at the last paragraph still not get answered from readers.