Bangkok, prejudice and the importance of manners

The troubles in Bangkok left me feeling very sad, if also relieved that the girls were well back before the trouble escalated.

I have very fond memories of Bangkok because brother David and I stayed there for three months while Prof (we all called Dad Prof) was working for what was then ECAFE. In fact my parents lived in Bangkok for two yearly periods, the second while Dad was, I think, regional economist for the ILO.

Both times they stayed at the same serviced apartments. I spent a little while searching Google maps and think I located where the apartments were, but I need the precise street address to be sure. So much has changed, of course.

Upon our arrival, we received a lecture on Thai customs, what would now be called "cultural sensitivity training" but was then simply called good manners.

The military was everywhere. General Sarit had died three years before, but still cast a long shadow. With Thanom Kittikachorn as Prime Minister, the military remained in firm control. It wasn't just soldiers in the street, the presence here wasn't overwhelming most of the time, but rather a series of littler things such a military owned chain of petrol stations.

While in Bangkok we went to a large army organised birthday party as guests of the man who owned the apartments. My memory says that it was in honour of a man who had been 2ic to General Sarit. That's probably not quite right, but certainly it it was a big affair.

As we drove in, we passed a paddock full of Army trucks. Entering the area past the military guards, we found our table (the whole party was being held out-doors) near the stage. There were only a small number of Europeans present, perhaps eight in all including us. There was no wine as there probably would be now, but lots of bottles of Johnny Walker red label scotch.

I don't remember the food beyond enjoying it, while the speeches were in Thai and therefore largely passed me by. I do remember the entertainment.

The Army had brought down a group of traditional dancers from North Thailand. After the main dances and with much giggling, they asked Prof to dance. He hastily declined, but pointed to me. I had had enough scotch to relax my inhibitions, so joined the girls on the stage. I am not a naturally good dancer, and there was much hilarity as I tried to follow the girls' moves.

All this led to me being invited to join the official table. There I received a useful lesson. I was sat beside a man who turned out to be a minister, Education from memory, in the Thai Government. While I sat there drinking the official scotch - black label this time, not red - he explained to me that we were only there as a special favour to the man who had invited us. The Thais, he said, looked down on Europeans who would not normally be invited to a function such as this.

Memory is an imperfect beast when it comes to detail, much better when it comes to emotional content. I was only twenty.  My main reaction was one of interest, curiosity, even a little bit flattered that I was there.

Growing up, I hadn't really been personally conscious of ethnic, cultural or religious prejudice, beyond the great sectarian divide that scarred Australian society. It was there, of course, but I didn't see it. Certainly at UNE with its large number of Columbo Plan students there was no obvious racism.

It took that trip to give emotional content to prejudice, for I saw a fair bit of it.

In Singapore my brother and I spent a week with an Indian family. Our host was a university lecturer. During that week we were invited to spend the day with a very wealthy Chinese family, friends of my father from Bangkok. Our host was invited as well. The tensions between the family and our host were palpable.

In Taiping in Malaysia we stayed for a week with a Chinese family. Our host in this case was a former tutor of Prof's, a very nice man indeed who was now working for Inland Revenue. He arranged for two young men from his office, both Chinese who spoke good English, to show us around.

When you spend as much time day and night as we did with them, you get to talking. I learned a fair bit about relations between Chinese and Malays from a Chinese perspective.

This was a sensitive time. 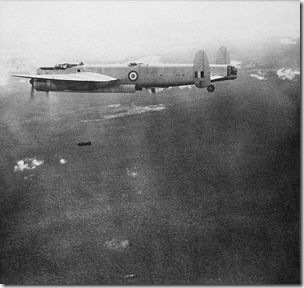 Singapore had left Malaysia. Confrontation, the undeclared war between Indonesia and the newly formed Malaysia, was in full swing. The Emergency, the war between the Government and the communist rebels, had finished in 1960 but would resume again in 1967.

I knew a fair bit about some of these things, partly because Australia had been actively involved and I had been interested in current affairs. The photo shows an Australian Avro Lincoln bomber dropping bombs on communist jungle targets in Malaya around 1950.

In addition to this interest, Aunt Helen had been a British Red Cross nurse in Malaya during the Emergency, driving to the kampongs to provide medical support. She fell in love with the country, and I had heard a lot about her experiences.

The big Malaysian race riots of 1969 were still four years away. However, the concerns held by our new Chinese friends were very evident. Our discussions were not political. Rather, I was just interested in what made Malaysia tick. I was then, as I am now, insatiably curious.

I said that these various experiences gave emotional content to prejudice. However, my reactions would probably seem odd to modern Australians. You see, I didn't see prejudice as necessarily a good or bad thing, just something that was and needed to be understood.

I really didn't have a problem with a Thai perception that Europeans were inferior. In Malaysia, I could understand the desire of Malays not to become a minority in what they saw in their own country, while also sympathising with my Chinese friends.

Where I did have a problem lay in the way that prejudices created barriers. In Singapore, for example, the tensions between our Indian host and the Chinese family made me very uncomfortable indeed for it breached what I thought of as two fundamental principles.

The first was good manners. All societies, and the relationships between societies, are ruled by manners. In Thailand, David and I needed to respect Thai manners. I am not saying that we did it perfectly, just that we were aware of the need. If you invite some one to join you as a guest and they accept, then both guest and host need to observe conventions to maintain common civility.

Another thing that influenced me on this trip was my exposure to what I came to think of as the ugly Australian. By this I mean simply that some Australians I met, a very small minority I should add, were quite contemptuous of the need to adjust to the societies in which they were now living. They just didn't see it.

To finish with a final note on the Thais.

I already had positive views on the Thais from my direct contacts in Armidale. During that time in Bangkok I found them to be almost universally courteous and indeed kind. I came away with a great affection for Thailand and the ordinary Thai people. That remains.