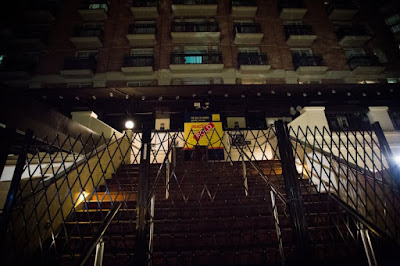 Today's short post is just a note to record things that I want to come back to.

In a post on Linkedin Pulse, Would the last person in Sydney please turn the lights out?, Matt Barrie mauls the Sydney licensing laws that have turned the traditional entertainment precincts into ghost towns. Mr Barrie's fury is not limited to those laws, but extends to other aspects of the nanny state in NSW.

It's an unbalanced post, mixing together different issues. It's also a post that would seem very obscure to residents outside the harbour side city. However, he does make valid points.

Meantime, the ban on smoking in Sydney's Martin Place has been hailed as a success because it has reduced the number of discarded butts from 450 per day to less than 100 now. There are plans now to extend the ban to other areas of the CBD. 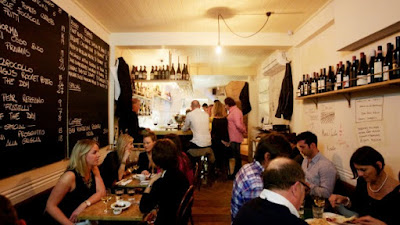 Continuing with this theme, it appears that a fashionable Sydney restaurant has been cautioned by the police (here, here) over its blackboard menu and wine list. According to a police spokesman. it is "common for police to provide advice to licensees regarding potential licensing breaches or issues during business inspections,"

Cynically, this one struck home because it affected the non-smoking fashionable majority who might otherwise support the anti-smoking, anti-alcohol restrictions.

Meantime, to use that word again while moving to another state, the Townsville Crocodiles.National Basketball League team has been forced to surrender its homemade t-shirt cannon to police after it was deemed a category B weapon. The cannon has apparently been in use for over ten years. The club CEO expressed bewilderment, but said that if that was the law, that was the law. The club would comply.

I know that you can see where I am going in all this. For the moment and as I said, I just wanted to record things for later use. 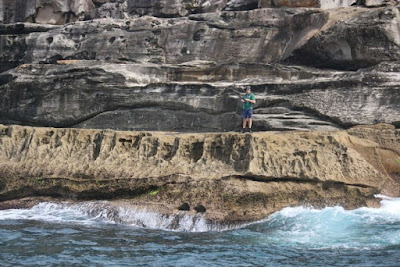 In comments, kvd pointed to the latest moves, compulsory life jackets for rock fishermen. There have been 47 deaths in NSW from rock fishing over the last four years so there is clearly a major problem. The Minister admits that it will be difficult legislation to enforce.

kvd also wished to get the but counting job in . I am sure that the City of would love to add him to its rangers. Then he, too, could do really socially useful things.

I agree that some limits should be placed on smoking and drinking in public places. However, I think it has really gone too far. It's a bit like everyone is being punished because of a few bad eggs. What we need to look at is...how do we deal with those bad eggs in the first place, before they become a problem? And what are our drug and mental health facilities like?

I think that ALL rock fishermen should be forced to wear bike helmets. And all smokers should have to wear Hi-Viz life jackets. And bike riders should only be allowed to fish in non-smoking organic wholefood restaurants, using biodegradable rods and lines.

The NSW Premier has announced an inquiry into the NSW licensing laws including the Sydney lock-out provisions to be headed by Ian Callinan QC. The terms of reference are fairly legalistic.The review was required by the terms of the legislation, but its progress is unusually fast by NSW standards. Interestingly, the impact of the 10pm bottle shop closure requirements is included. This is an area where National Party MPs have parted company with their city colleagues because of the country impact of the legal restriction.

NSW Premier Mike Baird has gone on the offensive over the whole matter. This is what he wrote on his Facebook page:

Let’s start with a statistic about Sydney’s nightlife that matters: alcohol related assaults have decreased by 42.2 per cent in the CBD since we introduced the “lock-out laws”.

And they’re down by over 60 per cent in Kings Cross.

But… didn’t we achieve this by shutting down the whole city and killing its nightlife?

Well, one last statistic: the number of small bars in Sydney has more than doubled in the same time period.

There has been a growing hysteria this week about nightlife in Sydney.

The main complaints seem to be that you can’t drink till dawn any more and you can’t impulse-buy a bottle of white after 10pm.

I understand that this presents an inconvenience. Some say this makes us an international embarrassment.

And there is nothing embarrassing about that.

From the outset, these laws have been about fixing a serious problem. Violence had spiralled out of control, people were literally being punched to death in the city, and there were city streets too dangerous to stroll down on a Friday night. The community was rightly outraged. I was personally outraged. I met face to face with the families of victims. You don’t need to see that sort of pain too often to realise there is a problem that needs fixing. And the Government was determined to act.

We introduced laws to curb violence and to eliminate drinking ghettos by redistributing the nightlife across the city, making the whole city more vibrant.

Now, some have suggested these laws are really about moralising. They are right. These laws are about the moral obligation we have to protect innocent people from drunken violence.

At this stage, some of the evidence is anecdotal. But lots of hard data is starting to come in. And it is all telling a similar story.

Over the coming months a detailed review into the effects of the lock-out laws will be undertaken. I await this work with interest. But as I’ve said before, it is going to take a lot for me to change my mind on a policy that is so clearly improving this city.

Now some, who wish to define our city by one street on Kings Cross, make the hysterical claim that Sydney is dead.

They couldn't be more wrong. This is the greatest city in the world and it is now safer and more vibrant than ever.

Meantime, the campaign against Nanny State social regulation and especially the Sydney lock-out laws appears to be gathering strength. Here are a few examples:
This is just a sample.

This update is a report, not an analysis.There is all sorts of special pleading around. There were also problems. But I think that it is true that the NSW Government has adopted, as it has done so before, a blunt legalistic approach. This time, enough people have been affected to create a real backlash.

You know that there may be a problem when Melbourne starts promoting itself (Dear Sydney, drop by for a drink some night. Love, Melbourne) on the basis that you can get a drink! Melbourne has been incredibly successful in promoting itself as a life style city.

Organised campaign against the Sydney lock-out laws continues: A huge anti-lockouts rally is happening this weekend in Sydney

ps: when the butt-counting person retires, could I have that job?

I agree that some limits should be placed on smoking and drinking in public places. However, I think it has really gone too far. It's a bit like everyone is being punished because of a few bad eggs. What we need to look at is...how do we deal with those bad eggs in the first place, before they become a problem? And what are our drug and mental health facilities like?

I think that ALL rock fishermen should be forced to wear bike helmets. And all smokers should have to wear Hi-Viz life jackets. And bike riders should only be allowed to fish in non-smoking organic wholefood restaurants, using biodegradable rods and lines.

I wish there was a "like" button on this. You guys are hilarious! GL

I agree with GL. I am going to bring the comments up in the main post, along with an update on the latest moves.