Sunday Essay - decline of the volunteer

With a break in the rain, I headed out yesterday to buy some groceries. I was going to walk, but quickly changed my mind because of the wind, so headed for the bus stop. Standing there with palm fronds coming down onto the top of the bus shelter felt quite uncomfortable. Fortunately the wind dropped. 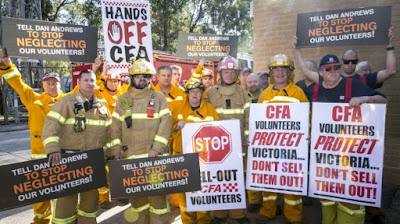 Down south in Victoria, the trouble over the Country Fire Authority (CFA) has deepened. It's remarkably difficult to keep track of issues across Australia, more so since paywalls started coming in. I had no idea of this particular dispute until I bought a copy of the Australian to find it featured. Then I started digging.

In very simple terms, Victoria has to firefighting bodies, the Metropolitan Fire Brigade (MFB) and the Country Fire Authority. To those outside Victoria and perhaps within, the CFA is far better known because of its role in fighting bushfires.

The MFB operates with paid staff, while the CFA depends on a large number of volunteers with some paid staff. The United Fire Fighters Union represents MFB staff and has a institutionalised role in the management of the MFB. The UFFU wishes to extend its role in the CFA. After a rancorous dispute, Fair Work Commissioner Julius Roe delivered non-binding recommendations supporting the demands of the UFFU for greater control of the CFA, infuriating the Authority and its volunteer base.

Victorian Emergency Services Minister Jane Garrett with the apparent backing of the Premier backed the CFA and its volunteers in opposing the FWC recommendations. Then it appears that the Premier after consultation with the Union shifted his position, in some ways hanging his minister out to dry. The end result was a political mess, with a search now on for a compromise.

A lot of the reporting has been phrased in terms of industrial relations issues with, in the case of the Australian and its reporting, a focus on the union power issue. I want to focus on a slightly different issue, the conflict between professionalisation, state control and the survival of the volunteer ethos.

Traditionally, Australia has relied on volunteers to deliver many community services or to identify and meet community needs. There were good practical reasons for this, especially in country areas where populations were thinner and governments more remote. One outcome was, I think, an unusually high proportion by global standards of popular involvement in voluntary work. I say I think because I have not seen proper global comparisons.

As the state expanded its effective role, it took over activities that had previously been met by voluntary work. There is nothing wrong with this. In many cases, it meant supply of community services that could not be done effectively by cash constrained volunteer groups. The volunteer spirit remained, but redeployed into new areas. However, over the last three decades in particular, the volunteer spirit has gone into decline.

Again, I cannot give you hard data to measure this. But based on my own observations, there are fewer volunteers as a proportion of the population and those that remain are older. There has been a cultural shift of significant proportions.

Many reasons have been advanced for this decline.

Australians have, one school argues. become more individualistic and self-centered.  I think that there is some truth in this, but it's clearly not the whole story. You only have to look at the Sydney Olympics or responses to individual disasters to know that the old spirit continues.

Another school argues that the state is doing too much, that it is taking away individual responsibility - let the state do it - thus reducing the volunteer spirit. Again. there is some truth in this. However, it is not clear that the real scope of state service delivery has actually expanded over the last thirty years. You can get a feel for this by asking a simple question: what is the state doing today that it wasn't doing in 1986?

Take education. In 1986, the state was responsible for the delivery of mass education from primary through secondary to technical and university education. It still is. The big differences relate to the continued rise in the importance of Federal funding, a greater subsidisation of the private sector and a far more heavy handed regulatory and quality framework.

In social policy, I am hard pressed to think of a single thing in 2016 that the state wasn't doing in 1986, although the form may have changed. In health, too, the state is still doing the same thing.

So I don't think that we can necessarily say the changes that have taken place are due to an expansion of state activity as such. That said, there have been changes in the way that services are delivered that have had an impact.

The first is what I call the bitsy effect. While the totality of government activities may not have changed, Australian governments at all levels want to be seen to be doing new things. To achieve this, they repackage activities that they were doing into new package with a unique name attached, thus creating an apparently new initiative. Then, too, they use relatively small sums of money to create new activities at the margin that respond to particular community pressure points.

This does, I think, create an expectation that if there is a problem, governments will fix it. Effort that might have gone into creating new community activities is sidetracked into seeking funds from Government for that activity.

There is also the creeping professionalisation that I referred to earlier. In the desire to improve standards and performance, professional staff start replacing volunteers in major activities such as fire fighting, while governments place greater demands on those receiving funding in terms both of applications and subsequent reporting.  Reporting can be a particular burden because the information sought has become broader and has to be provided in very particular formats, requiring time, computer systems and expertise. Faced with the choice of either becoming more professional or getting out, many volunteers choose exit.

Another factor then comes in in the diminishing space occupied by voluntary activities, the increasing compliance burden. Safety regulations, health regulations, insurance requirements, working with children requirements, obligatory criminal checks, political party registration requirements all combine to make life difficult. One side effect again is to increase professionalisation. In many cases, you require umbrella organisations with the staff and systems necessary to ensure compliance and to provide the necessary insurances.

People still volunteer, especially where their children are involved and especially in the country. However, the volunteer workforce is shrinking and we are, I think, all the poorer for that.
Posted by Jim Belshaw at 7:39 pm

Jim, when I looked for data on volunteering a few years ago, I was surprised to find that it was increasing in Australia. An increase in rates of volunteering was offset to some extent by a decline in number of hours donated per person. See: http://www.pc.gov.au/inquiries/completed/not-for-profit/report

There may now be more recent data available.

Hi Winton and thanks. I had forgotten that report. I must read it properly again.

The stats appear to be for 1999-2000 compared with 06-07, so not a long period. I was thinking of a much longer period, the last thirty years. NFP staff numbers grew much more rapidly than volunteer hours, 5.7% v 1.6%. The big growth in volunteer hours was in culture and recreation.

There should be later ABS statistics. Would be interesting if we could get longer term data.

I still run across a lot of volunteers. I would, working in the aid sector and being a Rotary member, but even so...

I find that volunteers are either young (20's or so) or older (retired, or at least empty nesters). I suspect that the move to 2 income families might be a factor.

BTW, i have rubbish internet so I've given up trying to follow the Australian election. If any BIG news happens (and I trust the judgement of this forum rather more than the mass media), would someone kindly post about it?

On a connected note, Jim was surmising that the Libs and Greens would be the losers from the changes to the senate voting and that the microparties were representative. I haven't got the reference, but Antony Green argues otherwise rather persuasively.

It's a risky business, volunteering. Maybe David Spiegelhalter should be invited to give an opinion :)

I'm sure that the good professor could provide a rational risk analysis! Was he your prof Winton?

I am sure that you are right on the two income family, although I think that its only part of the answer. People just get tired if they have children. I think that an associated problem is longer working hours and longer travel time.

Jim, re longer working hours, it was certainly true in my case, but I read that many Australians are under-employed (they would work more hours if they could), so I'm not sure about that one.

Sorry Jim, I was just.joking. David Spiegelhalter is the Winton Professor for the Public Understanding of Risk in the Statistical Laboratory, Centre for Mathematical Sciences, University of Cambridge. Unfortunately, I have nothing to do with the Winton Charitable Foundation that established the chair.