This is the type of post that would normally go on New England's History. I am putting it here because I think that is an interesting example of the way in which a change in the use of words can lead to unexpected changes in thinking.

There are two presently recurrent themes in a lot of historical writing on the Australian Aborigines, invasion and massacre.

Invasion is the preferred Aboriginal usage for the arrival of the British. Increasingly, too, there is tendency to glory in those who fought back. Massacre as a term is applied to a very large degree to describe certain types of killing of Aborigines during the period of the moving frontier. This is well captured 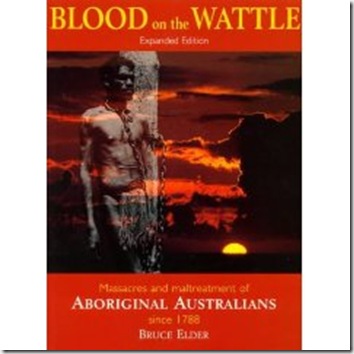 in Bruce Elder's book Blood on the Wattle. I was browsing this at lunchtime in a book shop to see if I wanted to buy it. I think that I will.

Now to avoid getting caught in unnecessary traps here, I am not interested in the issue as to whether stories of Aboriginal deaths were or were not exaggerated. That is a debate in Australian historiography. I am only interested in what actually happened as best we can determine in a particular area.

The problem I face is simply this.

This is where my problems started to arise, because it meant that I had to apply the same language to both sides. I had to be consistent.

To illustrate my problem, take the word massacre. One definition says the intentional killing of a considerable number of human beings, under circumstances of atrocity or cruelty, or contrary to the usages of civilized people. A second definition states promiscuous slaughter of many who can not make resistance, or much resistance.

Now the murder of Aborigines at Myall Creek in 1838 was, I think, a massacre. Twenty eight people were killed in what could be fairly described as promiscuous slaughter. But what about the murder of Mrs Mason, her baby, two young daughters and the shepherd who tried to help them at Bald Hills. Massacre or simply brutal murder?

Certainly the local Europeans came to call it a massacre. But the numbers involved are smaller, so it is probably best described as a brutal murder. Or is a better not to use certain words at all, instead relying on factual description?

You see my problem? The fatal spearing of a single shepherd may or may not be a murder. I guess it depends on motive and circumstance. However, even the very word murder carries connotations today that were in some ways quite alien to Aboriginal society.

I am not quite sure where I go with all this. However, it does show the need to be very careful in the use of words.

As so often happens when I get involved with an idea, I have spent the last hour or so simply digging into what has been written before. Google books is really very useful when it comes to a quick review. As part of this, I did a very quick review of material on the small pox epidemics that affected Aboriginal populations.

Because I am trying to write at a regional level, broader stuff is only relevant to the degree that it has local implications. I say this because I am actually not sure that the impact of small pox was quite as great outside Sydney as sometimes suggested.

Interesting post. I have read Blood on the Wattle, but some time ago. It is interesting.

...glory in those who fought back. Given how little we heard of such before recent times, I think "acknowledge" would be the word I would choose rather than "glory in". After all, the "myth" until quite recently was that the native population kind of melted away passively, unlike real warriors like the Maori in NZ. Some degree of overstatement is understandable in correcting the older myth.

Hard not to use the word "invasion"; were such events ever to overtake us I am sure we would see it as invasion. However, I do rather like David Day's terminology because it cuts through some of the baggage "invasion" brings and acknowledges too that "supplanting societies" are not unique to this country or our history. See his Conquest, Harper Collins 2005. I also find he is a good read.

Heard about an interesting article in the latest Griffith Review about local histories - the author is a Russian woman named Maria Tumarkin. It made me think of you, anyway, and your New England History.

Thanks, Neil. I had a browse of your original post - I had forgotten it - and of the book itself via Google books. I will have to read it.

Bruce Elder bases part of his work on Geoff Blomfield's Baal Belbora. I knew Geoff, he was good friends with Dad, and actually went to the launch of the book. I have a copy the original edition somewhere in storage, but I see that there was an updated corrected edition.

Hi LE, will check that review.

Neil, I think that you would have got on like a house on fire with Geof. He was one of nature's gentlemen!