In the early hours of 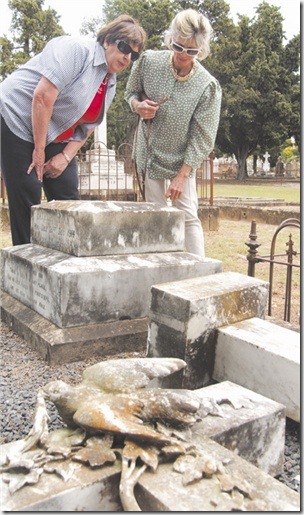 Saturday morning 3 October 2009, vandals attacked the old and historic Armidale cemetery. In a spree that must have lasted for some time, they inflicted damage estimated at $A400,000. This is just the monetary cost.

This first photo shows damage done to the grave of Patrick Ryan. His was one of five graves that were on the receiving end of vandalism in the old Catholic section of the Armidale Cemetery.

The headstones on the graves were pushed over and left smashed on the ground. The vandals also broke down the door of the chapel building on the premises.

Mr Ryan drove Cobb & Co coaches from Armidale to Hillgrove, and then he had a garage in Beardy St. He married married Emilia Gallegos and the couple had 16 children.

The family had a long history in the defence forces. Some of the children served in the Boer War. Others served in both the world wars and their descendants are currently serving in Afghanistan, East Timor and Iraq.

One of his sons, Ossie, started the company Ryan’s Cordials with his son Bill.The  factory was located on the corner of Beardy and Butler streets and was well known to all Armidale people of the period. Every Christmas in our case we would go down there to collect Christmas drinks.

Bill went on to become mayor of Armidale.

The people in the photo are Patrick Ryan's grandchildren. 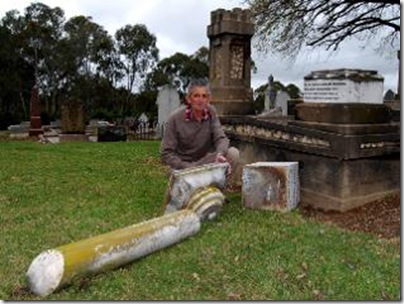 grandmother and great-grandparents; a marble pillar erected in 1920 was toppled and broken. If my memory serves me correctly, this is in the Methodist section.

Among the other ruined grave sites was a 250kg granite headstone, ripped from its steel mounting and pushed to the ground.

This is not the first vandal attack on this cemetery, nor is it the only attack on Australian cemeteries. There have been several in recent years in other places. However, for scale and sheer mindless brutality, this one stands out. 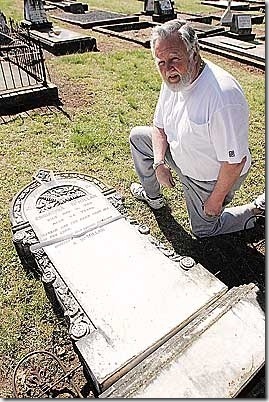 final photo shows local funeral director Alan Piddington beside another of the wrecked graves. The Piddingtons have been Armidale funeral directors all my life. In my case they have buried my grandfather and mother on Mum's side, my brother Michael, my mother and father, Uncle Ron and Aunt Kay and Aunt Helen.

Alan wonders how the damage can ever be restored and, too, who will pay for it. The fragile marble shattered beyond repair.

I wonder about this too. However, I also have a strictly personal interest.

It's not just that I know the families affected.

Both brother Michael and my grandparents are buried in the old Methodist cemetery.

The small size of Michael's tomb stone (he died at birth) probably means that it is safe. My grandparents' is much larger.

I am now trying to find out whether it, too, was affected.

How horrible.
Those monuments weren't only family markers, they were works of art. Hopefully, some of it can be restored, but really.... who would do such a thing?

How horrid! Why do they do these things? What motivates them? Perhaps you can post about that angle.

Assuming that it wasn't a political protest, there is a damage in the soul of some people linked to inability to feel empathy.

RM, I will will write something in due course. I can do it now in a general sense, but if I am to link it to this episode, I need to wait for the police investigation.

Man has been charged. Bradley Whalan. Nothing to do with the football weekend.

I am very grateful for this advice, Caroline. With so many people in Armidale, there was a risk that it might have been damage by visitors.

I did not mention the carnival at all in the story for fear that I might establish a connection.

As it happened, I knew some of the people going to Armidale for the carnival, some who had wanted to go but who could not find accommodation, and indeed had tried to suggest accommodation options.

I had no idea until this year just how important the carnival was to the Aboriginal community. It really is a big deal. To have had one of the visitors responsible would have cast a cloud on the pleasure of those who did go.

I still intend to fulfil my promise to Ramana. I just needed confirmation that it wasn't anything to do with the carnival.

Once I saw your email I found the story in the Armidale Express confirming the arrest.

Once agin, my very sincere thanks.