Armidale vs Canada in Rugby 1960

I became completely distracted this morning. I had intended to write a short post on a completely different matter, boxing in fact. I went searching for a photo to illustrate and found the following. Comments follow after the photo. 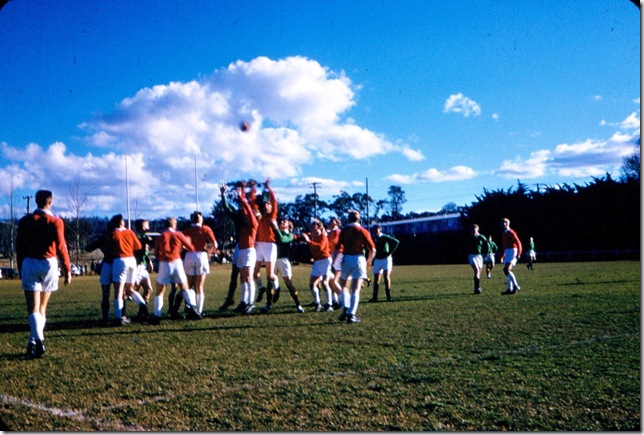 I think that we won, but I can't remember the score. I do remember the long grid iron passes the Canadian back line used. It's a bit like the kids from Aussie Rules playing areas who ended up playing Rugby at school or university in Armidale. Their kicking was very good because they carried skills across.

Last year I went in search of the Canadian school plus any record of the visit. It was just one of those sidetracks that we are all prone too. After hours, I could find nothing. Now, by accident, I find a single photo posted to the TAS photo archive.

I said that I was distracted. A related nostalgia (history) piece - Armidale school life, 1890s.

HAH! I know that feeling all too well – of starting with the intention of writing about one thing and ending up doing another! You might be well on the way to becoming a candidate for the subject of my most recent blog posting. This is not a shameless self-promotion – it just seems to fit!

You may also be interested in my own Rugby Union story from the 1960s, and anyone interested may like to copy and paste this reference into their browser:

With all good wishes – hey - keep focussed! :) For the record, I am now writing this slap bang in the middle of doing something else! Do as I say, not do as I do....

Thanks, Denis. Will pick up in later posts.

anyway, I am going to apply the scholarship to Australia this month. However in my application, I have to choose two Australia Universities. I choose Peace and Conflict Studies to Sydney University and I haven't found what to be my 2nd option. I am intending to take International studies as my 2nd option actually but still confusing the university. May be you can give me enlighten where I can take the international studies for my 2nd option :) actually I prefer to choose more quiet city... may be you have some recommendation.

ps. One of the most memorable things when we were school is a match. It always bring a joy and excitement. I have also some nice memories when I competed with other class in tug of war match

Hi Niar, good to hear from you. We are all well.

I haven't looked at course structures, but I would consider the Australian National University. It (Canberra) is a smaller city, it's a very good university, and you get exposure to Australia's national capital.

I would suggest UNE, my old uni, because I know that you would love Armidale and the uni, but I'm not sure that this would best meet your career needs as compared to ANU (also my old uni).

If you come to Sydney, do consider staying at International House. Dee is chair of council.

Regardless of where you go, I hope that I will have some chance to help introduce to this country and my family. It would give me great pleasure!

Thank you so much for your suggestion. Yes, I have some inputs from my friends regarding ANU. But as I look for university that the rate is lower than Sydney as a 2nd choice. ANU is equal even higher than Sydney.

UNE sounds good. U=Yes I've herad Armidale is a good place. I will try to find some info of its course through website.

Thanks so much Jim, surely I am happy if someday I can meet you in Australia. I hope I can meet their qualification considering it's a high competition as well

Good luck, Niar. Keep me in touch with progress.

Niar, thinking further. While you should do your own research and check the web site, if you email me (ndarala(at)optusnet(dot)com(dot)au tour exact requirements I will email my contacts at UNE to get some additional feedback.

Thank you. I will try to send you an email. Thanks for the help anyhow. :)