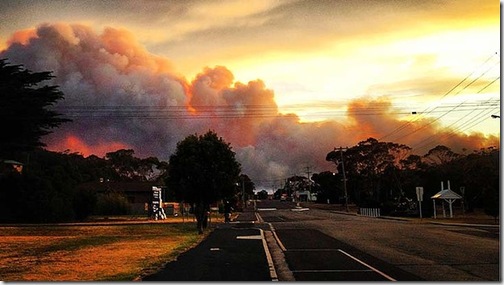 This is likely to be a very serious fire period in Australia because of the combination of very high heat with fuel (scrub, grass, fallen branches etc) accumulated during the earlier wet period.

As I write, bushfires are ravaging parts of Tasmania. This photo from the Sydney Morning Herald's story was taken at Bicheno. Over October and early November last year, a big fire in the ranges east of Armidale burnt out some 50,000 hectares, an area larger than Malta or Andorra.

That fire was big, but not the biggest by any means. The longest continuous fire emergency in NSW was between 21 December 2001 and 13 January 2002 when widespread severe bushfires burned throughout much of NSW - NE, Central Coast, Greater Sydney Region, Blue Mountains, Central West and South Coast and hinterland - and the ACT.  Ultimately over 650,000 ha (1.6 million acres) were burnt, an area over twice the size of Luxemburg. Still big, but not the biggest.

In area terms, the largest fire was that of Black Thursday, 6 February 185'1 in Victoria. This burnt out approximately 5 million hectares, an area larger than some twenty three European countries.

As you might have expected, I have written a fair bit on bushfires, beginning with Australia and its People - a funny upside down land on 22 January 2007 when fires were raging. This morning's musings ramble across some of the interconnected themes that emerged in my writing. I am not going to bore you with all the links, although I will give some.

The Wikipedia article, Bushfires in Australia, makes the point that certain native flora in Australia have evolved to rely on bushfires as a means of reproduction and fire events are an interwoven and an essential part of the ecology of the continent. In some eucalypt and banksia species, for example, fire causes seed pods to open, which allows them to germinate. Fire also encourages the growth of new grassland plants. Other species have adapted to recover quickly from fire.

The article also points out  that the Australian Aborigines used fire for a variety of purposes, including the encouragement of grasslands for hunting purposes and the clearing of tracks through dense vegetation. In doing so, they modified the environment. All this is true enough, but there is a little more to it than that.

Types of Fire & their impact

The Wikipedia article classifies fires in just two ways,  hilly/mountainous fires and flat/grassland fires. This is misleading. A far better classification is in terms of heat and size.

A cool fire burns along the ground, clearing grass and underbrush. The heat created by a grass fire can be intense, but generally such fires burn out quickly. They may have a big impact, but it's in a small area.

By contrast, hot fires get into the canopy, and then spread from tree to tree. The Australian eucalypt exudes flammable vapour. Fire storms are created with winds that throw embers well in advance of the fire; the bush can literally explode. The damage is intense.

While it's true that certain Australian species actually depend upon fire, this is again not universally true. The capacity to recover from fire varies greatly. A really hot fire can wipe out both plants and animals across a wide area; only the very fire resistant remain. Recovery can be very slow in such circumstances.

If you look at the huge Victorian fire of 1851 or some of the later big blazes, you have to ask the question how did the Aborigines survive such fires? Surely they must have wiped out entire local Aboriginal populations?

The answer is that they didn't have to. Australia's very big blazes are a European creation. In Train Reading - Gammage, the Aborigines & the environment, I looked at the Aboriginal use of fire.

The Aboriginal approach was very different. To the Aborigines, fire was a practical tool to be used for a variety of purposes. Further, their approach was localised, undertaken by people with intimate knowledge of their local environment. They knew which class of fire would give the best results. They also needed to avoid creating fires that might affect neighbouring groups in adverse ways. Certain types of burning-off were done cooperatively.

The end result was a patterned landscape that, among other things, reduced the incidence of big fires and also provided natural refuges for humans and animals alike.

The Impact of the Europeans

The arrival of the new European colonists affected the landscape in a variety of ways. The first and most devastating impact lay in the withdrawal of Aboriginal fire management techniques. Within decades, the combination of disease with land occupation wiped out previous land management methods. Fuel grew, refuges vanished. The conflagration of 1851 was one result.

The European settlers affected the landscape in other ways. Stock damaged water systems, the land compacted;  it became drier. In some areas trees were cut down, but in others trees grew, creating new fire sites. Eric Rolls' brilliant book A Million Wild Acres explores this impact in one area, the story of the Pilliga Scrub.

The European settlers quickly found that they, too, needed to use fire. Open park like areas became over-run by scrub. Grasses deteriorated. Fire was used to create new grasses, to burn cleared timber. The growth of national parks in the twentieth century created a new variable, for it made the state increasingly responsible for fire control in an environment where what is must be protected as compared to what might be or indeed what was.

The spread of urban Australia created a further fire stress, for it exposed more and more Australians to risk of bushfire. Insurance claims skyrocketed. More controls were introduced.

Modern Australian Governments have neither the knowledge nor the resources required to mimic the Aboriginal approach. We can only seek to control, to minimise risk.

The 2007 fires got me thinking about the importance of our volunteer system, about the way in which our total system depended on volunteers. In California wild fires - a systemic failure? I compared our system to the Californian experience. One distinction was the presence of volunteers, a second the Californian focus on mandatory evacuations. I thought that the Australian approach was better.

In February 2009, there were disastrous bushfires in Victoria. I first reported on them in Victoria's fires - at least 14 dead. Then in Saturday morning musings - issues raised by the Victorian fires I tried to stand back and look at some of the issues raised. I followed this in May with Victoria's fires - leadership, authority and responsibility.

One side-effect of the Victorian inquiry was a shift towards the Californian mandatory evacuation approach. I do not agree with this. Some people who stay will die. That's a fact. But the willingness of people to defend their own homes is central to our system, Take that away and you create a new set of complications, for you substitute further central control for individual responsibility. And that has all sorts of costs.

I was going to finish this post by looking at new land management techniques. I fear that I have run out of time. Maybe later.