I didn’t get any response to my post Friday management note - Coles, Fonterra and the behavioural impact of cooperative structures, There were several elements in that post. Here I want to focus on one, cooperatives. I like cooperatives, but in Australia at least they are a much diminished breed. The lure of bigger immediate dollars from privatisation were just too great.

Is there  role for cooperatives? If so, how do we make them work? What problems have to be overcome?

How people in Muslim countries prefer women to dress in public

This one came from a Thomas retweet (@thomasee). It’s a Pew Research Report  on attitudes towards women’s headgear in certain predominantly Muslim countries. Meantime, the new rules re women visitors wearing burkas in the Australian Parliament have been relaxed. It’s actually 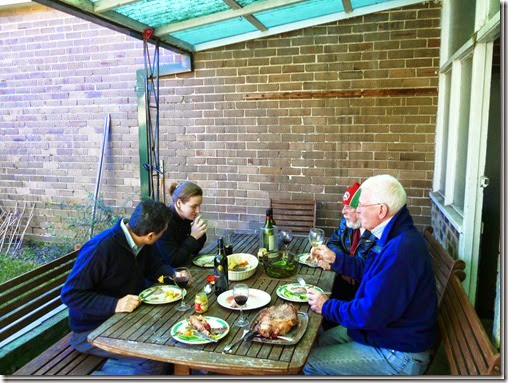 a rather strange story.

Crowd funding and other disruptive devices.

Back on Sunday 24 June  2012 I reported on a lunch at Astrolabe Road.   From left to right Noric Dilanchian, Clare Belshaw, Neil Whitfield and Dennis Sligar.

One of the things that we talked about at that lunch was the emergence of crowd funding. In simplest terms, these are platforms that put people who have projects in touch with people who might want to fund them. Kickstart is an example.

Since then, this type of platform has proliferated entering a range of arenas. Peer to peer lending is another example, bypassing the banks as middlemen. Trybooking is a third, a platfom that allows community organisations and others to sell and deliver tickets on-line without having their own system.

I have been watching all this for a while. I wondered if any readers had their own experiences and comments that they might like to share. This stuff is quite powerful.

Commenting that there had been some legal changes since July but the broad thrust was still right, Noric pointed me to this from July written by with Anton Joseph - Tax and valuation of crowdfunding initiatives.

Isn't the term "Crowd Funding" just a new fancy-shmancy way of saying "fund-raising"? Even if there is a possibility of a return then in reality it is just seeking investors... I don't think this is a new thing. Just new terminology?

My comment is our blog post titled "Tax and valuation of crowdfunding initiatives". Since writing it there's been more developments but they don't change the substance of the positions we took in the post.

Just a short comment on cooperatives:
There is a big problem in allowing owners to recoup the value of their investment when the firm accumulates assets through re-investment of profits. Last time I looked, NZ dairy farmers who decide to sell their farms and leave the industry get a poor return from their shares in Fonterra.

Hi Rod. In a sense you are right, but the platform makes the difference because it allows the proponent or proponents to reach out to a wider base in a low cost way sometimes seeking quite small sums of money. Once the platforms are there, their potential use seems to widen as people seek to use them in different ways.

Take a self-published book. You used to put out your money then try to recoup through sales. Alternatively, you directly asked people for cash to help fund you.

With crowd funding, you have the option of putting it out there as a project and getting cash up front. You still have to promote the project to those who might subscribe, but its another option.

That - the return to owner from capital, is an interesting one in a conceptual sense, Winton. I let my AMP policies lapse. Had I held on for another year, I would have received a large allocation of AMP stock. I was really annoyed.

The Fonterra model as I understand it allows farmers to realise the value of their equity from an internal market. I'm not sure how this works.

Oddly, the analytical model that I have in the back of my mind comes from law. There you have a partnership that provides a return from work (equivalent to the farmer selling milk)plus a return on capital. I have argues that the partnership needs to keep those elements separate. In law, too, you have the issue of how to pay exiting partners.

The goto guy on co-ops in Oz I think is Race Matthews.

He has a book Jobs of Our Own and is very open to friend requests on Facebook (i.e. he was willing to friend me).

Crowdfunding I find very hopeful. It is a little different to fundraising because it uses an existing platform rather than going to other organisations and events.

Jim, your AMP example illustrates the point I was making very well.
However, the extent of your loss might not not be huge if you kept your shares. I think the optimal strategy was to sell the shares soon after they floated.

My problem, of course, Winton lay in the fact that I didn't get the shares in the first place!

Evan, you have mentioned Race before. Not sure about Facebook, but will try to access some of his writing.

Crowd funding is a very unique way to raise funds for your projects, and very different from seeking finances through more traditional methods. It is a fairly new sector which is growing rapidly.