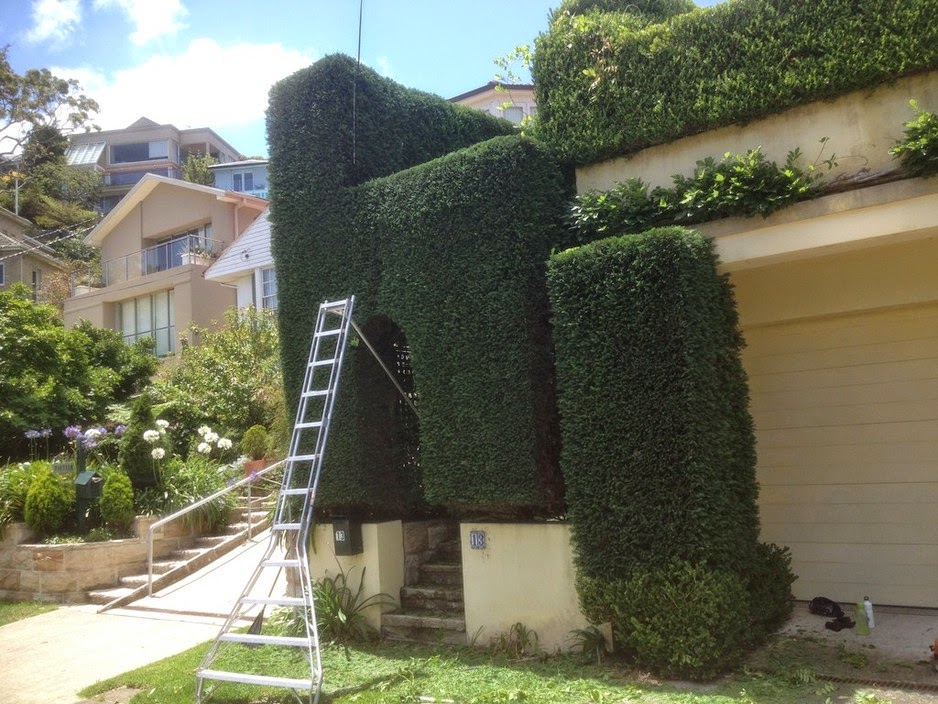 One of the joys of an interest in history is the way it allows me to meander.

This is a Mosman hedge. For those who don't know Mosman, it lies about 8k north east of the Sydney CBD over the bridge. A leafy suburb, it now has the highest median house prices in Australia.

Wandering round Mosman, I suddenly realized that the most noticeable feature of Mosman gardens was the formal hedge.They are everywhere. Sadly, I seem to have mislaid my camera (again), so can't take pictures in the way I would like.

How does this link to Australian history? Well, among other things, the story of the Australian garden, its rise and fall, is deeply entwined in Australian social history. Memo to self: time to join the Australian Garden History Society.


Just at the moment, I would be inclined to buy shares in Woodside or any other Australian gas entity. Looking at events in Eastern Ukraine, some cessation of Russian gas supplies to the EU would seem inevitable. I just don’t think that Mr Putin has the subtlety to handle the forces that he has unleashed.

I remain of the same view re Mr Putin. I just didn't foresee the wholesale collapse in oil prices that would have made an investment in Woodside a no-no for the present. I should have. The Australian financial press has been full of stories about the explosion in oil and gas production associated, among other things, with what has come to be called unconventional oil.

Can oil be unconventional? Well, no. Somehow I struggle to visualize an unconventional barrel of oil! It can't be done.  However, the term refers not to the product but to the extraction methods. Fracking and all that.

I was far more accurate in foreseeing the tanking of the Russian economy. I shouldn't have been since I did not foresee the collapse in oil prices. However, the dependence of the Russian economy on a single commodity, the failure to undertake structural reforms, the cost of military adventures including sanctions, all suggested a bad outcome.

With the assistance of Prime Minister Abbott, one result was a single short post that went from zero to over 5,000 page views in the space of a bit over two months, making it it the third most visited post in this blog's history. The post? Defining shirtfronting! Lot to be said for a short, sharp topical title.

Looking back over the year, there has been a lot of very silly stuff written on the Australian economy. I'ts not so much that each piece is silly, many are not, but that the pattern becomes silly. Earlier in December in Strange disconnects in the swirling world of Australian reporting and politics, I said in part:


If the commentary and reporting on the international economy is almost breathless, that on domestic economy and politics is more so.

Reserve Bank Governor Glen Steven’s statement on the reasons why the Bank had yet again kept official interest rates on hold had a more negative if still balanced tone. It’s not surprising.

The global economic scene has become more clouded, while the latest national accounts figures show that real Australian incomes are falling. Lower commodity prices are hitting government revenues, while many Australians are beginning to suffer lower real incomes. You can see this from the latest national accounts figures. The economy is still growing if at a low rate, but real incomes are falling.

Over the last two weeks, domestic reporting has become increasingly frenetic. As happened with Senator Ricky Muir’s attempt to open a motor show on the lawns of Parliament House, the press flock swarms, swoops and wheels around every new development.

I find it all quite distracting. It makes it hard to think straight. Get over it, guys. There are significant issues, but we are also dealing with a natural end boom process that Australia has seen before. Each boom is different, but the pattern does repeat.

To my mind, the distinctive feature of this end boom is the absence of major crash. I don’t expect one, just a slow and sometimes painful adjustment.

The financial press has continued to flock and swirl in the period since I stand by those words. Mind you, as I walk around Mosman studying the on-ground effects of the real estate bubble, I wonder. There will be pain, but that's the local impact.

I do not pretend to have any particular wisdom on future developments. I recognise that for many older Australians these are critical times, for the decisions they make now will affect the rest of their life and especially their retirement, present or future. My only advice to them is:
I have to go and do some mundane things. Washing calls. Avenger has come in from the garden and demands attention. He is rubbing his head up against the key board. That makes it hard to write. I have sheets in the washing to be hung out.

Well, Avenger, I accept your demands. I must go.

I'm wondering if, as times get worse, we will see a return to food gardening.

Good morning, Evan. I would like to think so, but I wonder. There is so little time now!