This Monday I really found myself out of ideas on just what to suggest as a Forum topic. 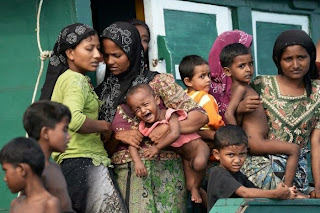 We could, I suppose have another go at Mr Abbott's views on refugees. It's hard to believe that Australians were once appalled when the Malaysian military forced Vietnamese boat people back into the water to drown. But then, we were admitting so many at the time. .

The sheer scale of the problem in the Mediterranean is hard to comprehend. At our purely local level, the militarization of Customs and the Immigration Service through Border Force, all the tough talk, is costing us quite a lot of money as well as harshening the fabric of our society.

The longer term problem for the Government is that if everybody else turns the boats around in the same way,  the flow of refugees etc to this country is likely to increase. There would come a point, and it might be sooner than we think, where the pressure would become unstoppable.

Still, we have been down this path before. Or we could talk about Parkinson's Law of Government. In my variant, as Governments can make less real difference their activities expand in areas where they might still have some control or at least where some form of political pay-off might be possible. One effect is that social control legislation explodes

But that would be jaundiced, so we might ask instead why Governments can no longer provide infrastructure in the way they did in the past. The only infrastructure now, well perhaps not the only but a lot, is that where someone can be made to pay for use.

Oh dear, I'm jaundiced again. Still, the problems with under-investment in the rail network that delivers the NSW wheat crop have been obvious for some time.

Perhaps I should stop and hand this Forum over to whatever jaundiced view you might have.

kvd suggested  that a G&T was a good solution,  He provided this link.Winton Bates suggested that "Perhaps our leaders are utilitarians who sincerely believe that they can reduce total human suffering by discouraging people from getting on boats to seek a better life".: This is the Wikipedia entry on Utilitarianism.

Are Messrs Abott and Morrison utilitarians?

Jaundice may be assisted by ingestion of plenty of fresh fruit and veg. Dunno if that's actually true, but it allows me to suggest that you should maybe think outside the square - viz:

Cheer up Jim. Monday is washing day, but Tuesday's soup :)

Perhaps our leaders are utilitarians who sincerely believe that they can reduce total human suffering by discouraging people from getting on boats to seek a better life.

To encourage conversation, I have brought you comments up in the post.I have actually meaning to write something on the growth of craft gin, while the discussion has given me an idea for tomorrow's post.

The question in my mind now is whether it is possible for a person who has been trained by Jesuits to use utilitarian arguments without being suspected of just using the most persuasive argument available.

Nationalist libertarian utilitarians. The greatest good for the greatest number of Australians, without determining any definition of good except that which polling tells them the broad sweep of the population wants, whether or not it is "good" for anyone. Each member of the population is individually responsible for making their unique contribution to the aggregate utility curve.

I suppose to be successful in modern politics it is necessary to follow the rhetorical practice of Jesuits (and Marxists) of adopting the most persuasive argument rather than to maintain a consistent philosophical position.
Thus, one day our leaders emphasise the value of the individual lives of a couple of people convicted of drug trafficking (quite rightly in my view) and then a few days later they seem to adopt the view that it is appropriate for governements to allow boat people to suffer now in order to prevent greater suffering later if a humane response encourages more people to attempt to come by boat.

Perhaps I meant popular rather than persuasive. The aim of the game is to stay in power.

That was a nice description 2T. I wonder, Winton, whether it is possible for a person who has been trained by Jesuits to be a utilitarian full stop!

You will never get total consistency in decision making, while political arguments have long focused on making a case, on staying in power. We are all quite capable of holding inconsistent ideas in our minds at the same time and indeed trying to act on them at the same time.

Members of the NLAU forget that tanners' "curve" is but a slice of a wave form - thus any good perceived or promoted will, in time, become derided, rejected, as the waveform advances.

Or, as Marconi once said: "life is not static".

Perhaps not by coincidence Neil Whitfield has a good piece on the subject of 'boat people':

containing quotes from the Abbott and the Pope. I am struck by these words from the latter: The reality of migration, given its new dimensions in our age of globalization, needs to be approached and managed in a new, equitable and effective manner - words which to me are indicative of hand wringing, but offer little by way of practical action.

The end result seems to be just to lift the level of general guilt. Is that an end in itself?

Pretty right on the wave form, kvd! That was a good piece. When dealing with a very difficult problem where you only have least bad solutions, it pays to remember principles.

Jim for some reason your throwaway about writing something on "craft gin" stuck in my head. Then just yesterday I got an email from my sister in law who is presently travelling in the UK which includes this:

Her son, Matt's friend Jesse, is just about to open a gin distillery in Sydney. Look out for PoorToms gin.

So, I go from not having heard of the idea to two unrelated mentions in one week!

Different topic - from a SMH article about home brand loyalty at major supermarkets (with my bolding):

"In the house-brand category, analysis by Morgan Stanley found Aldi's prices are 21 per cent more expensive than Woolworths' budget Homebrand range, but 27 per cent cheaper than Woolworths' mid-tier Select range.

The key lies in the four brands (not 3). Woolies own brand is cheapest. Next comes Aldi by a short head from Coles brand, then most expensive is Woolies Select (which carries unconditional money back guaranties etc). On a rough index the prices are 100, 121, 128 and 154 respectively. These don't quite match up with the percentages quoted but are close enough to work.

I think that Winton has resolved that issue.

On gin, I have noticed it burgeoning only over the last five months,an outcome of the success of craft beer.

I had a bad experience with G&T about 50 years ago, and have not been able to face it since.

Oh dear, Winton. You are right of course. I meant 2T! but that was on prices not gin. And the analysis could have come from you!