The Greek crisis - a high stakes game marked by blindness, inexperience and rigidity

Last night, I had ABC (Australian Broadcasting Corporation) News 24 on when the press conference with European Commission President Jean-Claude Juncker came on. It wasn't appearing in my twitter feed, that was full of tweets relating to the ABC Q&A program, so I started live tweeting the conference. When the ABC suddenly dropped coverage, I managed to follow along on the BBC.

Mr Junker was obviously an annoyed man. This was a pitch to the Greek people.

The BBC coverage is quite good on this one. Before going on, this EC press release will take you to the proposals as they were at the time that the Greek Government walked out having called the referendum.  I think that these are the proposals that Mr Juncker was referring too. They are difficult to interpret properly without more knowledge than I have of the current Greek system. They seem a little clunky, a  little over-prescriptive, to me.

Based on the public presentations from the two sides, it appears that the Greek Prime Minister's position is this. The EU can't afford to let Greece exit the Euro. The costs are too high. I need a no vote (no to accepting the proposals) to strengthen my negotiating hand. On the other side, a no vote means Greece's effective exit from the Euro.

Listening to the continuing feeds last night, I was reminded of two things. The first was the nearest Australian historical equivalent, the fight between the Federal and NSW State Governments during the depression over the Lang Plan. The second was the onset of the GFC where I stayed stuck to the TV in our Shanghai hotel room watching the crisis unfold..

In parallel to the evolving Greek crisis, the Chinese Government has announced measures to try to kick-start the slowing Chinese economy, while on the other side of the world, Puerto Rico is on the point of default on its $US72 billion in public debt. Meantime, stock markets are diving.

Greece has become a very high stakes game. I am not close enough to the political dynamics to understand all the possible permutations. On the surface, the lock-in effects on each side are now such that Greece will continue in economic lock-down mode until the referendum. If the vote is yes, the Tsipras Government has indicated that it will resign. Unless an alternative Government can be formed, that means new elections and further delays. If the vote is no, then everybody is going to be looking at exit strategies.

In Australian commentary, commentators have argued that China is far more important to this country. That's true at one level. But these things are interconnected. A telling sign here is the concerns expressed by the Russian Federation about the crisis. President Putin needs a weakened EU, not an EU in economic and political crisis whose flow-on economic effects affect other economies including Russia.

From a purely domestic Australian perspective, I don't have a clear idea as to what all this might mean. Clearly, it's a matter of concern to Australia's large Greek, Greek descended community. They have a very personal stake in the problem. Money is going back to Greece to support families and prayer vigils have been held. Beyond that, I have been trying to think through the flow-on effects depending on outcomes.

I hadn't expected the Tsipras Government to adopt such a high stakes approach. Looking at the IMF/ECB/EC document from a purely professional perspective and accepting that it has come about after a series of discussions, I don't think that the Tsipras Government really had clear strategic objectives, nor defined negotiating tactics. It finally devolved down to tinkering with detail. We will all suffer as a consequence.

Maybe in the few days before the referendum, Prime Minister Tsipras may set out more than what, in the end, comes down to we were robbed. I wouldn't count on it, however. 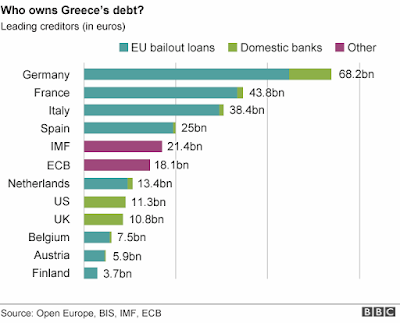 This graphic from the BBC sets out the current composition of Greek debt.
Posted by Jim Belshaw at 8:33 am

The problems that Greece (and Italy and Portugal) face are ones only partly of their own making. Germany and the other knew they already did not meet the Euro requirements when they were urged to, and did join the common currency. The same nations turned a deliberately blind eye to the spending excesses and revenue shortfalls of successive governments while selling their products into those newly opened markets.

Now they want Greece to 'take its medicine'. In short, they want to punish Greece for behaviour in which they were complicit with an austerity budget and set of measures that will beggar Greece. The Greek government already knows that it has the support of the people for a default, and Angela Merkel is being demonised in the country.

I think Greece is quite prepared to go toe-to-toe on this one. The pundits in Europe were shocked when the present government was elected and Tsirpas is far less radical than many of his colleagues. I'd certainly think a short term put option on the Euro would be worthwhile (wonder what Trader is doing).

On trader, I wonder too! But extending the discussion a little, what do you think the flow on-effects will be in a little more detail? Some of the Australian commentators have actually suggested that, relieved of Greece, the Euro will bounce. I would have thought that the complexities and write-offs would push the Euro own. I may be wrong, but I can't see the Euro itself going.

My vague understanding is that the now probable failure to make payment of a couple of Bn against a total debt of a couple of 100Bn is completely dwarfed by the size of the Greek derivatives market. It is that market which is more the problem, and yes, Trader's views upon just what might happen in that market would be very welcome.

I think Europe has a tiger by the tail, with the potential freeze up of counterparty willingness to offset any triggered derivatives default. China could clear Greece's total debt out of petty cash; but the derivatives? Not so much. And they aren't any problem to Greece per se.

You will need to amplify this, kvd. I am aware of the write-off implications on issued Greek Government debt, but not off the derivatives issue.

Jim, you need someone with more understanding than me, but I wouldn't be surprised to find that Greek-based derivatives are in excess of 2Trillion gross. Of course, Trader would say something like, well it's a zero sum game, because the other party, (and the other and the other, etc.) always 'settles' on time - by way of closeout or rewriting. That's how he would operate with his base fund of (for example) $1000 being leveraged x 100 to 200 to play the game.

But that assumes 'the other party' is able to settle or re-write, doesn't it?

I read somewhere that Germany's largest bank had gross derivatives back in January of 75T - i.e. many times German GDP - but a net exposure in the low Bns. All is good with that, until one of their counterparties doesn't actually pay up - no?

And actually, I made a mistake in that earlier post: the entire world, not just Europe, has the Greek tiger by the tail. It is not just about the debt or the debt payment now due.

Hi kvd. I simply lack the information to be able to respond. Sad admission I know!

Hi kvd: As far as I know the kind of leverage that you write about does not exist in this crisis.
There are concerns about wider economic ramifications. Will Spain and Italy be tempted to follow Greece? I doubt it unless the Greeks are rewarded in some manner that does not seem possible at the moment.
There are also concerns about geopolitics. Will the Russians replace Western Europe as a source of credit? I doubt it.

Jim, I understand there are amicable historical links between Britain and Greece. Do you know whether Brits have any influence on Greek politics these days?

Just for the record:

- sorry about the autoplay vid.

My take is that the cds default potential is averted because the players won't "let" it occur?

Hi Winton. There are indeed long historical links, but I doubt that the Brits have any special influence.

Very interesting piece, kvd. Didn't mind listening to the vid. There was a reference to something I had forgotten, game theory. The Finance Minister is an expert in this area. Mmm. Not sure that's a good thing in this case.

The piece suggests that the level of cds as such is now very low. The bigger problem lies in the size of official loans. If I interpret all this correctly, you are right that the players wont "let" default occur because of the ricochet effect on the official system, or will at least want to manage default.

Again, just for reference, this is one estimation of Greece's forward payments liabilities. Looks like this current impasse is relative chicken feed: