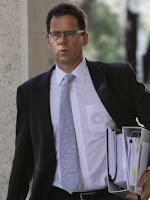 What a lot of things have been happening in that little duck pond called Australia while I have been otherwise engaged, stuck deep the Pleistocene. It was, I think, inevitable that Australian Solicitor-General Justin Gleeson would resign. As he said, the trust between the men was "irretrievably broken".

When I wrote Brandis, Gleeson and the question of independent advice, I was trying to understand the issues. I had actually never thought on the role of the Solicitor-General. Now I have. That is why, to my mind, it's not a catastrophe nor a total mess. The AG's legally binding directive will be blocked in the Senate, while we are far more aware of the issues raised.

Reading the comment threads on left and right, they were all generally politically partisan. They can be put aside. Sometimes it takes a stubborn man, even perhaps a wrong headed man, to draw issues out. What will be remembered about this affair is not the politics of it, that passes, but the articulation of the issues. Those issue will be picked over in future by lawyers and others. That is the real result.

Listed below is some of the press reaction to the continuing saga. I'm not sure that you will learn much new. Leaving aside the in-principle issues, the political problem is that it's become another major distraction for the Government with people pointing to apparent patterns.

I guess I think it shouldn't have happened in the first place - but yes, you're right, the directive will be blocked. But you're losing someone who has spent some years in the office, and who has experience as a senior lawyer. From that point of view, it seems like a pity.

I agree tt shouldn't have happened in the first place. And it is a pity.