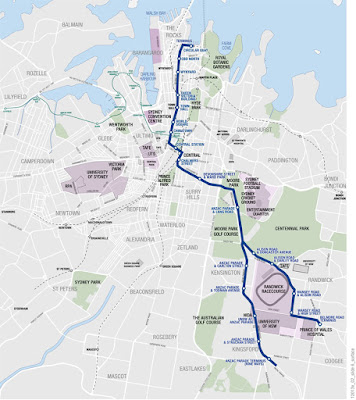 From time to time I have written about the changes that have been sweeping across Greater Sydney. These continue apace. Few parts of Sydney are immune.

The map shows the route of the City-Eastern Suburbs Light rail system presently under construction. For the moment, the main effect has been disruption  of traffic, shopping and business along its route, including the loss of the famous nine ways roundabout at Kingsford. However, even though the line will not carry its first passengers until 2019, the ripple effects are spreading into the real estate market in regard to both development and house prices.

Both Kingsford and Daceyville, the little suburb where I presently live, lie at the end of the line. In Kingsford, the median house price is now $2.29 million, the media rent $900 per week.

Daceyville prices are traditionally lower because while the suburb is heritage listed, the majority of the housing is state owned social housing with a limited supply of private properties. These are generally smaller and are often semi-detached. However, recent price indicators suggest a price range of $1.6 to $1.8 million for a two bedroom semi-detached, over $2 million for a free standing home.

The big Eastgarden shopping center at Pagewood is a fifteen minute walk south from Daceyville. Next to it, the 16.8ha site formerly occupied by British American Tobacco is being developed by Meriton. The Pagewood Green development, Meriton's largest project, will have 3000 apartments and cost an estimated $3 billion dollars.

In its the promotional material, Meriton makes great play on the developments access to green space, parks and especially golf courses. The golf courses may welcome additional members, but the parks are already very busy at weekends with sporting activities. Add a further 9,000 people in the immediate area and they are likely to be very congested indeed.

Working from home at the moment, I spend a fair bit of time walking around Daceyville just to get a break. I have come to know a lot of the locals and especially the social housing tenants since more of them tend to be home during the day. Many of them are older and have lived in the area for many years. A number are worried that development will force them to leave. I think that they have cause to be worried.

The heritage listing means that Daceyville itself cannot be turned into high rise development, at least for the foreseeable future. However, here we have a very attractive low rise suburb with lots of green space and very good access to transport. Because of the suburb's history, it was the first garden suburn developed to provide affordable housing for the working man, most if not all of the heritage properties are social housing owned by the Government. At a time when the supply of social housing is so constrained, it is hard to see the NSW Government not wishing to realise the assets to redeploy funds into areas where social housing can be provided more cheaply.

I don't see this happening in the immediate future, in part because it makes economic sense to hang onto ownership while prices around rise to capture the maximum capital gain associated with the scarcity value of the site. However, it will happen.   .

Interesting, isn't it Gordon. Puts it in perspective.