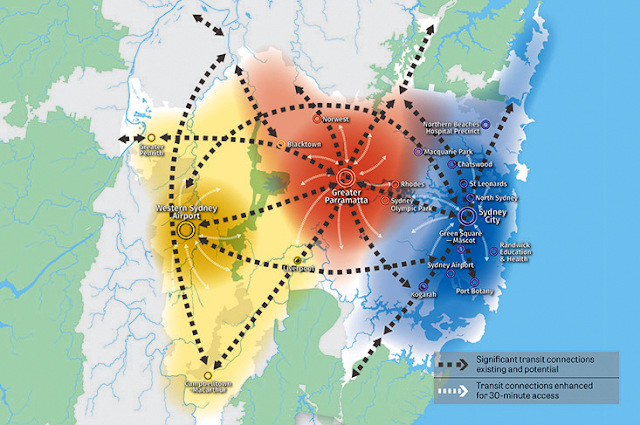 Greater Sydney with the three proposed metropolitan centres. To the north the megalopolis is merging with the growing Lake Macquarie Newcastle conurbation, to the south Wollongong, while to the south-east  the Sydney and Canberra growth spheres are increasingly entwined.  .

By its nature, Sydney is dominated by the big. Big infrastructure projects such as WestConnex or Sydney Light Rail are are required to shift people across a sprawling  megalopolis that just keeps extending its reach. Big developments are the most profitable way of  housing the growing population. Big institutions are required, or seen to be required, to deliver services in the most cost-effective fashion. Big planning is required to create, develop and maintain the three metropolitan centres seen as required for the growing megalopolis.

I have argued for many decades that we need effective decentralisation to ease population pressures on Greater Sydney and other major metropolitan centres. That remains my view, although I think that failures in Government policy and action over the last six decades means that the horse has bolted to a substantial degree. We need to focus as well on what makes cities liveable in the face of growth.

In a piece in The Conversation,  This is what our cities need to do to be truly liveable for all, Julianne Rozek and Billie Giles-Corti outlined their prescriptions for what made for liveable cities centering on walkability, public transport and public open space. They also suggested that a liveable city was greater than the sum of its parts. I don't disagree in broad terms, but I thought that the thing that the things that they missed from their analysis were people and locality.

They spoke and modelled the capital cities, and they only addressed those cities, as if they were in some ways organic wholes. They are not, or at least the bigger cities are not. They are agglomerations of different parts. People move and focus on different tracks and areas depending on their locality, work,  life style and transport availability.

Macro spatial modelling of the type provided in the Rozek/Giles-Corti piece is useful in guiding higher level policy development, but does not not of itself assist you in drilling down to more local patterns.

To illustrate, if you map the movement patterns of someone living in Sydney's Eastern Suburbs, you will find that their movements are actually quite constrained with the exact pattern depending upon residence and their stage in life.They rarely go over the Bridge, rarely go south of the airport, rarely go beyond Olympic Park. This type of pattern is replicated in other areas.

These patterns are also reflected in the customer patterns for local businesses.Some businesses are purely local, others draw traffic from wider areas. The second generally but not always depend upon the local availability of parking.

But the Eastern Suburbs itself is a large area made up many localities each with its own patterns. It is also a descriptor whose boundaries have been shifting with time, reflecting social, economic and demographic change, something that I explored in a 2008 post, Saturday Morning Musings - everchanging Sydney. That post also explored changes in adjoining areas, providing a snap shot of the changes then taking place within parts of Sydney.

All this means that you can't just say Eastern Suburbs or treat it as an entity. If you are to understand the changing texture and pattern of local life you have to drill down further, to look at localities and their changing patterns.The same conclusion holds for other parts of the Sydney  megalopolis. 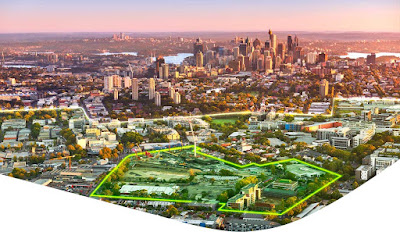 The only way to do this, to actually understand patterns, is to walk the streets and observe at different times of the day.

This is metro territory suited to those who like the density on metro living, the convenience of just popping downstairs when they need something. The human streetscape is younger, predominantly Asian in appearance. Dogs abound, crowding the limited green space. It's quite a vibrant landscape, although you don't have to walk far down adjoining streets before the people largely disappear from the street.

How all this will evolve is unclear to me. Schools are already overcrowded, while the road connections are struggling to carry the increasing traffic.There is one railway station (Green Square) on the western edge, over a kilometer from the present furthest points which tends to favour bus usage. The related developments that now extend into Rosebery with their downstairs shops are effectively separated from Victoria Park and Green Square by Epsom Road. The new Green Square town centre will be large, but I can't get a real feel at this point as to how it might actually work in dynamic terms. The descriptions seem to me to be too academic, too abstract. I can't work out what this new community will look like in twenty years' time, how the flows might work.

Green Square is one example of the change processes underway. Thursday night I went out to Homebush to watch the Australian women's and men's hockey teams play. That drive took me in part along the route I used to travel to work in 2008. Signs of WestConnex construction were in many places along the route. I hadn't actually realised what a big project it was, nor the extent to which it was creating disruption and changing local patterns. Then on Friday night I went to a belated celebration for eldest's thirtieth at Walsh Bay in the city . She was in Copenhagen on her birthday. This time it was the Sydney Light rail construction that was everywhere.

In Sydney's growth problems - light rail, Kingsford, Pagewood and Daceyville, I spoke of the changes taking place as a consequence of the light rail. Here we are again dealing with fundamental changes to local life brought about more macro policies. Change is inevitable, sometimes it can be good, but it does break down the cohesion of local life.

One of the related problems is that the perceived need to have larger local government areas for more effective service delivery is creating entities that no longer reflect their localities or indeed community of interest. This problem is especially acute where council boundaries subdivide actual or potential communities.

In  NSW Council elections: the strange case of Bayside I looked at that strange amalgam, the new Bayside LGA. If you look at the map there, you will see that Rosebery is now in Bayside. Just to the south, Green Square now lies in the City of Sydney. To the east, the expressway to the airport separates the City of Sydney from Randwick City Council. To the south east, Gardners and Bunnerong Roads separate Randwick City and Bayside Councils.

This must all be eye-glazing stuff for some one who does not know Sydney. However, my point is that community in the Sydney  megalopolis is affected by local government with its changing boundaries that actually divide local communities of interest. Further, the mechanisms for cooperation between councils appear fragmented. My own area does have an umbrella local government grouping, the Southern Sydney Regional Organisation of Councils, but this is so large that it really has little relevance to more local concerns.

Trying to amplify a little, I live in Bayside, but my daily activities take me into Randwick and Sydney City Council areas, so I am affected by three Council as well as State and Federal Government decisions.

The discussion in comments on Saturday Morning Musings - the obike challenge triggered the thought that there was a large area of flatter land covering most of Pagewood, Daceyville, Kensington, Eastlakes, Mascot, Rosebery, Alexandia and Surrey Hills that could be logical local travel bike country. There are some problems with the major drags, but it wouldn't take a lot of infrastructure work in areas such as signage and places to park bikes to make it physically possible. That would then add to the texture and civility of local life. The difficulty is, however, that it would require cooperative action from three councils plus the State Government, each with their own plans, priorities and decision making processes. I can't see that happening.


So pulling this discussion together, if we are to enhance locality, livability and the texture of life in megalopolis's such as Sydney, we have to find a better way of focusing on the smaller areas that make up the core of life which are presently neglected in the big is better institutional approach.

“This paper was undertaken in an attempt to shed light on some very mysterious problems. I fear I have done little more than show which lamps have cords too short to reach the outlets.”

Jim, I am firmly convinced this should be appended to your post :)

I really laughed, kvd. You may well be right!

Have been out to Parramatta a bit recently. First few times took the train out and was struck by the quasi-CBD feeling as it filled up in the approaching stations.

Mind you, once everyone is in their offices, the streets still feel pretty dozy through the day.

Then last two times I drove and (gasp! expense!) parked in one of the parking stations. I wouldn't do that if I was going there on a daily basis, but I had stuff to carry.

Judging by how quickly those parking stations empty in the afternoon, it can be not such a bad work/life balance out there.

btw, the the jacarandas were flowering 4 or 5 days ahead of those in the inner city (whereas in the mountains they are usually a few weeks behind).

All that's a pretty fair description, marcellous. Its very busy in peaks, but then quiet at other times. This will change as a consequence of the high rise. The biggest employers include Government, NGOs which do shut around 5. As in Sydney, a lot of people travel quite long distances. Interesting on the jacarandas. Its actually a more inland climate. Much hotter during the day, colder at night.