I have been travelling, returning to past haunts. I had been very busy. Well, perhaps busy is not the right word, for I have been distracted rather than productive. The journey gave me a chance to reflect without the constant chatter of the internet world. 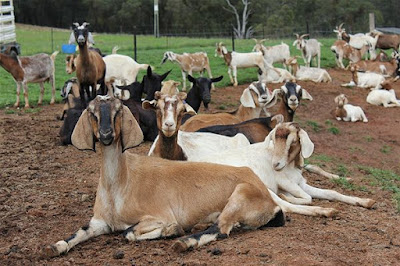 I had been meaning to call in for many years, but things never worked out. They were always shut to the public, or so it seemed. The reality proved to be a little different.

I had thought of New England Cheese as one of those craft operations, places that people ran for interest and as it suited them. An amateur aspirational place focused on life style and a desire for a natural product. As I was to find out, New England Cheese is partly that, but it is also so much more.

I had checked opening hours and thought that it might be open, but it had been closed on all my previous trips. Stopping for a cigarette and a pit stop at the little reserve outside the Nowendoc Hall. I spoke once there for a women's gathering. Later, it was the police headquarters for the police search for wanted criminal Malcolm Naden,  Reflecting, I decided that I would call in if it was open even though we were running a little late. 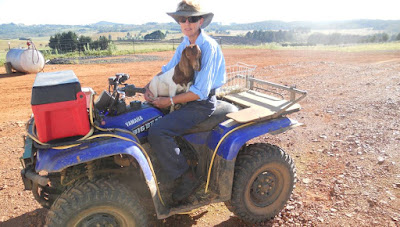 The closed sign was not on the gate so I drove up the winding road to the farm buildings. There was an old red cattle dog lying in a basket outside the front door who growled gently at us. I wasn't sure that the place was open, but pressed forward. There we found Lia Christensen, a tall, good looking and very fit woman. She needed to be, for reasons I will explain a little later.

There was a customer already present, a chap who had grown up on an apple orchard outside Armidale. We swapped notes about  fruit thinning and life on an orchard while Lia pressed samples on us, always saying you don't have to buy, but I want you to try.

"I have to close soon", Lia said. "Do you want to help me pack 400 boxes of yogurt?"  At this point, the full story of New England Cheese emerged.

Lia and husband John had been dairy farmers in Victoria and decided to retire. They were looking for a place to retire where they could also pursue their interests in dairy and cheese and so bought a small block at Nowendoc. However, the concept of semi-retirement proved to be just that, a concept. The business took off.

There are a number of parts to the New England Cheese business. There is the small herd of goats and sheep from which the specialty cheese is prepared. There are the milking facilities. You can't milk sheep and goats in the same way as cows. There are the cheese making facilities. Then they buy in milk from Gloucester down the mountain to make specialty yogurt and cheese. This is not a small business, for New England Cheese supplies Harris Farm home brand milk, yogurt and cheese that is just the same as it sells through the shop door. It's very nice.. 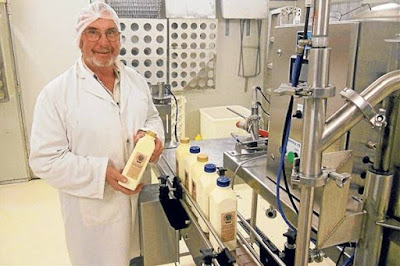 Quality control is central. This photo shows John in the milk processing facility.

In all this, there is a rub. New England Cheese can't get staff. Back in 2013, John complained about the difficulty of getting qualified cheese making staff.

It's not just qualified staff. New England Cheese can't get staff to do basic stuff because Nowendoc is now seen as just too remote. Modern Australians won't move to the country even if there is work, decent pay and accommodation available when they have none of this where they are.

This throws a major load back on the Christensens. While John drives the refrigerated truck on the regular deliveries to the Harris Farm warehouse at Flemington, Lia packs. Talking to us, she raised her arms and flexed her muscles! When, last year, Lia broke her leg in a farm accident, they had to stop production of sheep milk cheese for twelve months because there was no one else to help.

I would like to have stayed to help Lia with those 400 cartons. I would have learned a fair bit. But I had to move on. Perhaps I might go back?

On this National Agriculture Day, I think that it is worth reflecting on the way that the texture of urban life and food depends on businesses like New England Cheese.