From time to time, I have written about the Pacific Belshaws, my own little family. Now I report the death of my cousin Cyril Belshaw on 20 November 2018. The Canadian family released this short statement that was carried in the Globe and Mail on 1 December 2018. 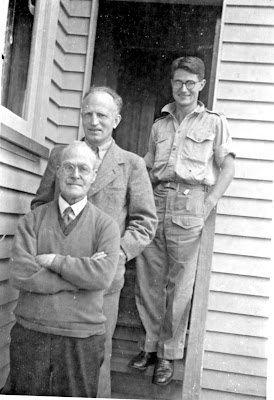 We are saddened to share the news of Cyril's death just before his 97th birthday. He was a kind and generous man who taught his family to celebrate diversity and adventure, kindness and shared joy. He delighted in good food, travel, politics, gardening, music and his great passion, tennis. He will be mourned by daughter Diana, partner Thomas; granddaughter Eleanor, Liam and their son Arthur Cyril; son Adrian, partner Loreen; granddaughter Juniper, partner Jess; by his extended family Claudia and Kevin and friends around the world.

Cyril was a colonial administrator and economist in the South Pacific before completing his PhD in social anthropology at the London School of Economics. During extensive field work in New Guinea, Fiji and Northern BC, he was supported, as in life, by his wife, Betty. His appointment to the Department of Anthropology and Sociology at UBC began a long career as an international academic, observer, and writer. 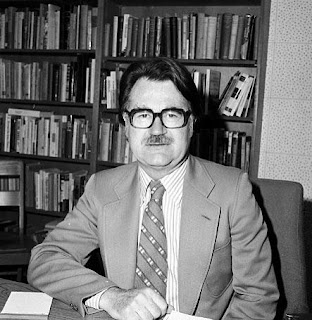 Cyril in his study, University of British Columbia

He continued a family tradition of service as a founding member of CUSO, as Director of a Regional Training Centre for UN Fellows in Vancouver, and with UNESCO, the UN Bureau of Social Affairs, and the International Social Science Council. He served as President of the International Union of Anthropological and Ethnological Sciences, as editor of Current Anthropology, was an Honorary Life Member of the Royal Anthropological Institute and a Fellow of the Royal Society of Canada.

Cyril was an unrepentant thinker and writer. His publications ranged from academic studies (The Indians of British Columbia, Under the Ivi Tree, Changing Melanesia) to philosophical and political analyses of the world around him (Anatomy of a University, Towers Besieged: The Dilemma of the Creative University, The Sorcerer's Apprentice: An Anthropology of Public Policy) .

Towards the end of his life, Cyril imagined a better world for his granddaughters and their children in Creating Our Destiny, based on the essay with which he won the Utopian World Championship in 2005.

There will be no memorial service as Cyril asked to be remembered around a dinner table with good friends, excellent food and a glass of wine. Donations in his memory may be made to Doctors Without Borders, the UNHCR (United Nations Refugee Agency) or organisations that support the homeless."

The Wenner-Gren Foundation which, (among other things) publishes Current Anthropology, provided this tribute on its web site:

On November 20, 2018, Dr. Cyril S. Belshaw, the second editor of Current Anthropology, the Wenner-Gren Foundation’s flagship journal, passed away in Vancouver, Canada.   He guided Current Anthropology through a formative phase in its growth, taking over from the founder, Sol Tax, in 1974.  Known for his extensive research in New Guinea, Fiji, and British Columbia, Dr. Belshaw wrote for broad audiences on topics ranging from urbanism in Papua to the future of the Canadian university.   An avid promotor of global dialogue in anthropology, he served as President of the International Union of Anthropological and Ethnological Sciences and was an honorary lifetime member of Royal Anthropological Institute, the Pacific Science Association and the Association for the Social Anthropology of Oceania.  The Foundation is grateful for his service to the discipline. We extend our condolences to his friends and family on their loss."

I was only five or so when I first met Cyril. I must confirm exact dates when he, Betty and then baby Diana came to stay with us in Armidale. Despite the big age gap, Cyril and I are first cousins. Then came a long gap until we met again in Canberra when he was on an official visit

Despite that lack of direct contact, the information flows within the small extended Belshaw family, a small family in total and spread across countries, kept people in touch. When I came to do my history honours thesis in 1966, I chose to do it on the economic structure of traditional Aboriginal life in Northern NSW. I also chose to apply models and concepts from economics, consciously siding with Cyril in an earlier dispute he had had with Karl Polanyi over the relevance of economics to non-money using societies. 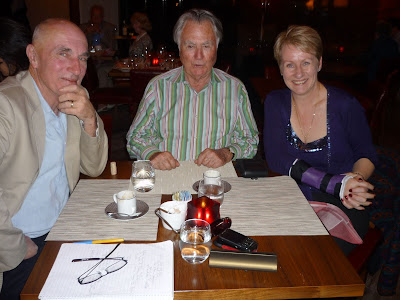 After that lunch in Canberra came another long gap. In 2009, Denise had to attend an international insolvency  conference in Vancouver,  I went with her as handbag and was able to spend a fair bit of the week with Cyril.

Cyril and I had been in contact a fair bit by email. Now we talked in more detail as I guided him around. Cyril was almost totally blind, he used a big screen, magnified text and a magnifying glass to see the screen. Yet despite that, he was still writing.

I promised Cyril that I would write the story of the Pacific Belshaws. Like him, I thought that it would make a good yarn, how a family from the pits and mills of  Lancashire came over two generations to to be something of an intellectual and academic dynasty spanning four Pacific countries. I was cautious about some aspects of our family story, I thought that it might open wounds, but Cyril was determined that it should be all told.

I have made some progress on the task, although it's not my top writing priority. As I researched, I realised how much interests and values has passed down the small number of generations. We don't always see it, but it's there in a very pronounced fashion.

I will finish that book. In the meantime, this post is a small memorial for my cousin.
Posted by Jim Belshaw at 11:30 pm

Seems a full life, with many useful accomplishments. Respect for your family's loss Jim.

Please do open the old wounds so to speak. Many in Vancouver in the University area wanted justice for Betty.

Hi Anon. It's difficult. We are only a small family spread across three countries. While the family believed that Cyril was innocent, Betty's death was a very traumatic event, especially for her children and Betty's family. Cyril was happy to have the matter open and discussed but I quickly received feedback that to do so would reignite the trauma among children, grandchildren and now great grand kids. Given the dreadful impact of the death I paused. Among other things, our small family has reunited in recent years.

While Betty was a link with Canada, she and Cyril and a baby Diana stayed with us for Christmas one year in Armidale and Betty sent brother David and I Christmas presents for a number of years, the families had drifted apart. Now the small Australian, New Zealand and Canadian families are back in contact. I love and am proud of my Canadian cousins (there are so few of us that we think of everyone as cousin: Cyril was my first cousin) and do not want to recreate pain.

I still want to write something because the story of the Pacific Belshaws is a remarkable one, but I will have to tread very carefully.