I am sitting here listening to Debussy. I like classical music; it's soothing.

I have had several goes, well more than that actually, in writing a post, posts. But time has been limited, other pressures more important. kvd once said that I could (would) write under wet cement. I fear that's not true. 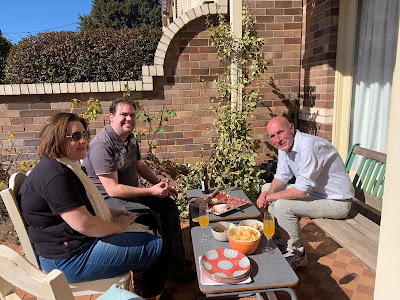 Lunch in the sun, Armidale, with Rod and Becky Holland. Tobias inside watching TV. Armidale was cold, up to -5 at night, but out of the wind in the sun it was very warm during the day.

The photo was taken a few weeks' back. I was in Armidale looking at houses. It will be no secret that I have been thinking of moving, I have been for some time, but now the move is actually taking place and in the near term.

Because of my continued involvement with Armidale and the broader New England, people still equate me with the area. Indeed, some people including locals think I still live there! It's just that they haven't seen me down town recently. However, the reality is, to use a politician's phrase equivalent to the facts are, I left Armidale early in 1996, so haven't lived there for some 23 years.

The world changes. Many years ago Rosalba Gustin, a friend in Canberra, lent me a book on English expatriates living in Italy.They had fallen in love with the place, but in the end found that they did not belong there or in a changed English homeland. I have never forgotten the key message of that book. The Armidale I knew no longer exist beyond people's memories. .

I have been working hard over the last few years digging back in while recognising that I won't know the real texture of life until I get there. I should write about that at some point as a case study, For the moment, I just note that people have been kind and welcoming. I don't expect to be lonely, something that has occurred in Sydney.

Sydney's a funny place. I am fond of the city, I have known it for a long time. But it's also a place where you need money and structure, money because of distance and costs including entry fees, structure because so much of life resolves around the phases of life such as family, immediate friends and work. 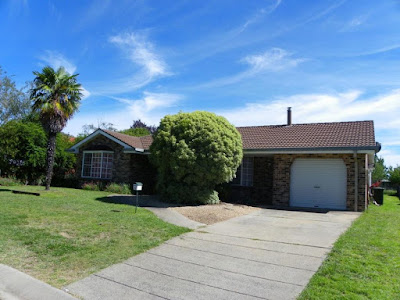 I now have a house in Armidale. It's further out than I would like, very near the uni when I wanted something within easy walking distance of the CBD, but it's better than what I have now and $215 less per week than I am paying now.

Some of my friends remarked on its apparent size. It's actually smaller than it looks, but in any case it's big enough for me to have family and friends stay and to store my much loved books. and papers while I continue to sort. It has space for me to have friends round, I have really missed this recently, and a  small but adequate garden bed for a kitchen garden including herbs.

I haven't moved yet. I am going though the painful process of trying to sort. There is so much stuff! I also want to get back to Queanbeyan either before i move or soon after.

In all this, while I have tried to maintain my writing the process has become harder and harder when I am trying to manage basic change. There is some writing I must do including the columns, but otherwise I am stopping. I may find some time for more columns here. but if not you will hear from me after I am settled.

New place looks good. You can always keep an eye out for something closer in further down the track - maybe after you've downsized your possessions a bit more. (Do as I say; not as I do!)

Meanwhile on another topic, there is a decision on the Banerji case: https://www.theguardian.com/australia-news/2019/aug/07/high-court-rules-public-servants-can-be-sacked-for-political-social-media-posts.

Providing the fencing goes right round, I see lotsa room for some chooks out back?

@marcellous yes, a more than interesting decision - particularly the dismissal of the anonymity defence for social media comments. I see far wider ramifications than just this specific circumstance - and would be very interested in your further (anonymous of course :) thoughts.

In the spirit of Chesterbelloc, with a touch of Jeckyll and Hyde, I've decided to float the hypothesis that there is one person called Gerald Henderson or Gerard Murnane. The same accumulation of detail which starts off being interesting and ends up being more than one can bear.

Ha! Perhaps reading it as Harry Potter and Invisible Yet Enduring Lilacs might give it the gravitas you seek marcellous :)

Meanwhile, back to any thoughts on the false anonymity of social media...

Evening, chaps. The Opinions on High blog has a very good summary of the Banerji matter - https://blogs.unimelb.edu.au/opinionsonhigh/2019/08/09/banerji-case-page/#more-8539. I must admit to being a bit old fashioned here, and I speak as someone who was involved in party politics while a public servant.

A minister has to be able to trust his advisers not to reveal confidential discussions or to use or be perceived to use information obtained through the job to attack the minister or government policy. This imposes limitations on freedom. The issue then becomes where to draw a dividing line between those principles and other principles. Particular issues arise where the public servant is commenting on policy and programs that fall within their portfolio, especially where those comments attack policies. The policies or programs may be worthy of attack. If that is your view and you cannot serve honestly, then you should consider resignation or seek to leave the area in question.

I think that Ms Banerji's conduct was especially problematic because she was relying on anonymity in making her comments. That, it seems to me, is dishonest. Am I too much a purist?