Fire and drought on the New England

It’s very dry in Armidale. Sitting outside at the back table I look across an expanse of dead grass stretching to Queen Elizabeth Drive, the main drag to the University. Fortunately, it’s been close mowed. Otherwise I would be worried about fire hazard. 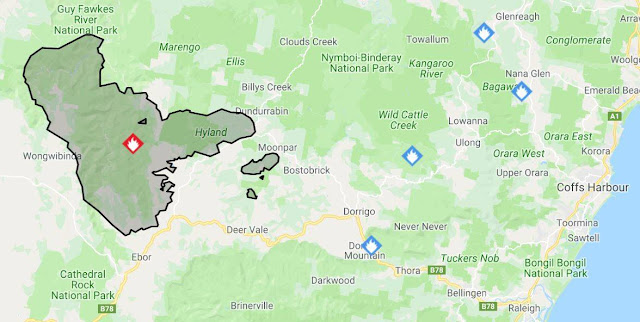 The fires at Bees Nest and at Tenterfield and Stanthorpe have attracted much attention. The Bees Nest fire has now burned over 90,000 hectares, so it’s a very big fire. News reports describe it as near Armidale. In fact, it’s some considerable distance away, north of Ebor, north-west of Dorrigo. A camp for firefighters has been established at the Dorrigo Polocrosse grounds.

Fire fighting efforts have been hindered by lack of water. In some cases, limited town supplies have had to be diverted to fire fighting. Armidale itself is relatively fortunate, although level 4 water restrictions have been imposed. The main dam, Malpas on the Gara River is 42.9% full, while the much smaller Puddledock and Dumaresq dams are at 70.7% and 58.6% respectively. Puddledock is reserved for emergency use including fire fighting. Malpas now supplies Guyra as well as Armidale. Guyra’s own dams also on the Gara River are very low.

The streams in this immediate area including Gara flow east and have generally wetter catchments than the westerly flowing streams that form part of the Northern Darling Basin. Rainfall declines across the Tablelands from east to west. While it’s dry on the eastern portion of the Tablelands, it’s even drier in the west.

While I accept the statistics that suggest that this may be a record dry spell, I struggle a little with some of the hyperbole, mainly because I have seen so many droughts. Certainly it is very dry and will remain so until we get decent rain.