Boomer Alert: reflections on civility and the maintenance of friendships in a polarised community 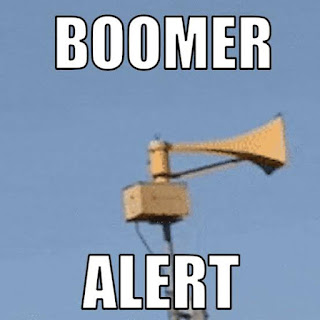 I suppose that it had to happen.

In discussion in another place, a commenter remarked Ok Boomer accompanied by the Boomer Alert Gif. I actually felt vaguely flattered and responded with a smile and an anodyne comment.

I will leave aside the detail of the exchange beyond noting that I was not challenging either her values or the importance of the issues she raised. Rather, I was suggesting that in this case her conclusions ignored the evidence. Perhaps more precisely, she had raised two important issues that deserved investigation but then linked it to a third. I was challenging the linkage. I also note that she was actually very polite in her substantive responses!

One thing I have noticed in coming back to Armidale, it's something that I was already aware of, is the need to exercise discretion in what I say. I have spoken before about polarisation in attitudes across social media.

When you mix with people whose views you share then it's easy to be frank, even extreme. However, my friends and contacts span opinions, something that I value and wish to maintain. I have already diminished friendships by forgetting others' views and then speaking openly, conversationally, on particular topics. I do not wish to compound this problem, a problem accentuated by my dratted habit of wishing to test views. Socrates has a lot to answer for! I have to remember where people are expressing deeply held opinions, values, that I need to listen, to clarify,  but respect their views.

But what do you do when you deeply disagree? How then do you respond? Do you simply shut up?

Often, I think that you have to or at least respond gently. It depends upon the context of the conversation. If you are to challenge, then you have to make a judgement as to whether any thing you say will have any meaning or impact.

Some of my friends are anti-vaxxers. I think those views are usually silly, even dangerous. Samoa is a case in point. Here I just listen, but do try to chip away at the margin. That's in personal conversation. I reserve the right to  analyse and comment in other fora such as my blogs where I believe that may have some impact.

Others of my friends and family are participating in the climate change protests. I agree that this is an important issue. However, it is not clear to me that their protests make sense in that the focus is on the need for action without paying real attention to what action means. I know that youngest and others would respond that the important issue is to force the governments to explicitly recognise and respond to the crisis. I respect that, but it does not allay my concerns.

In a way, discussions around climate change and associated energy policy have become the Australian equivalent of Brexit, a wicked issue that creates uncertainty and divides without a clear path forward. To my mind, we are paying a terrible price for Mr Abbott's and, to a lesser extent the Greens, ideological obsessions.  Had Australia adopted a carbon price, the level is a separate question, then the heat would have been taken out of some elements of the current discussion.

I will come back to this one later because I want to review some of the things I said several years ago when I was trying to work my way through the issues. For the moment, it is another of those questions I'm cautious about in private discussions, in part because so many issues have become entangled.

This is not meant to be a negative post, simply a reflection on the need to manage or avoid certain topics if you wish to maintain a broad contact/friendship network, to encourage civility in discussion.

Haha - so then you bent over backwards, and accepted her insult ("ok boomer") so as to maintain some sort of "civil" relationship with... what?

Sometimes people are actually wrong, and sometimes the king really has no clothes, and sometimes it is hard to answer the question "how many fingers am I holding up".

Depends what you value, I guess. I've never valued going along to get along - but then my home has mirrors, which I'm forced to contemplate every.single.day.

Anyway, more sober thought on my part is to suggest you could have indicated your desire for civility by simply replying with an "ok" emoji. Oh no - wait...

Something is seriously wrong with these numbers reported 12 December 2019 here:

- and that is on the low side of media claims???

Sorry for the delay in responding, kvd. Oh no - wait...indeed.

On the pigs, that FAO report was quite interesting. It's been update since with the next report due on 19 December.

I see the numbers problem. I have no idea, of course. The map shows patchy reported outbreaks with some parts of the country untouched. However, the Chinese response reported in the latest report suggests that it is a very serious problem. It's a very Chinese response, mind you. There is a difference I suppose between culled and deaths. We don't know what proportion of the pig population died prior to cull.