Trump, fear, hate, love and the need for objectivity in US politics 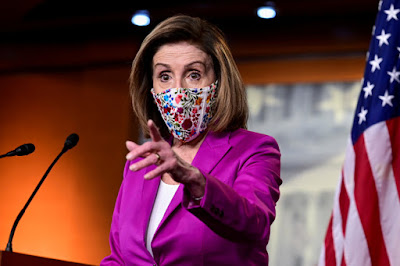 Nancy Pelosi. To my mind, she has become part of the US problem, impeding a US solution.

Like many Australians, I watched events unfold at the US Capitol Building with a degree of distress. Like many Australians, I felt that President Trump had gone totally off the rails. All that said, I think that the Democratic Party is in danger of doing the same. that many who oppose President Trump and his objections are doing so blindly, allowing emotion to overcome objective analysis and that we will all be poorer as a consequence.

Some 75 million Americans voted for President Trump. He has used his marketing skills and showmanship, his understanding of the many Americans who feel disenfranchised, to develop a loyal supporter base that spans from decent Republicans through independents and even Democrats, to right wing conspiracy theorists. As many have pointed out, President Trump is a symbol of a divided America, an America in which many feel betrayed by the American system.

Alone in his White House bunker with encircling enemies, President Trump lost all sense of tactics, let alone strategy. He kept trying to pull the levers of power even though they were becoming increasingly disconnected, even as his closest aides were distancing themselves. As recently as four weeks ago I thought that he had a path through not to retention of the presidency but to retention of influence and protection of his commercial assets. It was not a path I would have chosen, but as an analyst I could see ways in which it might work.

His remarks and consequent Capitol riots have destroyed that path. It left a country further divided, fearful.The key need in these circumstances was unification, the calming of emotions. Instead, President Trump's opponents have resorted to emotional language driven by payback and a get Trump mentality playing on the fear of what right wing fringe groups might do that has further divided the nation.

One common thread in all this is that Trump brought US democracy and the US system of government to its knees. I have a very different view, This episode has actually demonstrated the strength of US democracy. President Trump used every one of the diminishing levers at his disposal to try to overturn the results and failed.

The move by Nancy Pelosi and the Democrats to try to impeach the President strikes me as very unwise. The previous attempt failed and was early recognised as certain to fail. In that sense, it was a symbolic gesture whose political purpose was to wound the President. It failed there too.

Now in the last eight days of the Trump presidency, we have another Pelosi political gesture in impeachment which adds to the theatre of it all but whose practical results are quite uncertain.  It does play to the Democratic political base, but equally it plays to the underlying Trump narrative that everybody is out to get him, that he and his supporters are being robbed. In doing so, it does increase the risk that some Trump supporters may take matters into their own hands.

For the moment in all this I am just keeping my fingers crossed that we get through to the Biden administration with minimum trouble. Then we can look at new things.

Cromwell's body was exhumed from Westminster Abbey on 30 January 1661, and was subjected to a posthumous execution.

His body was hanged in chains at Tyburn, London, and then thrown into a pit. His head was cut off and displayed on a pole outside Westminster Hall until 1685.

On the first, growing up I was more attracted to the Cavaliers rather than the sombre and more ideological Round Heads. One of my favourite books as a child was The Children of a New Forest. https://en.wikipedia.org/wiki/The_Children_of_the_New_Forest

It's quite possible to retain conflicting views! I remain attracted to Bonny Prince Charlie as a romantic figure, shuddered while visiting the Culloden site, but objectively think it better that he lost. In the case of both the English Civil War and the Scottish attempts to reinstate the Stuarts, I was struck by the savagery of the victors. I fear that I will never make a good ideological warrior!

I hadn't heard of Kathy Griffith and had to look her up. I am sadly out of touch with current popular culture, something that comes through when I try to answer questions on current quiz programs! Now that I have, I fear that I will let her go through to the keeper.