Saturday Morning Musings - the Facebook imbroglio. What does it really mean? 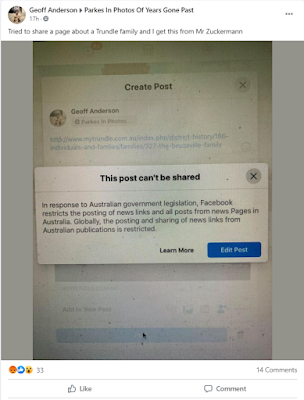 I had to smile. I was lined up at the checkout when the nice lass in charge pointed out that someone was trying to talk to me. Deeply absorbed in my own thoughts, I was oblivious to this.

We met outside for a chat. My friend reported a conversation at a local function where someone had remarked that a group that I was involved with had been reduced to a few malcontents! I had to laugh. True, by December last year the active membership had dropped to a very small number of increasingly ancient people. Since then we have restructured the committee and have created a Facebook support group with 113 members. That's not huge, but it's still good progress for two months.

I am reasonably expert in social media and use Facebook in particular as a platform to achieve specific objectives. The interconnected groups, pages that I am involved with give me a reach now over 10,000 people. That's not huge, my present interests are specialised in terms of both locality and content, but it's far more than I could reach through the conventional media even when papers were still being printed.

All this means that I have a very particular interest in the current dispute with Facebook. However, that interest is affected by my local experiences since returning to Armidale. As a policy adviser I have have always argued that good policy depends upon movement between the macro, the overall objectives and principles, and the micro,

I live in an electronic world as do most if not all of those making or advising on policy. That's an example of the macro. But what about those who do not? Here I have been surprised since returning to Armidale at the number of especially older Australians who do not. To illustrate.

The Armidale & District Historical Society has several hundred members. Around half do not have email. In the history course I have been running a small but significant proportion do not have email or internet access. A much bigger proportion do not access Facebook. In many cases, this is a matter of choice not money. However, there are also large groups of poorer Australians especially in regional areas who cannot afford the kit required.

The cessation of the print editions of many of the print edition of papers including free papers such as the Armidale Express Extra has effectively cut these people out of the news system outside TV and radio. I see the practical effects because I appeal to an older demographic. I have lost count of the number of people who have said to me that they miss my columns, while the direct feedback that I used to get after individual columns has largely vanished. When I say to people that the columns are generally still on-line, they respond that they don't use the internet or, if they do, they are not prepared to subscribe to the on-line paper or if they do that they either don't bother or can't find the columns. A problem here is that the columns that once appeared for free every Wednesday, a known, now appear at different dates and are tagged in different ways.

A broader problem lies in the growing dependence of on-line for processing without proper alternatives. There was a simple practical example during the week. Access to a particular facility requires on-line application. You also need to do a covid checklist that can only be done on-line. This blocked out an older Australian working on a specific project. There is apparently no provision under current rules to accommodate someone who does not have internet access or skills. I think that we can do something about this, but it is an example of a problem.

I mention all this because it explains my somewhat complicated reactions to the current dispute between Facebook and the Australian Government.

Following Facebook's blocking decision., all the Australian Community Media (ACM) mastheads carried this type of message:  Facebook news ban prompts ACM to ask Australians to delete the app. The message was reinforced via my email feeds from ACM itself and from some of individual newspapers. I had a very dusty reaction indeed,

I would be the first to admit that Facebook has overplayed its hand. Far to many people have received message such as the above. Far to many non-news sites were blocked.  There was no discrimination between smaller independent local news sites such as the Clarence Valley Independent. their Facebook site now shows this message, and the bigger chains. Mr Zuckerberg is playing a big end of town game, but so is ACM and indeed the Federal Government itself.

I am not a typical news consumer. If I were asked if I use Facebook to access news I would answer yes, but its not accessing news in the conventional sense.

I use multiple media sources (radio, TV, media web sites, twitter, blogs among others) to access news. So far as Facebook is concerned, I do follow feeds from multiple media organisations, but with rare exceptions they simply indicate to me what is being covered. Exceptions include some of the immediate on-line TV coverage and small independents such as the Clarence Valley Independent where I have used Facebook as my main entry point. Now I have simply bookmarked its home page and will go direct so long as the current trouble lasts. For most of the newspaper feeds and especially ACM I do not click through because it immediately brings me up against a paywall.

Where Facebook does come into its own as a news source lies in particular types of news where media coverage is often slow, non-existent or only to be found behind paywalls. This includes feeds from particular institutions where I have an interest and from local organisations and groups. Here the Facebook platform is actually filling a gap left open, even created, by the traditional media as their coverage becomes more restricted. But "news" in a conventional sense is peripheral to the main ways people such as me use Facebook.

One test of a policy is to ask what will happen if it's implemented. At a purely micro level ,I would not expect it to have a  significant effect on the news that I can access. Yes, some of the bigger media groups may receive some funds that will allow them to expand journalism, but I struggle to see how this can have other than a marginal effect.

Feel free to correct me!

I have wandered a little in this post. Google raises somewhat different issues, but in both cases control over advertising is the underlying critical issue. I think that this is also being addressed by another ACCC inquiry, but it's complicated making for slow progress.

Excellent, Jim. One aspect -- purely personal -- I tried to capture in this response on Facebook to Matt da Silva announcing he was virtually leaving: "I will stick with it as it is actually its original purpose as a social network that is its main function for me. So many relatives, including some I would never have known otherwise, ex-colleagues and ex-students are there in my friend list!"

To that end too my Facebook (unlike my blog or Twitter) is closed to all but the friends and relatives who have "friended" me. I never saw it as a way of changing the world.

You are right to stress the value groups can have, bringing together communities around some project or common interest.

It is interesting that the commentary sees both sides as being evil in one way or another. Your somewhat complicated reactions are appropriate.