Reflections on the death of Prince Philip 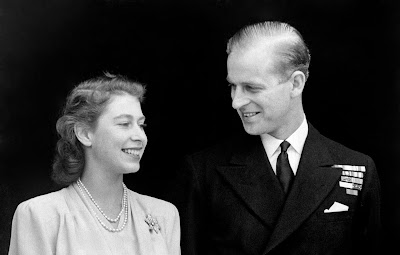 The death of Prince Philip affected me more than I had expected, in part because it marked the end of not just one but several eras.
Prince Phillip has been part of my whole life. I don't remember his marriage to Elizabeth, I was too young, although in that immediate post war period our family homes were filled with World War Two memorabilia including multiple things on the Royal Family in the war.
I do remember the 1953 Royal Visit to Australia. It was such a big deal. I did not see the Royal couple on the visit. However, there was massive news real coverage and a special feature film that I watched at the local picture theatre. From there, there were multiple visits.
The Duke of Edinburgh Awards scheme reached Australia in 1959, becoming a key conduit between the Duke and Australia, giving the Duke a a local presence independent of the Queen. In the second half of the sixties, links were established between my old school, The Armidale School (TAS), and Gordonstoun, links that continue to this day.
TAS was an early participant in the Duke of Edinburgh awards, began a student exchange program with Gordonstoun  became a member of the Round Square school group. The strong links were established when a TAS teacher visited Gordonstoun on an exchange program. Among other things, he involved Prince Edward with drama, creating another link that continues to this day. 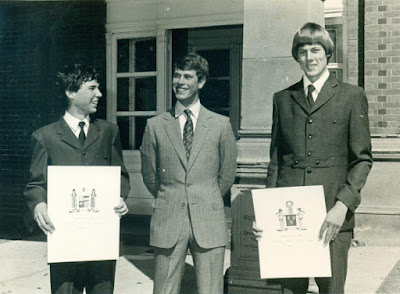 1983. Private visit by Prince Edward to TAS. While there he presented badges to the new day boy houses. Inaugural Green House captain Samuel Blanch on the left, Robert Kirwood, first captain of Ross right. The photo is a bit of a classic!
My own views on the Duke have fluctuated over time. Initially, I thought of him simply as the Queen's husband. Later, I thought of him as something of an old-fuddy duddy prone to gaffes and support for old fashioned causes.
I suppose that there is a certain irony here for some of the causes supported by the Duke and Prince Charles such as conservation and organic farming have become very mainstream indeed.
I was also not a supporter of some of the ethos espoused by Gordonstoun and adopted by Prince Phillip. I dislike regimentation and indeed cold water! Later still, the Duke became just a familiar figure, someone I did not know, we never met, but somehow knew.
When I started this post, my intention was to set Prince Phillip in an historical context, to use him as a window into history. I have wandered. However, I do want to make one final point.
The obituaries have focused on his sense of duty. Today, the idea of duty has become legalised expressed in terms such as duty of care. The old fashioned idea of duty as personal responsibility, responsibility for role independent of forced obligation, seems somehow old fashioned.
I think that's a pity. Perhaps Phillip's death may remind us again of duty in the old fashioned sense.

Lovely post Jim. Read it directly after musing my way through a picture montage of his life and times, so it was appropriate that yours was the next port of call in my reading, and I thank you.

And your final point about what "duty" used to mean, in the wider sense, is exactly correct.