Australia and its People - a funny upside down land 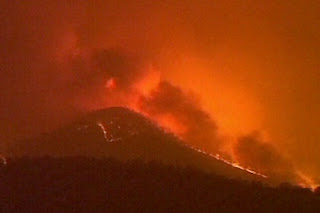 On Saturday night Clare (youngest) had some friends over for a sleep over. I was talking to one of boys who is just completing first year university, talking about the features that gave Australia such a distinct culture. He couldn't see it, arguing that we were too young a country to have our own distinct culture.

He then went on to talk about an overseas trip he had just been on, in so doing actually making my point for me, because his insouciant attitudes to his travel was itself very Australian. Despite all the efforts of our political leaders to get us to do otherwise, we still do not take ourselves very seriously. On the other hand, we are nearly always prepared to muck in to fix things up if that is needed.

As I write, bushfires have cut the road and rail connections between Sydney, the Central Coast and Newcastle. This comes on top of a series of fires in all Australia's eastern states, some of the biggest fires on record.

Our political leaders are engaged in a spat over water and the need to drought proof the country, while the small New England town of Wallabadah has suddenly had its well run dry requiring the local Council to cart water for domestic use. At the same time, parts of Central and South Australia previously in drought have just had some of the biggest rainfalls on record. So contradictions abound.

Like all people, Australians have been formed by the geography of the world in which they live.

The Australian poet Dorothea McKellar begins her poem "I Love a Sunburned Country" this way.

The love of field and coppice, of green and shaded lanes

Of ordered woods and gardens is running in your veins.

I know but cannot share it, my love is otherwise.

Unlike the Australian Aborigines whose view of the Australian landscape had been formed over perhaps a thousand generations, the first Europeans found the landscape strange, alien, different.

The bright light in particular was very different, as was the smell. Many sea travellers commented on the second because they could smell the land some distance out to sea. Modern Australians say very similar things, although now the smell is caught outside the air terminal.

We can see this in some of the first European painters who presented the Australian landscape either in grandiose forms or, alternatively as in the case of John Glover (Aborigines at Brighton), somehow fitted it to English forms. 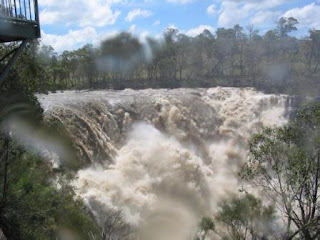 The second verse of the poem, one of the best known Australian verses, presents a different view.

I love a sunburnt country, a land of sweeping plains,

Of ragged mountain ranges, of droughts and flooding rains.

Her beauty and her terror- the wide brown land for me!

By now the European Australian had internalised the landscape as theirs. This happened early with the currency lads and lasses, the first European children born in Australia, much later with the overseas born.

But while the landscape had been internalised for most Australian born, it was not until the last part of the nineteenth century that both art and literature provided iconic representation of the new forms that had emerged. These retain remarkable power even in today's now highly urbanised coastal hugging community.

I have written before about the Australian volunteer spirit, a post triggered by similar events.

In small dispersed communities dispersed across a sometimes harsh landscape, people needed to meet crises together to survive. They had to be collectivist and cooperative.

One of the motifs of Australia from early days has been the lost child, a motif expressed in painting, writing and song. This remains a recurring Australian fear. So the gathering of people to find a lost child remains a potent symbol. Here the story of four year old Stephen Wall somehow captures the Australian experience.

In 1960 four year old Stephen went missing in the bush near the New England town of Guyra. Over the next four days a huge search was mounted ultimately involving 5,000 volunteers and multiple aircraft.

Stephen was finally found over 12 kilometres from the start point when an Aboriginal tracker - Aboriginal trackers played major roles in many early searches - realised that the boy was actually doubling back to avoid search parties. Stephen, who had been told to avoid strangers (an early example of what we now call stranger danger), had never seen so many people in his life and was simply following his parent's instructions! Upon discovery, the boy's first words were "Where's my daddy".

Stephen's story captured the national imagination. Johnny Ashcroft's song "Little Boy Lost" went to the top of the charts, while a film was also made directed by Terry Bourke.

The continuing scale of the Australian volunteer effort is insufficiently recognised even by Australians.

We can see it and recognise it when we have something like the current Victorian bushfires where something like 10,000 volunteers have been involved in fighting the fires, some for weeks, losing income and risking life for their communities.

The scale of current fires in south eastern Australia has been such that for the first time the various state volunteer bush fire brigades have not been able to help each other, with fire fighting support brought in from Canada, New Zealand and the US. These experienced fire fighters have been used in combination with less experienced local volunteers - the group most at risk because of limited experience - to flesh out teams. 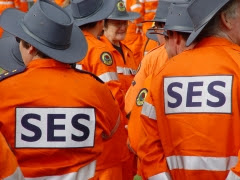 Such high visibility activities are in fact only the tip of the on-going volunteer iceberg. We can see this just by looking at the NSW State Emergency Services web site.

If you look at the web site, you will see that in the first three weeks of January the SES was involved in providing support to help Broken Hill cope with flash flooding and both Wagga Wagga and Nyngan cope with damage from severe storms. Today in Sydney SES volunteers have been involved in helping commuters stranded by the bush fires.

These volunteer efforts draw from and are supported by a whole network of voluntary activities at community level. I saw an interesting example of this at first hand back in the seventies.

I was then working in Canberra and living nearby in Queanbeyan and was active in community organisations. There had been torrential rain, the river was in flood, and there were real fears that the partially built Googong dam upstream might collapse, sending a wall of water into the Queanbeyan central business district. So the SES called for added support from local service clubs to try to do what we could to prepare the town for the worst.

I and my colleagues in the Queanbeyan Apex Club were part of a group working in the main street. Our immediate assignment was one of the local banks. Here we did simple things like putting chairs onto tables and, under bank supervision, moved key papers into the big bank vault. We then put grease along all the door edges to provide a measure of additional water proofing, a messy job.

There was a degree of fear in all this, we were all conscious that the dam might go and had to rely on alarm systems to get the word to us in time, but also a high degree of camaraderie.

Having finished, we were standing on the bridge looking at the rising flood waters when some bloody idiot for a joke yelled out that the dam had gone. There was panic, during which one of my friends moved out into the middle of the bridge. When I yelled to ask him what he was doing, he simply said, well, we are not going anywhere in time. So I thought that I may as well get the best view!

The volunteer system is under a degree of stress just at present. Demands have been rising, while the number of available volunteers especially in critical country areas has been diminishing because of the loss of young people. As a consequence, groups such as our volunteer bush fire brigades are getting older. Hopefully, we can work this through.