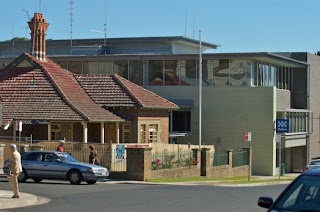 This photo by Gordon Smith contrasts the old Armidale police station (front) with the new one just opened. Gordon wonders how all the police fitted into the old station. I wonder why it is that police stations have become such prominent buildings in so many towns, why a new police station is seen as a sign of civic advancement, why police numbers have risen so much faster than the population as have prison numbers.

In my last post I said that I wrote from a populist perspective, and indeed this is true. It colours every aspect of the way I write. It explains why I don't fit neatly into the conventional political divides, why I am "left" on some issues, "right" on others. It explains why I am against some often currently popular changes, while still wanting radical change in other directions.

Populism is not a politically popular phrase in Australia, although all our politicians adopt populist rhetoric when it suits them. Both positions are understandable.

The first arises because most Australian populist movements challenge the established order in some way, while many have been "right" wing. I have put right wing in inverted commas because while this is the way they are typed they do not fit easily into the always evolving definitions of right and left. The second arises because populist rhetoric still resonates.

In 2003 in Down with elites and up with inequality: Market Populism in Australia, Professor Marian Sawyer discussed the spread in Australia of ideas that she sees as coming from the American Neocons.

I have problems with some of Professor Sawyer's interesting analysis, problems that I will discuss later in the context of my own continuing discussion on changing approaches to public administration and public policy in Australia. At this point I simply want to quote an excerpt from the jingle composed by Bryce Courtenay for the campaign promoting John Howard’s 1988 political manifesto, Future Directions:

Never mind the fancy dancers
Plain-thinking men know their right from wrong
Don’t deal with silver tongues and chancers
Keep your vision clear and hold it strong.
I watched as things began to change around me
The fancy dancers got to have their say
They changed the vision, spurned the wisdom
And made Australia change to suit their way
It’s time we cleansed the muddy waters…

This jingle is clearly populist in its tone and pretty accurately portrays the PM's future rhetoric. Now this brings us to the core problem in populism, the fact that it is a stance not a political philosophy, allowing for a wide variety of manifestations. Here the Wikipedia article on the subject provides a good entry point.

The article begins by noting that populism, by its traditional definition, is a political doctrine or philosophy that aims to defend the interests of the common people against an entrenched, self-serving or corrupt elite.

The article then goes on to note that recent scholarship has, however, discussed populism as a rhetorical style; as such, the term "populist" may be applied to proponents of widely varying political philosophies. Leaders of populist movements in recent decades have claimed to be on both the left and the right of the political spectrum, while some populists claim to be neither "left wing," "centrist" nor "right wing". I belong to this last group.

If we look at Mr Howard's campaign jingle, we can clearly see that it is attempting to capture the populist sentiment, telling the people that they must recapture the system from the "silver tongues and chancers."

Now here I do not want to get bogged down in issues associated with Mr Howard and his stance. My point is that populism is a doctrine capable of many interpretations and applications.

So when I say that I write from a populist perspective, I actually need to define that perspective if my statement is to have other than a very general meaning. Here I said in my last post that I belonged to the New England regional populist tradition. I will look at this in my next post.