Australia is the world's driest inhabited continent. It can also be a hot continent.

The country is affected by two very different weather systems.

Northern Australia's weather is monsoonal. This is the weather system that has led to the current major flooding in North Queensland. By contrast, Southern Australia is affected by the interplay between the Indian and Pacific oceans.

New England sits on the dividing line between the two systems and can get rain from both. This makes it the wettest part of NSW.

Climatologists had focused on warming and cooling in the Pacific Ocean as the major cause of droughts in Southern Australia. However, recent research suggests that the Indian Ocean is far more important than previously realised.

The great droughts in Southern Australia - 1895 to 1902, 1939 to 1945 and the present one - have all been associated with adverse Indian Ocean conditions of sufficient strength to overcome favourable Pacific conditions.

During droughts such as this one, the countryside becomes tinder dry. That plus hot weather creates the conditions for major fire events such as that Victoria has just experienced. A fire that began at Kilmore north of Melbourne spread so rapidly that at least 14 people were burned to death. Another 25 are missing.

The following photo from Channel Nine gives an indication of the conditions fire fighters face.

The speed at which major fires can move is almost unbelievable.

The Australian bush is pretty but deadly. Our native gums exude eucalyptus vapour, a smell that Australians know and love. But it also means that gum leaves burn very quickly. 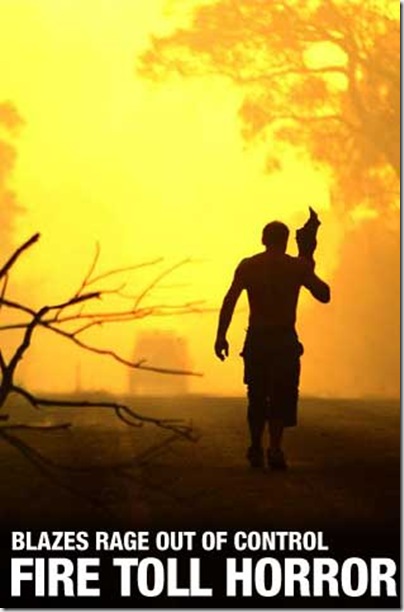 As indicated by this banner from the Brisbane Courier Mail, this creates great heat.

Once the fire gets into the tree-tops, the heat created quickly ignites adjoining trees. As they ignite, the growing heat creates its own wind, leading to firestorms.

Now driven by growing wind, the fire leaps from tree-top to tree-top at increasing speed, changing direction as the wind changes. Gusty variable winds can make firefighting an absolute nightmare.

Driven by fire created winds, embers can be carried long distances, creating new spot fires. The fire front grows, speed increases. The current Victorian fires spread so fast that there was no effective time  to respond. One minute there is just smoke in the distance, the next minute the fire tops the nearby hill, a minute later the trees are burning around you.

As shown to great effect in this photo from The Age, the fires create huge plumes of smoke. This plus the heat can create local thunderstorm conditions. The resulting lightning can create new fires. 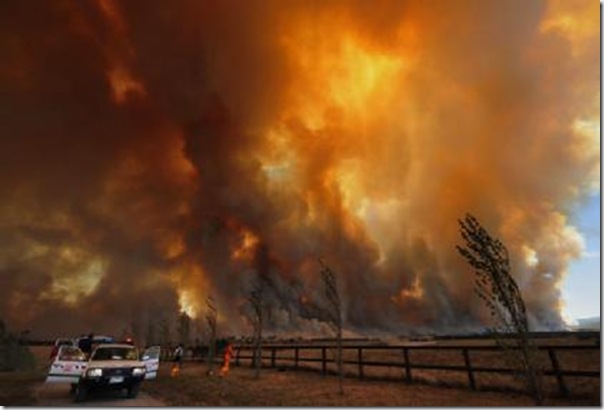 Australia depends on volunteer fire fighters for its front-line bush fire fighting. Each year some die, more have lucky escapes. They continue because of the camaraderie involved.

Australia faces a problem here. We are losing people from many country areas, while those who remain are getting older. Our fire fighters, too, are getting older. There may come a time when there are no longer the people there to provide the volunteer service.

But for the present at least, the volunteer service continues.

Even as I was writing this story, more news was coming through. This is captured in the new Courier Mail banner.

I don't know about you, but to be burnt to death is about the worst death I can imagine.

The number of dead is 26 and rising. Many  of those who died appear to have died in their cars, probably trying to escape.

Australian bush fire  advice is quite clear. If you are prepared and confident, stay with your home since this will give you the best chance of saving it.

If you want to go, go early.

If you cannot do this, stay with you home. A car is no protection. A house provides protection against the fierce heat of the fire front. By the time the house catches, the worst heat should have passed.

Marysville 90% destroyed, is one of the most beautiful country regions in Victoria. As the death toll rises, we are left to ponder on the tragedy.

I am sorry for the delay in responding to your comment, Lexcen. You are right, of couse.

Saw this link on Neil's blog. Thank you for the good info and pics.
I'm very sorry. As someone who goes through yearly conflagrations in our region, my sympathies to all. I know what a toll these take on you --the suffocating smoke during and the stench that lingers for weeks afterwards.

None of the homes lost last October have been rebuilt. Coming on the wave with the economic disaster here in the states, I wonder about the outcome.

One friend ("Angry Parsnip") who was near retirement age lost her home in Laguna Beach in 1993. Financially and emotionally she never fully recovered --even with the insurance. Last year she packed it up and moved to the desert of Arizona where she could leave more cheaply. So the long terms effects are great.

Good to hear from you, Kanani. I have in fact read some of your posts on the US fires. Again, link by Neil. The toll does linger.

I'm sorry to hear that none of the homes have been re-built from last October. The Australian homes will be, although like your friend some of the survivors may decide to move.

I think that Australia's smaller population plus regular smaller emergencies makes it a bit easier for us to organise than in the US.

An article on the homeowners this week indicated that some were having insurance and financing issues.
Some lots have been leveled out, but there are a few ghosts of homes still standing. My son wanted to go out there, but since the people are still reeling --it just didn't seem like our looking around would add much.

As far as the policy of stay or go, I think here we could use mass education on how to protect one's home. Already, we're aware of covering eaves and vents, and also brush clearance (except for the idiot below me with all the pampas grass). Far more people stayed behind this year to fight the fires, and they saved their homes. But in the case of the Victoria fires, I suspected the fires were too hot, were driven by cataclysmic winds, and even if they were trying or wanted to, they couldn't escape.

Interesting comment, Kanani. The thing that appears to have done the most damage in Victoria was a very sudden wind shift. According to Victorian Premier John Brumby, this made getting a warning message through almost impossible. There were also problems with the phone system because of congestion.

The sheer size of the blazes created risks whether you stayed or went. Reading the stories, a number died trying to save stock, some died defending their homes, more died escaping. Motor vehicle crashes and fallen trees blocked roads.

One thing that stood out in the early reports were the exploding gas cylinders. These are common now in BBQs.

At Kinglake, the town's two tankers were out of town fighting fires in other places. There were so many matters of chance - like a locked oval gate at Kinglake that prevented one victim getting into the oval.

One of the TV stations is running an on-line poll on the stay or go policy. This shows a small majority in favour of its abolition. I am sure that it will stay, however, maybe with some modifications.

Still on little things, many of the residents were new, attracted by the life style. I suspect that some had not made the adjustment from suburbia, despite available material and education. There were trees close to houses.

Then there were things like window coverings. In one house that survived with a number of families defending it, they kept the heavy drapes closed - this reduced the heat coming through.

Still on speed, some well prepared people had too little time to use their equipment. Those relying on mains power for things like pumps suddenly lost power.

I understand that the number of houses now known to have been destroyed has passed the 1,000 mark.

On the insurance side, the industry has established procedures for dealing with disasters. However, as in California there will certainly be people who had no insurance or were under insured.

The Government will also help people rebuild, although this will take a little time work out.

I felt sad for these disaster happened in your country, Jim. Especially for the victims.

Here, in Indonesia, when I watched TV, I can not imagine how terribly these disaster.

Thank you, Tikno. It is hard to comprehend, even for Australians with direct experience with fires.

Any idea how fast the winds were blowing towards Marysville?
Caroline