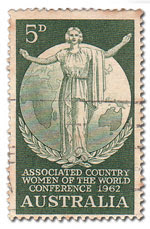 Back last August I carried a story on the New England Australia blog on the history of the Country Women's Association (CWA) in NSW. I was reminded of this by a rather wonderful story tonight on on ABC.

I meant to write a story and will do so on International Women's Day. But in the meantime, the CWA is by far the largest sisterhood in Australia.

Country people have been doing it tough. Part of this is due to structural change in the rural sector, part to the drought.

In all this, men do not talk. They internalise their problems. More young country Australian men killed themselves last year than were killed on the roads. Yet we worry about the road toll.

A number of years ago cousin Jamie was working as assistant manager at the Banjo Patterson Motel on the outskirts of Canberra. His mum, Aunt Kay, was staying with him.

The husband of a couple staying at the motel died of a heart attack. Kay just moved in. She sorted out all the details, let people know, stayed with the women. When I asked her about this, she just said someone had to do it.

This is why I am proud to be Australia.

A few days ago eldest daughter - 19 - was out in town. A friend in the group was taken ill. Eldest and friend organised ambulance, let parents know and stayed at the hospital until the girl's parents arrived.

This is why I am proud to be an Australian.

But the food on the CWA program! I love aspects of traditional Australian country cooking. Watching the CWA program we all sat salivating at the cakes. In this time poor modern world, few have the time to cook the traditional recipes passed on down through the generations. And we are all the poorer for it.

I've been watching this too and have been meaning to mention it. You mention the cakes and scones; what about the jams and preserves? That's something I miss...

Believe it or not, my friend Sirdan still makes them, skills in his case brought from Zimbabwe and South Africa. And he brews his own beer and makes his own bread.

Me, I'm too lazy -- and too unskilled. My mother of course was a dab hand at the scone, the sponge, and the apple pie. Especially the apple pie.