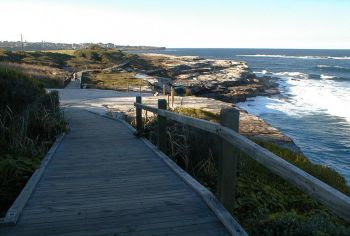 I find the variety in the patterns of human life endlessly fascinating.

Last night was the year 15 dinner, a gathering of parents from eldest's year. Many of the parents are seriously Sydney Eastern Suburbs in the same way that I am seriously Armidale or New England. They were born there, went to school there, have lived there since.

At one point the conversation turned to rock fishing, fishing of the rocky points to be found all along the Sydney coast line from Bondi to La Perouse. I knew little of this, so listened with interest.

Some of Sydney's best fishing is to be found in this strip. However, rock fishing is also very dangerous. Each year an increasing number of people are swept away and drowned.

They talked about the things that needed to be done to minimise the danger. Placing kit in a safe place so that you did not need to worry about it. Wearing the right clothes. Looking at the pattern of the retreating waves so that you knew the danger spots, the maelstroms created by the retreating waves. What to do if you were caught - essentially swim out to sea to avoid being smashed on the rocks.

They also talked about the increasing number of Asian people - new settlers from nearby suburbs - who have discovered rock fishing as a source of fresh fish and can now be found standing on the rocks, sometimes wearing suits and joggers or sand shoes. Those who have grown up in the area and in the water know the patterns of the landscape and of the waves and are all strong swimmers. New arrivals do not and are not. An increasing number die.

I spoke of parents as being seriously Eastern Suburbs. That phrase itself is a sign of change.

When I first came to Sydney as a child, the phrase "Eastern Suburbs" was largely used to describe the suburbs east of Bondi Road, the main drag from Bondi Junction down to Bondi Beach. This was wealth territory. We used to count the expensive cars, cars rarely seen elsewhere.

Some of Sydney's most expensive private schools cluster in this narrow strip, starting from SCEGS Darlinghurst (really inner city) through Ascham to Scots and Cranbrook. This was also a more Jewish area as compared to the suburbs like Mosman across the other side of the Harbour, although the biggest Jewish concentrations were and are to be found on the southern edge extending slightly south and west of Bondi Road.

South of Bondi Road, the demographics changed quickly. Average incomes dropped, houses became smaller, voters turned from Liberal to Labor. This has been blue-ribbon Labor territory for a long while.

At school and then University I knew all of the subtle nuances that marked the social world of old Sydney, although the world of the Shire or of beachside life such as that described by Clive James were outside my ken.

I should probably write something about this at some point because the old Sydney that I knew has largely vanished. For the moment, I would simply note that as an outsider-insider I could hardly not be aware of Sydney's pattern.

I had family who lived or had lived in various parts of Sydney - Potts Point, Rose Bay, Strathfield, Pymble to name just a few places. I played football against the Sydney schools. My first serious girlfriend was a boarder in Armidale who came from Mosman. I went to parties in Sydney, Sydney people came to the country parties - wool shed dances, Bachelor and Spinster Balls, birthday parties. A close friend's mum came from one of the old dynasties and used to tell me stories of past social life while we sat and drank sherry. My family had an extensive contact network in Sydney. Always the outsider in one sense, I yet moved across the surface of Sydney's varying social seas.

Rosebery, where we live, lies at the epicentre of current Sydney social and demographic change.

This is a small mixed industrial-residential suburb that was largely settled by Greek migrants after the Second World War. The Greek influence remains strong. All our neighbours are Greek. However, the tide of change will sweep this away in the not too distant future.

My family looks to the east. Through Kensington, the home of the University of New South Wales where Helen goes, past Randwick Race course where the girls work from time to time, then though Randwick to Coogee and Bronte or the girl's old school.

Coogee, the beachside suburb where the girl's grandmother lives, is a bit less than 6 kilometres away. This is the world of the new Eastern Suburbs, of the changes that have transformed Coogee from a residential area into a beach-side hot spot or turned the Spot into a major entertainment centre. This is also the world of the University of New South Wales, one of Australia's largest universities, whose intake of international students has been large enough to actually change the demographic composition of particular areas.

The Sydney CBD lies just 6 kilometres to the north. In the seven or eight years we have been living in Rosebery, we have seen the creeping edge of inner city gentrification with its wave of apartments move closer and closer.

Two blocks to the west the apartments have crept up Botany Road to Gardner's Road. To the direct north they are now just three blocks away. The Aristocrat poker machine manufacturing complex (Rosebery was the poker machine capital of the world) that formed a three block buffer between us and the apartment wave has been sold. Five blocks away to the north east, Hillsong Church has bought the old Roads and Traffic Authority Headquarters and now plans to build a $40 million mega-church.

The picture changes if we look south. Eastlakes lies to the south east, with its mixture of established homes and public housing.

This must be one of the most ethnically mixed areas in Sydney. The local BKK shopping centre is Chinese owned, with a clear Chinese presence. Inside older Greek blokes sit on the benches or in the little cafes and talk for hours. The Woolworths check-out staff are a mixture of Chinese, Greek, Muslims from several different ethnic backgrounds with head covering. Five nationalities can be on the check-outs at any one time.

Just outside is, I think, a Thai shrine. Across the park young Muslim blokes - mainly Balkan I think - with bogan haircuts spend hours inspecting cars - mainly black with big exhausts.

Move to the south west and the picture changes again. The Greek presence re-asserts itself in a several block thick strip along Gardner's Road. A little further south into Mascot we are back in working class Australia. In recent years Mascot and the further southern suburb of Botany have been the only places towards inner Sydney with reasonable rents, if also with very small houses.

Not for much longer, I fear. With the spread of metro Sydney, the locational advantages are just too great.

Further to the south west, just four kilometres from our front door, lies Kingsford Smith International Airport. Despite the proximity, aircraft noise in Rosebery is quite low (a plane is going overhead as I write) because of the flight paths.

The airport introduces another dynamic into the Sydney change scene. Major international airports are huge economic centres in their own right. Out from the airport towards the city spread hotels and, more importantly, offices and service centres of various types.

Following privatisation, the owners want to take advantage of their greatest asset, real estate. Kingsford Smith has become a huge commercial and retail complex. Now the owners want to extend this, leading to major fights over things like road traffic.

Last, let's move to the west. This is the direction I drive most days. Here within a few kilometres of Rosebery we enter the world of what is now called the inner west. As the name suggests, this is a ring of inner suburbs to the west of the central city. This, to me, is the strangest world, in part because I know it least.

Not quite inner city, it shares many attributes with those areas traditionally classified as inner city. Yet it is also different. At the risk of parody, I classify the differences in this way.

To me, the typical inner-westean turns away from country or sea to focus on the urban, is likely to be an environmental theologian (this is Green heartland), has a strong social conscience, is likely to substitute pets for children, is inclined to new age theology and is a strong supporter of popular causes.

Well, I have spent enough time on this post. I do have a life beyond blogging!

Just by way of encouraging further posts, I want to record how enjoyable and informative I found this entry, and also your musings on 'Old' Parliament House.

And also, yes - enjoy your life beyond blogging.

ps also gave up on T. Blair some time ago. Negative clever-dicks are two 'a penny.

Hi KVD and thanks. Positive feedback always welcome! I do actually enjoy my life beyond blogging, although blogging itself has in some ways become more than blogging. But that's another story.